From Health Crisis to Helping Others: How Janet Newman Used a Book to Create Better Lives 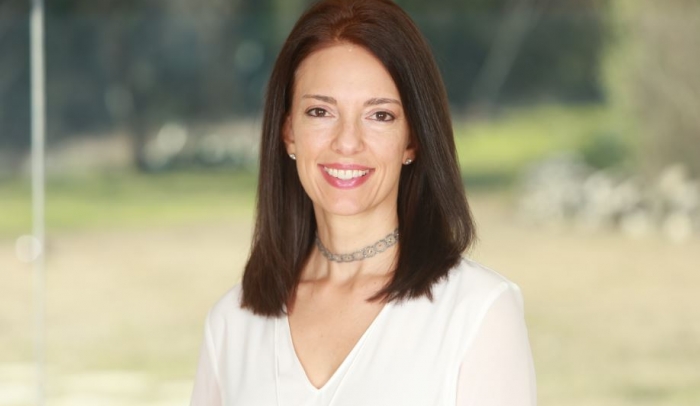 When her mother passed away, Janet Newman was devastated.

Janet was her mother’s caretaker throughout a long battle with cancer, and still grieving. Taking care of her mother had been extremely exhausting, physically and emotionally, and the grief multiplied it all by ten.

As if that wasn’t enough, Janet suddenly began experiencing a crop of her own health issues she couldn’t explain.

Her hair started falling out. She became anxious and had low energy. Digestive issues, bloating, and back pain surfaced out of nowhere. These new issues were all added on top of the usual cast of migraines, thyroid problems, and high mercury levels.

To top it all off, her husband developed a serious autoimmune disorder.

Janet wondered: was there a common denominator in all of her family’s health ailments?

Was there a common suspect that caused or accelerated her mother’s death, her sudden health issues, and her husband’s autoimmune disorder?

And even if there wasn’t, what could Janet do to keep her family as healthy as possible and reduce further risk?

“Watching my mom die of cancer was a powerful motivator; I did not want to follow in her footsteps. Instead, I wished and prayed for a long, healthy life, where I could watch my boys grow up and have children of their own. I realized there is something equally essential as having enough time, and that is good health.”

After her mom passed away from cancer, Janet set out to learn everything she could to keep her family healthy.

Fueled by the determination to uphold her family’s health, Janet entrenched herself in piles of books on health, wellness, and medicine.

Janet learned about the prevalence of toxins and harmful chemicals in our environment, food, and everyday products. She realized that preventing her family’s exposure to these toxins and chemicals would be one of the most powerful ways she could keep her family healthy.

While she was gaining insight and learning valuable information, there was a problem: the sheer volume of information was overwhelming. 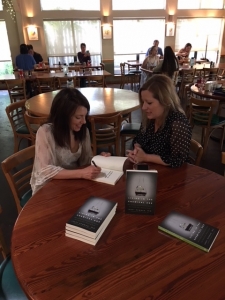 While all the information was out there, much of it was highly technical and academic. The dangers of toxins and chemicals were clear, but the solutions weren’t. Identifying all the toxins and chemicals in everything we consume (and are exposed to) was hard enough, and finding practical alternatives was even harder. In many cases, Janet had to connect the dots herself.

During her research, Janet kept looking for a central resource that pulled all the information together in one accessible package. She wanted to find the book she could pull off the shelf and learn everything she needed to know about a practical, preventive approach to environmental toxins.

Janet soon realized that book didn’t exist. So she decided to write it.

Janet struggled with organizing her ideas and writing consistently.

At first, the decision to write the book was like a lightbulb moment. Everything seemed to click.

Janet knew she had valuable information to share, in a way that hadn’t been shared before. And after watching her family suffer the negative side effects of chemicals and environmental toxins, she felt compelled to equip others with the same information she was forced to learn herself.

But when Janet sat down to actually write the book, she struggled.

Janet didn’t know how to organize the book or structure each chapter. And she struggled with clearly articulating her thoughts; she realized there was a difference between having knowledge and communicating it in layman’s terms.

Janet wanted to write a book that would make a difference in people’s lives. She knew the importance of what she was writing, but as a first-time author, it felt like she didn’t have a compass to guide her through the process.

The entire undertaking began to feel like walking in circles. And naturally, this led to procrastination.

“I’d wake up in the morning and I’d say, ‘I’m going to take two hours this afternoon while the kids are at school, and I’m going to just do some writing and research.’ And that would be great. But then there’s always excuses or procrastination that comes up. ‘Oh, I’ll get to that later.’ Or, ‘I’m not going to write today.’ And then like three days go by. And it’s sometimes hard to get back into the groove.”

Janet knew friends that had taken five years to write a book. As a busy mother of two young boys, she understood how that could easily happen. Life gets in the way.

But at the same time, Janet knew she couldn’t take five years to write this book. People needed this information now.

The sooner they learned about the dangers of everyday toxins, the less likely they would be to develop the same health ailments her family was struggling with.

When she found Scribe, Janet worried that getting help to write her book might dilute her voice.

But once she started, one of the first things Janet noticed was that having a defined structure made the entire process of writing her book much more manageable.

“It was very organized and very structured, and I was part of a process. It helps to know that someone who’s done it before is watching the whole process, and that they’re not going to let anything slip. This actually helped me focus on getting my voice right.”

Janet also appreciated the accountability of being on a timeline with specific deliverables. Scribe’s process broke the previously daunting challenge of writing a book into small, actionable chunks, which helped a lot with motivation.

As long as Janet remained committed to Scribe’s process, she only had to focus on providing her expertise and her voice, and the rest would be handled by a team of experts who’ve published thousands of books.

Before working with Scribe, Janet wondered if she would ever be able to write and publish her book.

But once she found Scribe, Janet no longer had to worry about whether her book would ever become reality.

The only question was when it would be shared with the world. 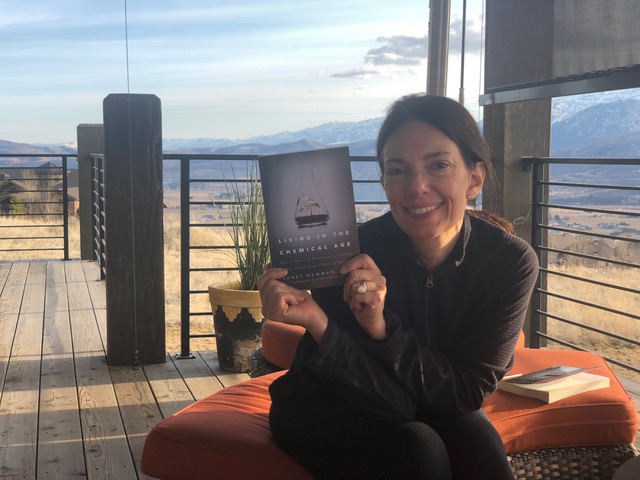 It wasn’t all easy: as a first-time author, there were lots of unknowns and stressful moments right before publishing.

Even though Scribe helped Janet write her book, the process was not easy. 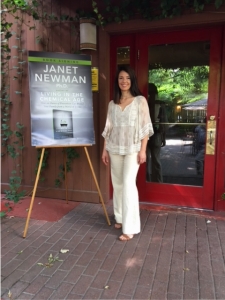 There was a lot of work involved, and many unknowns surfaced along the way. The most difficult part for Janet came right before the book was published.

“I had a lot of anxiety before the launch. Was this book going to be well-received? Was it good? Did I do enough to make it a whole, solid book? What would the reactions be? It was just a total unknown realm that I just had no idea what the outcome was going to be.”

Despite her anxiety leading up to the launch, Janet knew that her book was important, valuable, and could make a meaningful difference in people’s lives.

Ultimately, Janet decided that sharing her wisdom with the world was more important than keeping her voice silent and bending to the unknown.

“The book needed to get out there, there were people who needed the information to improve their lives, they are more important than my ego, and I just said, ‘I’m going to let it happen. And if it’s a flop, then so be it.’”

After publishing, Janet got speaking opportunities, podcast appearances, and her book became an Amazon Best Seller.

Since publishing, Janet’s been able to connect with influencers in her field and has a new level of credibility to share her message with the world.

Her book Living in the Chemical Age quickly became an Amazon Best Seller, and Janet has been featured on nine different podcasts including The Wealthy Wellthy Podcast, Lyme Ninja Radio, BrainTap, Fearless Fabulous You!, 40+ Fitness, and VoiceAmerica (which has over 100,000 subscribers). 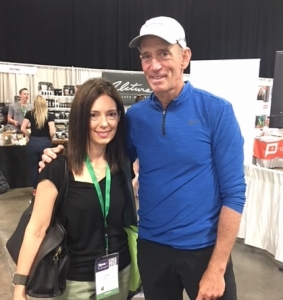 Janet’s also been featured in multiple articles, has spoken at local events in her community, and has contributed to a movement that forced Lowe’s and Home Depot to recall a line of toxic paint strippers.

Janet was also invited to attend an exclusive, invitation-only event in her field, where she met and connected with her idol, Dr. Mercola, who she’s been following for the last fifteen years. Dr. Mercola requested a copy of her book, and mentioned he may use it as research for a new book he’s writing.

The greatest reward for Janet has been sharing the knowledge she had to learn firsthand, and seeing her readers’ lives change.

Her family’s health issues forced Janet to become an expert on a preventive approach to environmental toxins.

Instead of keeping that knowledge to herself or succumbing to fear, Janet turned her adversity, insight, experience, and expertise into a book and shared it with the world to help others live healthier lives. She put the benefit of her readers first…and it ended up being more rewarding than she could have ever imagined.

The speaking and media were nice, but what really matters to her is the impact the book has had on real lives. Several times a week since the book was released, Janet receives reviews, testimonials, and messages from people who’ve read the book and started making small changes in their daily lives.

“It’s really gratifying to help make little changes in people’s lives and make them more aware, because I couldn’t have one-on-one conversations with all of these people. The book has given me… it’s more than a platform. It’s my megaphone.” 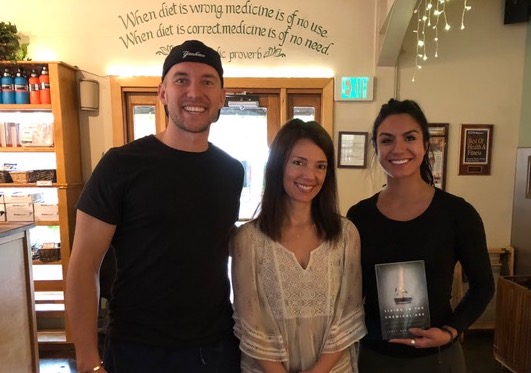 In addition to helping her readers live healthier lives, writing the book has helped Janet find her voice. It’s helped her intuitively grasp that what she has to say is both important and valuable.

“I found my voice. That’s really the easiest way to describe it. The book has helped me to really express myself and feel like what I have to say is not only important, but that people want to hear it. And so that’s kind of a new muscle for me. It’s something I had to get used to. If I had to wrap it up and put a little pretty bow on it, I’d say I found my voice.”