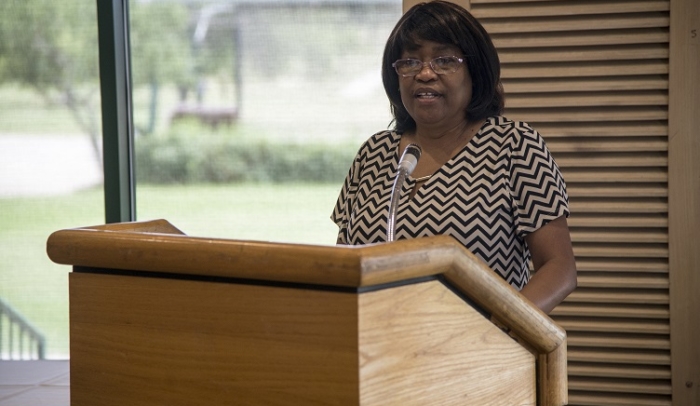 When Lieutenant Colonel Myra Evans-Manyweather retired from the United States Air Force after more than twenty years of service, she found herself facing an obstacle she hadn’t encountered since she was a teenager: an uncertain future.

Myra’s life had long been defined by serving her country. Now, as she considered the next step in her career, that sense of service was replaced by an overwhelming feeling of stress.

She interviewed at a couple banks and credit unions with ties to the military, but the jobs she was applying for felt disconnected from her purpose, so she didn’t pursue them.

Then, one day, Myra had an epiphany.

“I decided there’s nothing else I want to do other than serve. That’s my calling.”

She envisioned a future where she could help women like herself who were struggling to figure out their next step in life. She saw herself as their coach, encourager, and champion.

With that guiding light in front of her, Myra began an entrepreneurial journey that resulted in her co-founding Global e-Talent Network 7.0. Today, Myra works to bring the stories of talented entrepreneurs together so new organizations and opportunities can emerge.

Where her clients once saw uncertainty, she helps them see possibilities.

Despite helping people share their stories, Myra didn’t consider sharing hers until a friend pointed out the obvious.

What Myra discovered after starting her business was that even though people knew she’d served in the military for two decades, nobody truly knew her as a person.

As a storyteller looking to connect entrepreneurs, she first had to connect with them. The only problem was that Myra didn’t recognize the power of her story. She saw herself as a coach, not a writer, so as she urged clients to share their stories, she kept neglecting to share her own.

Finally, a friend gave her a much needed wake-up call. It was time for Myra to write her book.

Myra was skeptical. Was there really value to be found in her story of growing up in Jim Crow Louisiana, living in a house with cardboard walls, and being told by neighbors she shouldn’t go to school? Did people really need to know she struggled with depression and low self-esteem for years, and that she’d been to counseling to deal with issues stemming from childhood?

Myra realized sharing her story would give people an authentic look at her life and the reason for her work. Far from defining her, those experiences would help others understand her—and then through her story, understand themselves better.

“Writing the book was an opportunity to let people know how much I care, who I am, and what I went through. I’ve gone through struggles myself and overcome them, which leads me to believe I can help others overcome their struggles, too.”

Myra needed help structuring a story that she’d previously shared only as a means of catharsis.

Even after she decided to share her story, the idea of writing a book scared Myra to death. Writing had never come naturally for her. She’d kept a diary as a kid and journaled as an adult on the recommendation of her counselors to help her deal with painful situations.

Looking back at those journals, she found notes she’d written through tears that made little sense years later. It was pain poured out on the page, written during a moment as a means of getting through that moment.

There was no order to her writing—only a sense of catharsis. This was helpful to her at the time, but wouldn’t be useful to anyone reading it now.

What she needed was someone like herself: a facilitator who could pull the story out of her, give structure to it, and bring it to a natural conclusion—things she’d never done effectively.

The instant connection Myra felt with the Scribe team didn’t dispel her fear that she wouldn’t be understood.

It was at a seminar that Myra first learned about Scribe. Right away, she knew this was the means by which she would finally share her story with the world.

From the first conversation with Scribe co-founders Tucker Max and Zach Obront, Myra knew she was in good hands. The trio instantly connected, and when Myra met her scribe, Denis, they formed a bond that only deepened her comfort level with the process.

“I cried with Denis. I shared personal stuff with him. What I liked the most was that each person at Scribe treated my book like the most important thing in the world.”

Despite her sense of comfort with everyone at Scribe, Myra still brought fears into the writing process. She harbored a nagging doubt that what she told Denis wouldn’t make sense.

When combined with the criticism she’d heard all her life that she talked too much, Myra was terrified that the hours she’d spend with Scribe would result in a lackluster book.

Scribe got Myra’s project back on track after several delays.

Thankfully, Myra’s anxiety began to melt away with each content call. But as the project reached the latter stages, she encountered a new challenge: things got stalled.

Busy with her business, Myra had no problem putting her book on the back burner every time a delay popped up. Instead of letting the project screech to a halt, Zach called Myra to let her know Tucker would be helping her get the book across the finish line.

“I was well taken care of during the process. They were always calling to check on me, asking if they were doing everything they needed to do. I knew they cared about me and the outcome of my book, and I also knew they wouldn’t let me put out junk.”

With regard to the book, Myra loved the work she and Denis were doing together, but she still wondered how young women would respond to her story. That’s when Denis did something unexpected: he gave the manuscript to his daughter to read and offer feedback.

Myra was on pins and needles. Hearing that the book hit the mark would offer validation for all the effort she’d put into crafting this story and encourage her to finish strong.

When she received word that Denis’ daughter loved the book, she was elated.

“For Denis to share my book with someone close to him meant a lot to me. He didn’t have to do that. Getting her feedback told me what we were doing wasn’t in vain.”

Myra’s book has helped her connect with new coaching clients whose entrepreneurial efforts are changing lives. 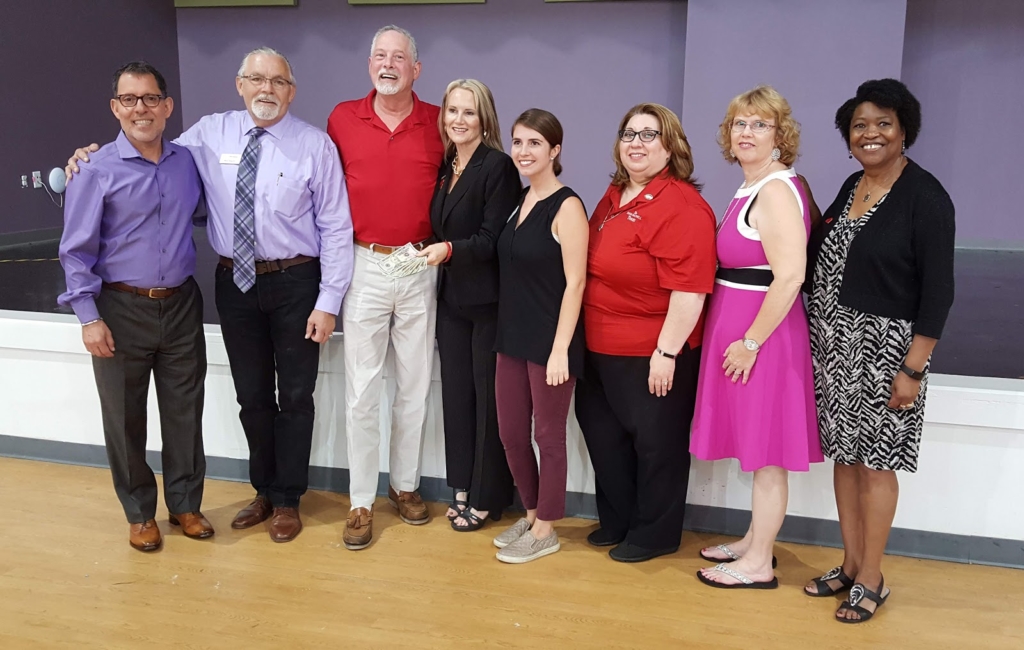 Myra published Start Where You Are in July 2016. Right away, she noticed a shift in how people treated her. Those who ignored her before now had all the time in the world to talk with her.

Myra never expected the credibility boost her book gave her in the eyes of her peers, nor did she anticipate the newfound confidence she felt as a published author. In fact, the little girl from Coushatta, Louisiana, would’ve told you it was impossible to feel that good about yourself.

Not only did the book change Myra’s life, but it also changed her business.

By using her story to forge a connection with potential clients, Myra has been able to work with entrepreneurs whose efforts are truly changing the world for the better.

For example, after publishing, Myra connected with a frustrated author and shared what Scribe had taught her: there are other ways to use the book you’ve written. Myra’s client began working with others to self-publish their own books, including a woman from Myra’s church who wanted to share the journey of her autistic son and the lessons she’d learned about autism.

“This mom was so excited because she never thought publishing a book would be her reality. She has this manuscript but didn’t know what to do next. All I did was listen to her story, then connect her with someone I knew could help her publish it.”

Her work before and after the book earned Myra the Blacks in Government Meritorious Service Award in 2017. That same year, she and other members of John Maxwell’s team helped bring his Live 2 Lead event to over 300 people at Morgan’s Wonderland Park in San Antonio. Myra was also the guest speaker at the 2019 African American History Luncheon hosted by the 502 ABW at Lackland Air Force Base in San Antonio.

“Success for me isn’t measured in dollars. To see someone’s face light up when they realize their dream, that’s an indescribable moment I can’t put a price tag on.”

Myra has inspired others to pursue a new direction for their lives. 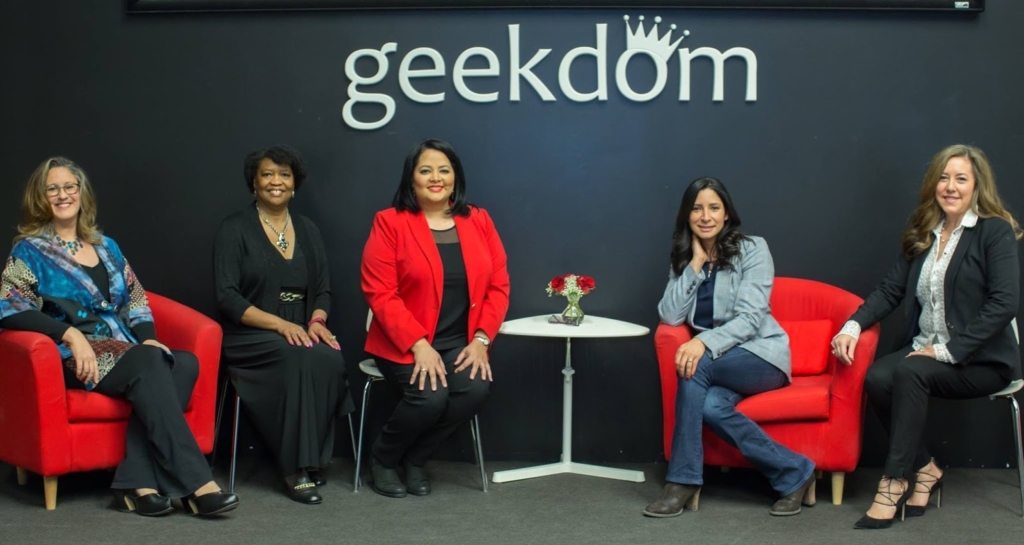 Every week, Myra gets contacted by people who read her book and want help making their dreams become a reality. One lady reached out to Myra after booking meeting space in Geekdom, a collaborate working space in San Antonio where Myra is a member.

Inspired by Myra’s book, she wanted to host an International Women’s Day event, but needed help with logistics and finding speakers. Myra jumped right in and got to work.

The event they put together drew 100 attendees and offered women the chance to share from stage how they’d gotten up from where they were and done something else with their lives.

At the end of the night, Myra felt certain every woman in attendance left that event knowing it wasn’t the end of the road for them. Even if they’d just been let go from their job—like the event organizer had been—it just meant another door would open soon.

“The event reminded me that it’s not all about getting paid in the traditional sense. It’s about giving others hope so they, too, can realize their dreams.”

Here are a few other readers who’ve been inspired by Myra’s story: