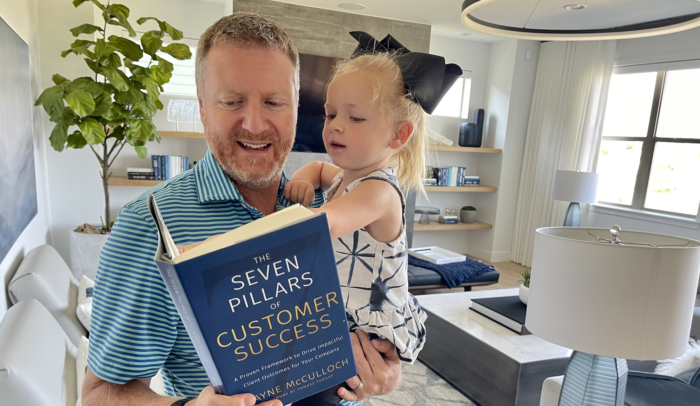 For more than 20 years, Wayne McCulloch has worked as a customer success professional for some of the biggest companies around. He’s watched CEOs, marketers, and everyone in between buy expensive software with the hope that their new tech is the secret to capturing their customers’ journeys and elevating the customer experience.

Wayne has also seen—more times than he can count—those same hopes turn into stress and frustration when people realize that, despite spending thousands of dollars on fancy software, they’re no closer to unraveling the mystery of customer success than they were before.

Wayne has made it his life’s mission to help those people find the answers they’re missing. He wants to show them how to turn customer success into a reality: how to set up processes and flows, how to use their software to do amazing things for their customers.

Wayne knows the people he’s trying to help aren’t lacking in vision. They just don’t know how to make that vision a reality—but with his help, they soon figure it out.

“I get to help the people who are using the software become wildly successful in their careers and, ultimately, build amazing lives for themselves and their families.”

Wayne spent several years working at Salesforce. During his time there, he soaked up the secrets of customer success from the best of the best. He was at the top of his game—until he left Salesforce and joined a new company that was eager to implement a winning customer success program too.

“Even though I was using all the best practices I had learned at Salesforce, I struggled to replicate my success.”

He refused to give up, though. Instead, he sat down and started trying to figure out why things weren’t working. He talked to thought leaders, read blogs, attended conferences, and questioned his peers.

They all had advice to give him, but nobody could tell him the why behind their advice. That’s when he realized the problem: there was no customer success framework. And without a framework, it was impossible to translate what worked in one situation into something that would work in another.

Over time, Wayne built his own framework. He saw how well it worked, and suddenly, he had a light bulb moment. Why not write a book that would share his framework with other people? He knew firsthand how great the need was, and he knew his framework could make customer success accessible for people in every sector and every industry.

Writing a book had other benefits, too. It would validate the concepts he had worked so hard to develop. Even more importantly, it was the perfect way to act as a mentor for people he would never reach otherwise. For Wayne, who has always loved teaching and guiding others, that idea was irresistible.

Wayne struggled for 18 months to find the time to write the book on his own. 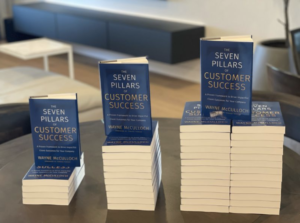 Once Wayne decided to write a book, he tried to carve out time to do it. But he’s an executive at a software company, and between that and his family (which includes several young children), he doesn’t have a lot of time.

For months, he tried to write, but it was a huge struggle. He spent every Friday and Saturday from midnight until 2:00 AM in front of the computer—but after 18 months, all he had to show for his time was a Google Slide deck full of jumbled, random notes.

He was overwhelmed. Not only was he nowhere close to finishing his book, he also didn’t have the faintest idea what to do next.

“I was stuck—I had no idea how to take my slides into written form, and even if I could do that, I had no idea what the next step in the process was.”

Wayne realized he needed help. The only problem was, he had no idea who could help him transform his vision into reality—ironically, the very same thing he helped other people do every day.

Wayne thought about hiring a ghostwriter, but he kept hearing horror stories about how badly things could go. He kept looking, determined to find a reputable, experienced company that could help him with every single part of getting a book to market.

Eventually, Wayne stumbled across Scribe, and the way they articulated their process intrigued him.

While researching publishing companies one day, Wayne happened upon Scribe’s website. Immediately, he was impressed with the plethora of resources they offered for every single part of the writing and publishing process.

“Scribe took me on a journey of everything I needed to know for a successful book launch—they articulated all the boxes I needed to check to be successful.”

It was clear to Wayne that not only did Scribe know what they were doing, but they had done it successfully hundreds of times. Their transparency was refreshing, and he was impressed that they freely shared all their expertise about how to successfully write and launch a book.

But, Wayne was realistic. Even though Scribe laid out the writing (and launching) process clearly, he knew he didn’t have the time or know-how to do it by himself. But because they were so open about each step, he trusted Scribe knew what it was doing. The clincher was when he realized how customizable their packages were, depending on how much assistance he wanted. There was no more doubt in his mind: Scribe was the perfect partner for him.

Before he could bring his book to life, Wayne had to find a way to get past his fear of falling short.

As soon as Wayne signed up with Scribe, though, he started worrying.

“I questioned whether my book was good enough and whether anyone would read it and, if they did, if they’d hate it and start trolling me on social media.”

His perfectionism made those fears even more intense. But his team at Scribe stepped up and helped him realize he was putting years of experience into the book. They reminded him that there were so many people in his industry who didn’t have that experience and were struggling as a result. They reassured him that his book would resonate with those people and guide them to success.

His team was patient, too: they listened and responded to every question he had, every edit he made. They kept working with him, even when he kept asking for one more change or one more revision. They helped him take that jumbled slide deck and tease out the pillars of the framework he had built, and then show people how to apply those pillars to their own unique situations.

Ultimately, they proved his faith in them wasn’t misplaced. They were thoughtful, reassuring, and committed to helping him succeed in any way he needed.

Wayne’s book lit a fire in the customer success world and helped him land the job of his dreams. 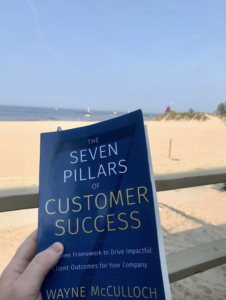 Turns out, when Wayne’s team at Scribe was reassuring him that his book was going to be a success, it wasn’t just lip service—they knew exactly what they were talking about. Wayne sold over 2,000 copies of The Seven Pillars of Customer Success in the first few months after launch. He’s added 2,500 more connections on LinkedIn, and many of those people have reached out to connect with him directly.

It doesn’t stop there: the book has helped him create a platform beyond his wildest dreams. Private equity firms and venture capitalists frequently ask him to look at their portfolio companies and advise them about how to improve their customer success departments. In many cases, those same companies have also invited him to join their boards.

Wayne continues to be amazed at all the doors the book has opened for him. He went from having one executive recruiter reaching out to him a few times per month to five or even seven contacting him every single week. CEOs of well-respected companies also reach out regularly to offer him a job.

“One of the people who reached out to me because of the book offered me my dream job, which I’ll be starting in just a few weeks: I get to build a new software category and help reshape the culture of the company.”

The book’s momentum shows no signs of slowing. Software companies around the world ask Wayne to present at their conferences. Podcasters are contacting him for interviews. Clearly, the customer success industry was hungry for the kind of framework Wayne built, and they are embracing it—and his book—with open arms.

Wayne’s book is helping people in every industry succeed in their careers.

Since the book launched, thousands of people have sent Wayne notes about the impact the book has had on them. Each time he gets one, he has to pinch himself. Not only do they validate his framework—which was his first goal for writing the book—but they are clear indications that he has achieved his bigger goal: to act as a customer success mentor to people on a large scale.

Recently, a customer success professional told Wayne that he’d been struggling to make an impact in his company. He read Wayne’s book, reconfigured how he was communicating, and changed how he measured success. Within a few months, he was elevated into conversations with the board and other executives. Because of the book, he told Wayne, he’s finally making the impact he always knew he could.

Another woman reached out to tell him she had read every book and watched every YouTube video about customer success she could find. Until she read his book, though, nothing made sense. But once she found The Seven Pillars of Customer Success, she was able to put the pieces of the puzzle together.

“Hearing all the ways the book has impacted people in some way… I mean, there’s no better feeling.”

Ultimately, knowing that he was able to transform how so many people execute and focus and drive value makes the entire journey worth it. Wayne has accomplished what he set out to do—and in the process, he’s found the job of his dreams and helped to elevate and shape an entire industry.

Here are a few more things people are saying about The Seven Pillars of Customer Success.