Charles Daly’s Life of Service Inspired a Book That Encourages People to Ask “What Can I Do For My Country?” 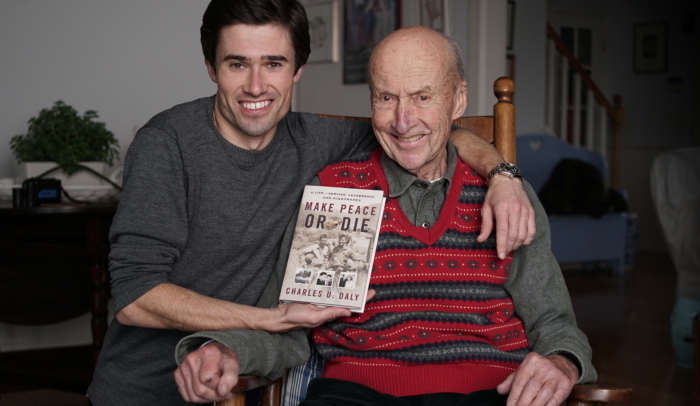 Charles Daly is many things.

He’s a war hero, the last living member of JFK’s West Wing congressional liaison staff, former Vice President of Harvard, past director of the Joyce Foundation, former director of the Kennedy Library Foundation, husband, father… the list goes on and on.

Most importantly, though, Charles (known as Chuck to his family and friends) is a man who has always believed that no matter what life throws at him, he can choose to make peace with it.

This core philosophy is what allowed him to overcome the horror of seeing his brothers-in-arms killed in war, of witnessing political assassination, of being shot in the line of duty, and despite it all, living a life focused on serving others.

It wasn’t always easy. But Chuck, who is now 93 years old, never let that stop him.

“A distinguished Marine once found out I had gotten a silver star and a purple heart, and you know what he said to me? ‘What have you done for your country lately?’ And he was right: as a citizen, I have a duty to this country. I think all of us do.”

Those aren’t empty words for Chuck. His life has been devoted to service: to the armed forces, to the college students he educated, to the White House during his time working there, and to his four sons. Chuck’s drive to serve has never faltered—not even in his tenth decade on this planet when he decided to serve in a different capacity: by sharing his story with the world.

It was a daunting prospect, but Chuck wanted to inspire other people to ask themselves how they could live a life of service. So, the only question in his mind was simply, “Where do I start?”

Chuck wanted to write a book for decades.

This question had nagged Chuck for decades, stretching all the way back to his time working in the White House under President Lyndon Johnson. After Kennedy was assassinated and Johnson became president, Chuck was horrified. He hated Johnson—hated his vulgarities and how he treated our armed forces. Chuck had served a decade earlier, and the idea of Johnson becoming president was beyond painful.

That’s when Chuck decided to take action. He began taking notes on index cards about everything going on around him. His plan was to use those notes to write a book. It wasn’t long, though, before he got stuck. No matter what he tried, he couldn’t figure out how to talk about Kennedy’s assassination or Johnson’s mistakes in a way that helped anyone, so he decided to set the project aside.

However, that desire to write a book never left him. As the years went by, Chuck reflected on the trauma and hardship he had experienced. He thought about seeing men under his command die in the Korean War, about the year he spent recovering from a gunshot wound sustained in battle, and about being part of Bobby Kennedy’s campaign before he, too, was assassinated.

But Chuck didn’t just focus on the pain of those events. He thought about what they had taught him.

“I’ve seen so many people conquer terrible wounds of the mind as well as the body—I was shot myself and spent a year in the hospital recovering—and as terrible as it was, I realized that pain and agony don’t have to destroy you.”

Chuck knew that we all encounter trauma, but he also knew that we always have a choice about how we respond. That’s when his decades-long desire to write a book and his lifelong commitment to helping others merged into one idea: living a life of service, even when it’s difficult.

Even with a clear focus, Chuck continued to hit obstacles. 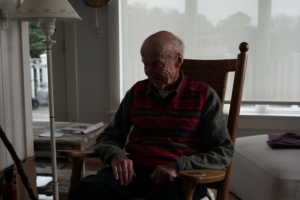 Chuck knew what he wanted to write about, but now he returned to that age-old question: how could he take what he knew and make it beneficial to the reader?

The first obstacle Chuck faced in achieving this was the sheer horror of the experiences he wanted to share. While he knew these experiences had shaped him into the man he was today, reliving them was painful.

He asked his son, Charlie, for help. Charlie reached out to the men Chuck had served with (and, in some cases, their widows) and interviewed them. But even though Charlie was there to help him write about those personal and painful topics, Chuck faced other difficulties.

As Charlie recalls, his dad had several hundred pages of notes…and Charlie’s interview notes numbered almost a thousand pages. It was a lot of material. How could they take all the events of his life and pick out which stories to tell and how to present them?

They were stuck—until Charlie took Scribe’s course about how to write a memoir. The duo used what Charlie learned to create a manuscript, and they started pitching to traditional publishers.

Months passed without any definitive responses. An agent they worked with early in the process told them that trying to find a publisher could take a year. When (and if) they signed a book deal, it could be another year, at minimum, before their publication day arrived.

“It’s a long process, and there are no guarantees at the end of it, either. All that work, and you don’t even know whether you’ll get published or not.”

That wasn’t good enough. So, Chuck and Charlie kept looking. 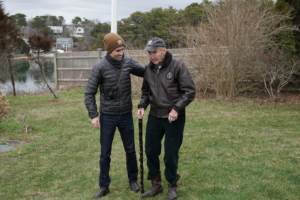 Scribe had already helped them get through one obstacle. So, when they hit a wall with traditional publishing, they turned to Scribe once again.

Chuck and Charlie were interested in Scribe’s process, but they wondered how it would differ from self-publishing, which left authors to figure out the marketing on their own.

“What you end up with is a basement full of copies you’ve paid to print with no strategy, no way to get those books in anyone’s hands.”

They needed support. Neither of them knew anything about how to market a memoir. What they did know was that without the right strategy, there was no way to get the book into people’s hands.

They couldn’t bear the idea that all that work—the hundreds of interviews, the dredging up of painful memories, the countless hours Chuck had spent dreaming about writing a book—would be for nothing. They had to find a model that would help them get the book to the people who wanted and needed its message. They just weren’t sure if Scribe was that model.

They quickly found that Scribe was exactly what they needed.

Charlie decided to reach out to Scribe and see what would happen. It wasn’t long before he and Chuck realized that Scribe wasn’t self-publishing or traditional publishing—it was something else entirely, a third option that checked the boxes that mattered most to them.

Scribe gave Chuck his own dedicated team to help guide the book through the publication process and support its launch. And his team moved quickly; it didn’t take years, but rather months.

“Once we got started with Scribe, everything was prompt. It was such a refreshing experience, not having the months of waiting to hear back.”

Plus, as part of their work together, Chuck’s team at Scribe helped him shape the manuscript so that it captured the most important lessons of Chuck’s life. Both he and Charlie loved how it captured Chuck’s ideas, stories, and ideas—all while maintaining his voice.

The long, winding road Chuck took to become a published author culminated in an unforgettable moment. After all the setbacks getting the book together and all the time wasted pursuing a traditional publisher, Chuck celebrated his 93rd birthday with his book in his hands. 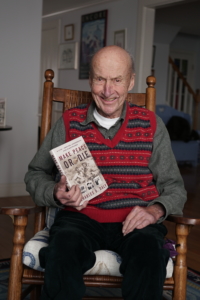 Success for Chuck didn’t look like it does for many authors. He wasn’t looking for new clients, hoping to increase his revenue, or trying to speak on bigger stages.

He simply wanted to connect with readers and find an audience for his book.

With Scribe’s help, he was able to do that. On Amazon, Make Peace or Die hit #1 in the war and peace category. In fact, it ranked higher than books by Ronan Farrow and Noam Chomsky.

“Any day you can outsell Ronan Farrow and Noam Chomsky is a good day.”

Chuck also started seeing many sales from local bookstores, which meant word-of-mouth was spreading. People were clearly making an effort to get their hands on a copy.

But the book wasn’t just doing well at local bookstores. It was selling out. The fact that the book was published during the COVID-19 lockdowns—meaning Chuck wasn’t able to do any in-person events or signings—made this achievement even more exciting for him.

By every measure he’d set for himself, Chuck’s book has been a smashing success. In the months since it launched, sales have been steady, with no tapering off at all.

Ultimately, though, it’s about much more than sales.

“If we can inspire someone through this book, we’ve done our job.”

Chuck’s book has inspired people throughout the world.

If you want proof that Make Peace or Die has inspired many people, you don’t have to look very far. People of all ages have contacted Chuck to tell him how much they loved the book.

“People in their twenties and thirties have reached out to tell us it inspired them to read other books about the Korean War and research that time period and those events.”

People throughout the world have connected with Chuck to thank him for his service and to tell him how much he’s impacted them, including a young man in the Korean Marine Corps, who thanked Chuck for the role he played in saving Korea.

Writing this book brought Chuck full circle. Early on, he decided his life would be about service, no matter what obstacles he faced. Now, he’s able to share those hard-won lessons with people across the world and inspire them to do the same.

His book has made people reflect on how they can be of service, even in the face of hardship. For a man devoted to making the world a better place, there is no greater reward.

Here are just a few examples of people who’ve been inspired by Chuck’s book: