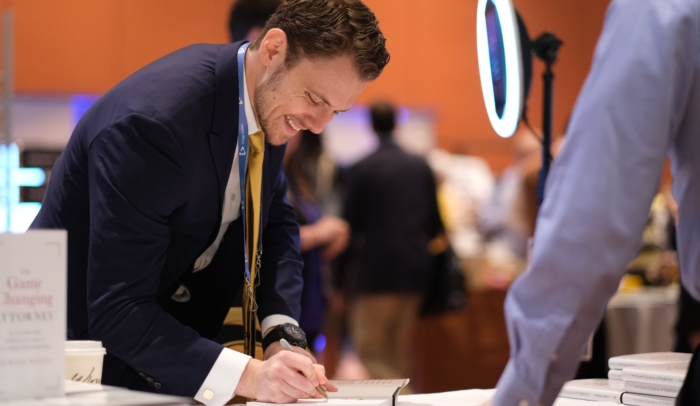 The best cases go to the best marketers.

It’s this unfortunate truth about law firms that fuels Michael Mogill every day. Michael knows the difference between choosing a great attorney who cares deeply and an average one who doesn’t. It’s a difference that can determine whether or not a family is able to put food on the table during trying times.

What he found was that the smaller firms, no matter how great they were, didn’t have a voice in the market. The big firms with money drowned out the small firms with heart.

Michael recognized that law schools are far better at teaching law than how to run a business. Knowing this, he saw an opportunity to bring his years of big brand marketing expertise to an industry thirsty for differentiation. His company, Crisp, is now dedicated to helping these smaller firms tell their story, stand out, and have a fighting chance in the saturated, competitive, and commoditized legal industry.

“You could be a really great lawyer, but unless you know how to get out in front, you’ll be at a significant disadvantage.”

Michael saw a book as the differentiator he needed. 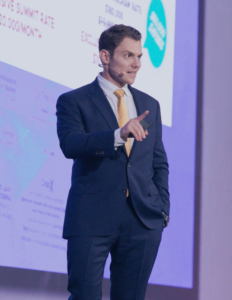 The clarity Michael brought to law firms helped him realize that he needed a differentiator of his own. After years of giving presentations, keynote speeches, and webinars, he knew there was another level he could reach. That’s when he realized what he needed to do.

To go all-in with his mission, Michael needed to write a book. It would be a way to pay it forward and lower the barrier to entry for smaller law firms that couldn’t afford to work with Crisp. He saw his book as the guide he wished he’d had when he started his business.

A book would also help Michael build his personal brand. While the company was doing well and reaching new clients, he understood that he was still the face and heart of it. People needed to trust and feel good about working with him as well as the company.

Last, and perhaps most significantly, he was done playing small. Done.

“If you’re serious enough and believe in what you’re doing, and if you want to help people, at some point you have to go all-in and you make that type of commitment.”

To hold himself accountable for his big commitment, Michael announced his book at the Crisp Game Changers Summit in November 2018 in front of thousands of people.

That’s when the real work began—it was time to start writing.

Michael knew authors who’d sat down and typed every word of their book. He also knew, without a doubt, that he wasn’t going to pursue that path. Early in his career, Michael learned to play to his strengths. It’s part of what made his business so successful.

So while he enjoyed writing, he knew it wasn’t his strong suit. At least, not strong enough to write the type of book he wanted: the definitive book on legal marketing. He wanted a book he would see at the front counter in Barnes and Noble. He wasn’t going to put his name on just any collection of pages, which meant he needed the best to help him.

Besides, even if he wanted to write the book, he didn’t know how to create a book—from the structure to publishing to even the marketing (which was far different than what he did).

“I wanted to work with an established organization that was doing things the right way, that could help me and guide me—just like I do for my clients.”

So, instead of sitting down to write, Michael set out to find the right team. 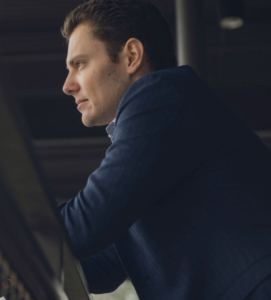 Early on in his search, one of Michael’s trusted friends (who was also a best-selling author) sang Scribe’s praises. His friend recounted how the experience was superb, the process was powerful, and the final book was beyond expectations.

After looking at the company as a whole, Michael was quickly convinced that he found the gold standard in book publishing. It wasn’t just the long list of best-selling authors that impressed him; it was that Scribe offered him every option to create an impactful book that would stand out from the mountain of mediocrity on the digital shelves. Plus, it was truly a start-to-finish approach. There was no need to look anywhere else.

“You can’t say you want to do the best at something and then half-ass every other decision. I went all-in and got the full package.”

But even with Scribe by his side, Michael carried concerns into his book-writing journey: Did he have enough content? Would his book suck? Hadn’t it all been written before?

These doubts swirled in his head before his first call with his Scribe team.

On that first call, Michael laid it all on the table: every fear and doubt about his book that was chipping away at his confidence. That’s when something remarkable happened.

One by one, his Scribe team addressed his fears. He didn’t just have enough content for one book; he had enough content for three books. Had there been other legal marketing books written before? Sure. But never one from Michael Mogill, with his unique voice and wisdom.

The level of professionalism and honesty he received from each person at Scribe was what he expected, and he knew it was what he needed to write a winning book. What he didn’t expect was the unwavering patience Scribe had with him. Every time he felt his hectic schedule and high standards were making him a bit difficult to work with, Scribe would calmly and confidently help him focus and keep the project moving forward.

As the book started coming together, Michael especially appreciated Scribe’s approach of writing the book with him and not for him. This meant everything was in his own voice. There would be no mistaking who was talking, and it would be a book that he could wholly own.

With his book, Michael no longer has to sell. 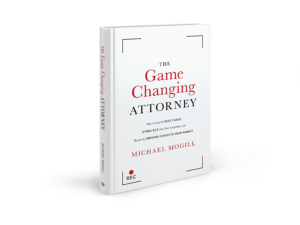 After publishing The Game Changing Attorney, the results were instantaneous and impactful. One attorney read Michael’s book on a flight and called him the next day. Within 30 minutes, he became a six-figure client for Crisp.

While not every deal closes that quickly, the book does give Michael a huge advantage when he gets on calls with potential clients:

“I would do calls with clients while I was writing the book. It was almost unfair. I knew that topic so much better, having researched it and written about it. Writing this book elevated my game completely. I was like Neo from the Matrix.”

With The Game Changing Attorney, Michael was done selling. His book was his business card, his sales pitch, and his closing argument. It opens doors and closes sales.

Now, Michael won’t have a conversation with a prospect until they’ve read the book. This has made his business more efficient because the client can see for themselves why they should work with Michael. The only thing Michael has to do is decide which clients to take on.

This approach has been insanely successful. Michael estimates that in the two years since his book was published, he’s earned at least $5 million from people who’ve read his book.

His personal brand has reached another level, as well. Michael has become the go-to expert for legal marketing, which has helped him land bigger speaking engagements. Shortly after his book was published, he was invited to speak in Prague at a legal technology conference after the organizer read it and loved it. He further parlayed the book’s success into The Game Changing Attorney Podcast, which has become the top podcast on legal marketing.

Michael’s impact has expanded thanks to his book. 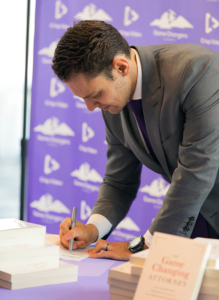 The book has completely altered the trajectory of Michael’s life and business. Though, not only his business and his life. For all the thought he gave to his book, Michael didn’t quite grasp how important The Game Changing Attorney would be for attorneys. After all, any attorney can and should be doing the things he outlined. Still, he has received thousands of responses from people, each one a sincere “thank-you” packaged in a heartfelt story.

One note read: “I was about to quit after twenty years because the phone was ringing less and less. Your book has re-energized me and given me a fighting chance.”

What excites Michael is how every discipline in the legal industry has been able to use his book. Regardless of the area of practice, his book is the definitive guide for attorneys. It allows them to stand out from the crowd, land the best cases, and become the top choice in their market.

Michael has always been a man on a mission. Now, his dedication to helping great attorneys have great businesses continues to expand beyond expectations. He’s created hope for the future of the lawyers, their families, and the communities they serve.

“The best attorneys can now be the best marketers. That’s good for everyone.”

Here are just a few of the things readers have said about Michael’s book: