How a Book Helped Mike Brunel Create a Second Career 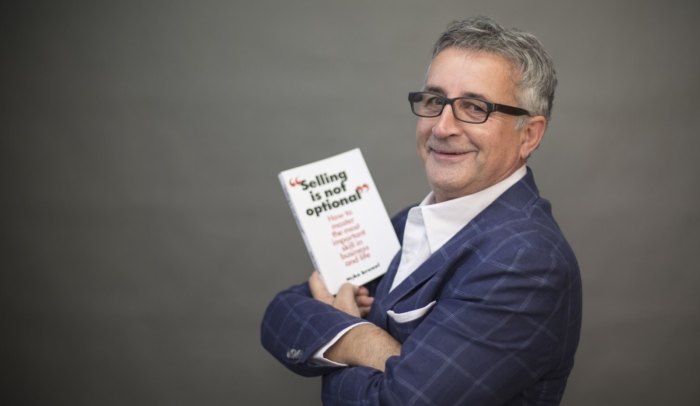 Mike Brunel knows the truth: we’re all in sales, whether we realize it or not.

The problem? Most people, including many small business owners, hate the idea of selling.

Sales either makes them uncomfortable, or because they’re not consistently closing deals they avoid selling altogether to avoid feeling like they are failing.

Of course, as a business owner, selling is not optional. Nothing happens in business until a sale is made.

When business owners come to Mike needing help with sales, he teaches them a process that focuses on authenticity and solving the customer’s problem.

“When a salesperson rams their solution down the client’s throat, the client is looking at them going, ‘You’re actually not solving my problem, you’re solving your problem.”

Writing allowed Mike to move forward after a devastating setback.

Mike learned how to sell during the twenty years he spent flying across the world from his home in New Zealand, staying in Motel 6s, and stacking sales to build his business.

When that business grew to include two hundred staff, six offices, and $350 million in annual sales, Mike did what he does best: he sold the business.

Mike found it difficult to transition from owning and running his business, especially when the new owners decided to take the company in a new direction.

Mike turned to writing to deal with the emotions he was feeling. Writing also gave him something to do while he waited out the three-year non-compete clause he’d signed.

As he wrote, he envisioned a book that could launch his second career as a sales consultant.

“Writing allowed me to move on and gave me a chance to build something new.”

The longer Mike wrote, the more he realized he needed help.

Mike poured his passion and experience into his manuscript. The further he got into the writing process, however, the more he realized he was swimming outside his depth.

He’d left school at a young age, so his grammar and punctuation weren’t the best. His sentence structure also needed work, as he tended to switch verb tenses on the fly.

These small issues added up to a larger worry that Mike’s book wouldn’t look professional. He wanted not only a polished manuscript, but also a publisher’s imprint on the cover.

“I figured when I gave somebody the book and they saw it was done by a publishing company, it would lend me and the book an extra layer of credibility.”

When he finished his manuscript, Mike searched for a partner, and eventually found Scribe. Mike sent what he’d written, and after the draft was evaluated, Scribe offered to help Mike rework his manuscript and publish his book.

“That was the turning point for me. With this process, I was confident we could take what I’d written and turn it into a book that I would be proud to hand to potential clients.”

Mike decided to move forward, but one concern lingered: as he worked with the Scribe team to improve his manuscript, would the book they created still sound like him?

For a book all about being your authentic self, capturing Mike’s voice was essential.

Mike worked with a scribe who perfectly captured his voice.

After some initial bumps in the road, Mike landed with a publishing manager who totally owned his project and assigned him a scribe—Sheila Trask—who understood Mike and his book.

The moment he saw Sheila’s writing, Mike’s worries about capturing his voice faded away.

“When I read what she sent me I thought, ‘That’s exactly what I would say if I was writing the book.’ Later, when people read it, they’d tell me, ‘Mike, this sounds just like you and it’s so easy to read.’ Hearing that fills me with an enormous sense of pride.”

When Selling is Not Optional was published in September 2016, Mike held a launch party at a café in New Zealand. Over 150 of his friends and family attended, including two friends who were in real estate. Intrigued by Mike’s approach to selling, they each bought fifty copies.

Shortly thereafter, those realtors invited Mike to share his ideas in a series of talks.

Freed from his non-compete clause, Mike jumped at the opportunity. He slowly began to build a new client base of small business owners who needed help selling, and unlike his previous business, Mike got to pick and choose the people who would receive his help.

“I’m not saying, ‘Here’s my book, read it and I’ll make an appointment to try to close you.’ Those days are over. If someone wants to work with me after reading my book, they come to me and I ask them questions to see if we’re a good fit for each other.”

The speaking gigs keep coming. Recently, Mike was asked to talk to the team at Greater Wellington Council by their operations director. The community was upset with the council after they launched a new bus timetable in the middle of winter and changed routes without properly communicating the changes.

“I shared my story and explained how failure was an opportunity to learn. I encouraged the council to go out and embrace the community by keeping them informed and slowly bringing back that confidence their customers had lost.”

When Mike works with clients, he’s not aiming for incremental improvement. He’s looking to unlock the full extent of their selling superpowers and create a tidal wave of impact.

When he audited the sales of one company that sold meat to supermarkets, Mike found that 95 percent of their revenue came from ten of their 150 clients. He implemented a strategy to follow up with those ten clients, figure out their needs, and then exceed their expectations.

Within six months of working together, that company’s sales increased by 20 percent.

When he was invited to lead a workshop in Hawke’s Bay for entrepreneurially minded students, Mike used the lessons from his book to impact the next generation of salespeople.

As part of that event, Mike challenged the students to go out on the street and talk to a minimum of five people about what makes a good salesperson, then return within twenty minutes.

Some returned five minutes later, their task complete. Others took the full twenty minutes and talked to ten or more people. In doing so, these students made Mike’s point for him.

“When it comes to selling, you can’t just do the minimum. A great salesperson is honest, straightforward, and genuine. But if you want to be good at running a sales team or running a business, you’ve got to be willing to go the extra mile.”