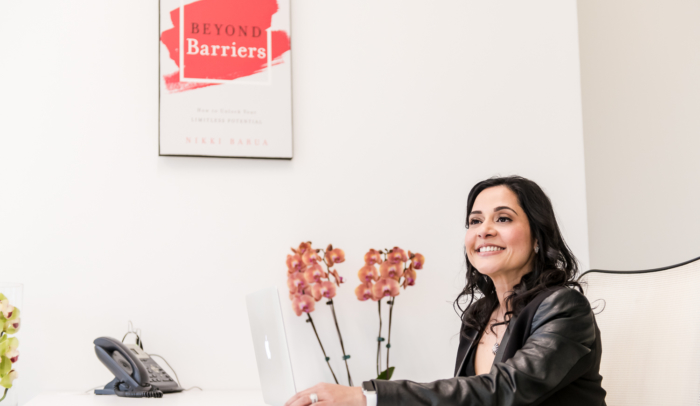 For twenty years, Nikki Barua has helped some of the world’s greatest brands innovate their products and platforms for better performance. During that time, Nikki established herself as a leader in the digital transformation space, grew her business, and became a top female entrepreneur. She landed on prestigious lists like the ACE Entrepreneur of the Year, LA Women of Influence, EY Winning Women, and has been featured in Fortune and Forbes.

With that kind of reputation—coupled with three Master’s degrees and fluency in five languages—there was no doubt Nikki had reached the mountaintop in her career.

But once she reached that coveted vantage point, Nikki couldn’t help but notice a disturbing trend: there weren’t nearly as many women in her position as there should be.

Nikki knew that if she could get to this level, anyone could—especially since she hadn’t achieved her success thanks to her family name or wealthy connections.

“I don’t have an Ivy League degree. I don’t come from money. I’m an immigrant who came to this country twenty years ago with limited resources. There’s nothing extraordinary about my circumstances or my profile. My success is the result of adopting the right strategies and winning habits.”

Nikki had faced every kind of obstacle, challenge, and setback imaginable—and yet she’d endured and conquered each and every one. How? By using a certain set of principles and tackling problems head-on, rather than avoiding them or accepting them.

Nikki saw an opportunity to share her principles of success. 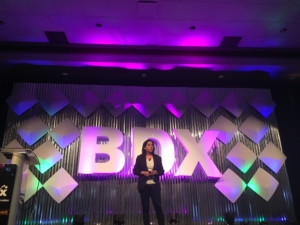 Nikki enjoyed her work, but the more she thought about addressing the issue of too few women in leadership roles, the more she realized that was her true calling. She couldn’t stop thinking about it. She knew she had to do something to close the gender gap and help more women achieve their dreams.

“With my platform, I kept asking myself: How can I change what I see? How can I get more women to the table? How can I share what worked? So, that’s what I started to think about and started to share in my speeches.”

While she couldn’t change the circumstances of the women around her, she could share with them the principles that had empowered her to keep climbing despite the resistance she encountered. That was the missing variable that could change the equation for them.

The feedback loop from Nikki’s speaking requests told her she was on the right path: more and more people wanted to hear from her and see her speak. And it was because she was in a tiny group of people who had accomplished something that most others had not.

Nikki didn’t know how to start the process of writing a book.

When Nikki sat down to codify her principles, she started by writing a blog. What she soon realized was that aiming higher—and writing a book—could scale her ideas and reach.

With the goal in mind of taking her ideas to the next level, Nikki started brainstorming what a book might include. Right away, she encountered obstacles she hadn’t anticipated.

Who was her audience? Was there a market for her book? Did she actually have enough material for a full book, or was she better off just sticking with writing a blog?

“I had no idea how a book actually got developed. It’s one thing to say, oh, I want to write a book, but it’s a process—and not just the writing process or the development of the book, but everything. From what goes inside to the outside of the cover, to the marketing, to how it lands in bookstores or on Amazon.”

The complexities of the book creation process posed a particular challenge for Nikki. Unlike previously in her career, she didn’t see a clear path forward. Thankfully, she didn’t stop there.

Nikki went from stuck in neutral to full steam ahead with Scribe. 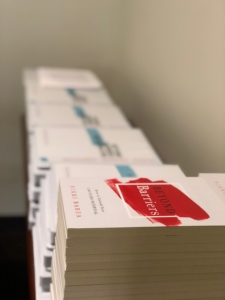 Instead of giving up, Nikki adjusted her aim. Rather than navigating the process herself, she decided to find a partner with the expertise and resources needed to transform her idea into a finished book.

She met with several publishers, but there was never any chemistry. Nikki also found that traditional publishing involved a complicated contractual process that wasn’t author-friendly.

Things changed once Nikki discovered Scribe through an author story she read online. After her first meeting with Scribe’s team, she felt an instant lift in her hopes for the book. She felt she went from dreaming to doing.

“The big gray cloud that I felt like was becoming an impediment to me getting a book out disappeared. Scribe got me going, because otherwise a book would have remained on my vision board and I would’ve kept going in circles trying to make it happen.”

But even with renewed hope, questions remained as Nikki started work on her book. What was the best way to serve her audience, and could she really translate her principles to the page?

Scribe helped Nikki get clear on how best to serve her audience.

Nikki had already done much of the work transforming her ideas into words. The only problem was that her material was scattered across several blog posts. In order to elevate the content, she needed Scribe’s help to bring disparate pieces together into a cohesive whole.

“That process was one of the hardest things because there were lots of interesting pieces that I pulled from blogs that I’d written. There were some compelling messages, but what was missing was having an effective way for the audience to consume my ideas and recommendations. That was a lot harder than I realized.”

What helped tremendously was working through the North Star document, which helped Nikki clarify her audience and goals for the book. Then, throughout the content calls, her scribe helped her decide what tools would be most useful to share with her audience.

Even better, Scribe made it possible for Nikki to do her work on the book while running a global company and speaking on stages all over the world. Her Scribe team remained flexible to account for her busy schedule and gave her deadlines to keep the book on track.

“The phenomenally supportive team from Scribe helped me get there with accountability and deadlines. Had I not collaborated with Scribe, it would have taken a lot longer or even potentially never come to fruition. It would have been easy to just put this aside and say, well, I can’t afford to focus on this right now. But with Scribe by my side, I never did that.”

Since publishing her book, Nikki’s impact and influence have grown exponentially.

When Nikki launched Beyond Barriers in 2018, her visibility skyrocketed. Her speaking career, which was already doing well, also reaped the rewards of a book—Nikki saw a 5x increase in speaking requests and a 10x increase in her speaking fees. The brand visibility and name recognition of the book also led to a 2,500% increase in inbound leads every month.

The book helped Nikki clarify her mission and codify her success principles. But it also helped her see firsthand the impact on women worldwide. There was a need to do even more—not just write a motivational book, but create a tangible solution that helps women go beyond barriers.

“As the book has revealed my own future path professionally, I’ve found myself much more excited to be doing what I’m doing. The book has also shifted how I looked at myself from defining myself as an entrepreneur, to realizing that I am an influential leader and change maker. That was a huge shift that was unexpected.”

So in 2020, Nikki launched a new business called Beyond Barriers with a mission to accelerate women in leadership. Beyond Barriers accomplishes this by empowering women with leadership coaching, personal transformation, and community engagement—all of which are available through a globally accessible platform. What began as a quest for writing a book has become a mission and a movement to empower 1 million women worldwide.

Nikki’s book makes an impact on her readers’ lives. 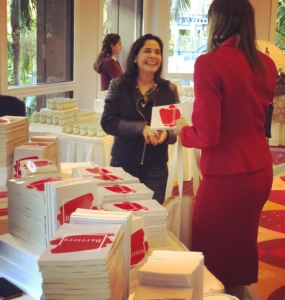 Nikki says that sharing her personal stories through her book has resulted in a new level of intimacy and connection with her audience. They feel like they know her, and they tell her how she’s changed their lives—sometimes in ways Nikki can scarcely believe.

“Someone wrote to me that they had been depressed and suicidal, and they’d been given my book. They read it, and they chose life. This has stuck with me that she chose life because reading my book taught her that every obstacle is an opportunity for something bigger. It just really brought it home for me how powerful our words are. Stories can change lives, and that is an immense privilege and responsibility.”

Since the publication of her book and seeing the impact it has made, Nikki is continuing to fulfill her mission to help develop the next generation of women leaders through her platform with leadership development.

Take a look at the kind of feedback and reviews Nikki has received: