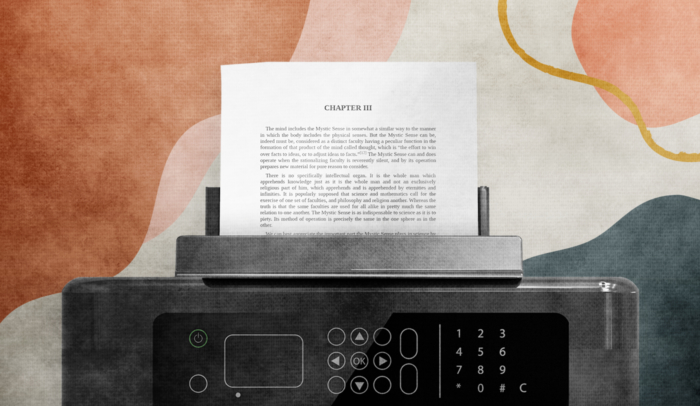 There are many options when it comes to printing your book. But before I give you a list of the best services to use, let me preface it by answering the key question about book printing:

For the majority of self-publishing nonfiction Authors, getting your book printed is a great choice, but getting it printed for a bookstore isn’t worth the effort.

They are different things, and I will explain the difference now because it’s key to understanding book printing options.

From the bookstore’s perspective, there are many reasons not to stock self-published books (I’ll say more on that in a minute).

From most nonfiction Authors’ perspectives, brick-and-mortar bookstores aren’t an ideal place to sell books either.

Your target audience—and the one that will make you money—is narrower than fiction book audiences. You’re much more likely to reach new readers through word of mouth.

But that doesn’t mean you shouldn’t print your nonfiction book.

Despite the popularity of eBooks, most book sales are still physical books.

When eBooks first appeared, people speculated that they would replace print books entirely.

That said, Authors shouldn’t waste their energy trying to get their book into bookstores. But they should still print physical copies of their book.

While it’s more expensive to design a print book than an eBook, having a print book will set you apart from the competition.

Not to mention, physical copies of your book are excellent marketing tools. Giving copies to potential clients will establish you as an authority in your field and will attract new business. And quite frankly, it looks better to readers when they go to Amazon and find an ebook and a print book to buy.

That leads to a big question: how will you print your book?

In this article, I’ll talk more about your basic printing options and give you recommendations for the best book printing services.

Print on Demand vs. Offset Printing

If you want to print physical copies of your book, you have 2 main options:

Print-on-demand is exactly what it sounds like. Books aren’t printed in large print runs. Instead, they’re only printed when someone places an order.

With offset printing, the printer prints a large number of books. The Author must oversee storage and order fulfillment (or find a third party who can do it).

When choosing between these 2 options, consider the print quality you want. For paperbacks, there isn’t much difference, as long as you go with a solid PoD printer.

But if you want hardcovers, there’s no PoD printer that offers fancy flourishes like embossing, spot gloss UV, or color photo inserts. If you want high-quality features, you’ll have to use offset printing.

Price is the last major difference between PoD and offset printing. With PoD, the price per copy is static. If the PoD cost is $4 per book, that will stay the same, regardless of whether your book sells a single copy or becomes a bestseller.

If you are really confident in your audience and know you can sell thousands of books, bulk pricing could be a good option.

But here’s the catch: you have to be very clear and realistic about your readership. You don’t want to order 10,000 books and end up with 9,000 sitting in your basement.

With offset printing, you’ll also have to adjust your distribution strategy and apply for an Amazon Advantage account. Read our post on paperback distribution to learn more.

TL;DR: For most Authors, PoD makes more sense. You don’t have to manage orders, deal with book storage, or guess how many books you’ll sell. Plus, the paperback quality is comparable.

You might still be wondering, If I have physical copies, why shouldn’t I try to get them into bookstores?

When a bookstore places an order, that doesn’t mean your book has sold. It just means they’re going to put it on the shelves. In order for the book to count as a “sale,” a reader has to purchase it.

If no one buys the books, the bookseller returns them to the publisher.

All the “big box” bookstores like Barnes & Noble refuse to carry non-returnable books. Most independent bookstores have the same policy. It mitigates their risk of taking on books from new authors.

On the publishing side, traditional publishers are willing to take the chance that their books will be returned because they want the coveted shelf space.

So, why not just mark your PoD books “returnable” and take the same chance?

Just because your book is returnable doesn’t mean a bookstore will carry it.

They only stock books they know people will want to buy, which means they rarely stock self-published titles.

For them, it’s much safer to stock books from traditional publishers, because, in theory, the publisher wouldn’t have taken the book on if there was no market for it.

That’s why, for most nonfiction Authors, it’s best to leave brick-and-mortar bookstores alone. They might seem like a logical place to sell books, but they aren’t the best place to spend your time and effort.

The landscape of book publishing is rapidly changing. There are much more effective ways for Authors to leverage their books to make money.

A book is a valuable tool for many lucrative opportunities, such as:

Having your book in a bookstore won’t help you accomplish any of that.

But remember, even if brick-and-mortar bookstores won’t stock it, you should still have a printed version of your book. 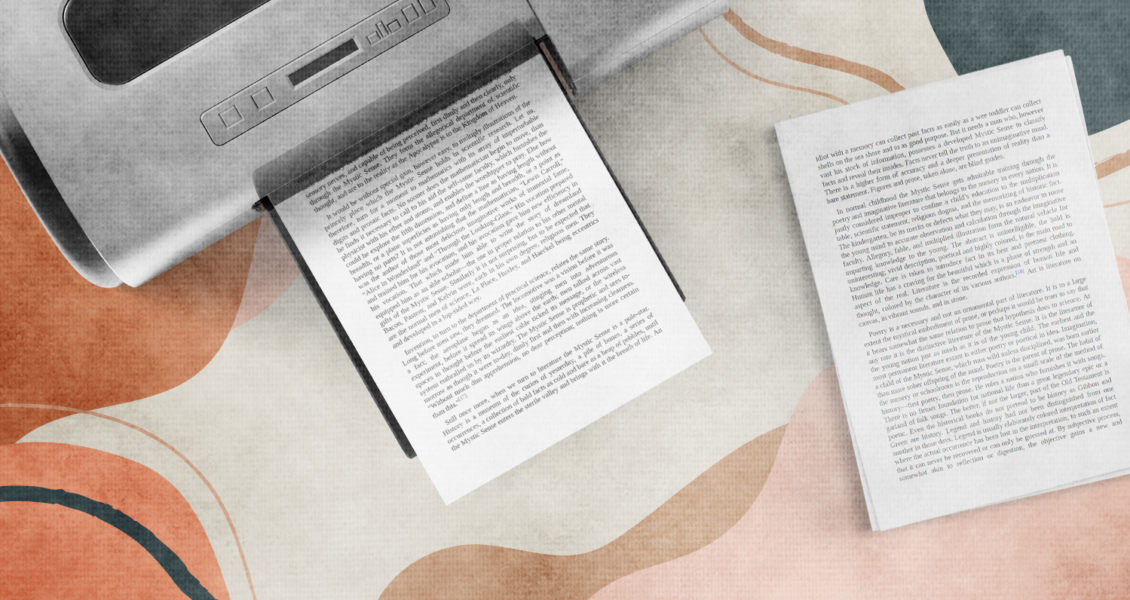 A print book will help you stand out from the crowd. You can still sell it online, and you’ll have something tangible to give the readers who want it.

People need books more than ever, and they’re reading eBooks in droves. As an Author, you can send eBooks electronically for free, so they’re a great way to capture your audience. But people still like physical books, and PoD won’t hurt your pocketbook because the books aren’t printed until they’re sold.

Some people are devoted to print books, while others prefer eBooks. But there’s a whole other group of readers you might want to consider, too: audiobook devotees.

This post on audiobooks will walk you through the process of creating an audio version of your book that’s high-quality enough to sell on Audible and iTunes.

If you want to publish your book in print form, here are the best book printing services for self-published Authors. We’ve listed 2 on-demand services and 1 offset option.

IngramSpark is the self-publishing platform of Ingram Content Group, the largest book distributor in the U.S.

They have a wide range of printing options, including hardcover and color printing. Generally, their print-on-demand books have a high print quality. IngramSpark’s print turnaround and shipping are also quick and reliable.

When you publish with IngramSpark, you also get global book distribution at over 40,000 retailers. This includes Amazon, Barnes & Noble, and indie bookstores. Even if your printed book isn’t in the brick-and-mortar store, many major retailers will still stock your book online.

Unfortunately, their interface isn’t the most user-friendly. When you toggle your preferences, it can be glitchy. And when you upload your manuscript files, IngramSpark will flag errors, but they don’t offer any support or suggestions for fixing them.

Also, IngramSpark charges a fee to upload with their service ($49 for PoD). If you ever need to upload a revised file, it will cost $25. They do offer discounts for new titles and title changes.

Bookstores receive a wholesale discount on books, which you can set in IngramSpark. If you set the discount to the minimum, stores will list your books online–but there’s a catch. Sometimes, retailers have suspicious “out of stock” issues when the discount is too low.

To ensure your book gets the best distribution possible, it’s safest to offer the standard 55% discount. This is obviously a trade-off depending on how much you care about royalties.

(You may have been familiar with CreateSpace, which previously offered Amazon-only PoD. In 2018, CreateSpace and KDP Print merged.)

Unlike IngramSpark, there are no upfront costs with KDP Print. They offer free publishing tools to help with book formatting, an online previewer, and a free ISBN.

The interface is simple to use, and it’s convenient to have KDP Print and KDP’s other features all in one place. As with most Amazon services, the shipping is quick and reliable, and the print quality is solid.

When you use KDP Print, your book is available on Amazon websites in the U.S., Europe, and Japan. Given that Amazon is still the top book retailer (accounting for roughly half of U.S. print book sales and over 80% of eBook sales), that’s valuable placement.

If you expect Amazon to be your major retail outlet, KDP Print is a good option. But overall, their distribution isn’t as wide or diverse as IngramSpark’s.

KDP Print does offer “expanded distribution” to local bookstores in the U.S., but these channels aren’t very useful. That’s because Authors can’t change their discount rate or set books to “returnable.”

At Scribe, we actually use both services, so our books have maximum reach.

If you upload your book to both IngramSpark and KDP, don’t list Amazon as a retailer during your IngramSpark process. If you do, you’ll end up with 2 Amazon listings, and they’ll both get pulled down.

Here’s one other thing to consider: when you use KDP Print, you’re tied into Amazon’s royalty, distribution, and publishing policies. Many Authors find those policies favorable, but there’s much less flexibility for Authors looking to set their own terms.

Because most self-publishing Authors are better served by print-on-demand services, Bookmasters is the only offset book printer we’re recommending.

Bookmasters is the manufacturing/printing arm of Baker & Taylor Publisher Services. They’ve been operating for more than 45 years, which means they’re a printing company with a lot of experience.

They make quality books at reasonable prices, and Authors have a lot of flexibility with options like trim size and cover finish.

Most Authors don’t need a hardcover, but if you want special copies, know you’re going to sell thousands of books, or believe a very high-quality print will be a better fit for your brand, Bookmasters is your best option.

(Remember, IngramSpark also offers hardcover options if you don’t want to place a bulk order. They just won’t have as many “fancy” options, like embossing.)

You will have to buy in large quantities, though, and you will be responsible for distribution. Baker & Taylor also offers warehousing and fulfillment, but that’s an additional cost to consider.

Cons: The cons come down to whether offset is your best choice in the first place. Do you want to buy in bulk? Is it cost-effective and worth the headache for you to handle your own storage and distribution?