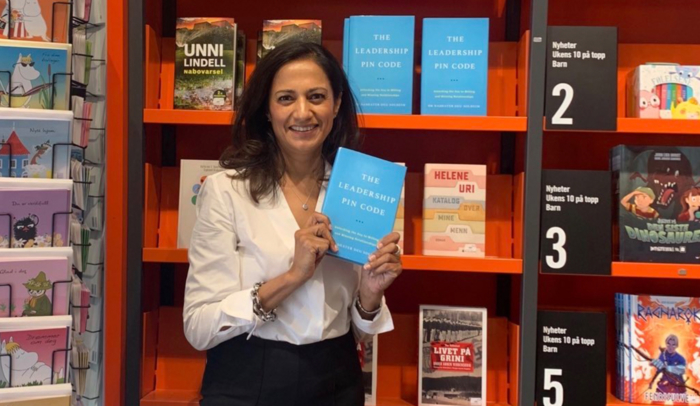 By all accounts, Dr. Nashater Deu Solheim is accomplished.

She’s a former forensic psychologist who studied the minds of psychopaths. At Harvard Law School, she fine-tuned her negotiation skills. Her career has included executive leadership roles in international private companies and government ministries.

And yet, as Nashater tried to distill the essence of her work, she hit a brick wall.

“I struggled to crystallize what it is that I stand for. What do I want to put out into the world? What’s my message, my offering, and my purpose?”

The move that finally brought her clarity was writing a book. The Leadership PIN Code not only gave substance and credibility to what Nashater had to offer the world, but it also helped her move to the next phase of her career: reaching a wider audience of potential clients.

Nashater needed a partner with expertise in book marketing. 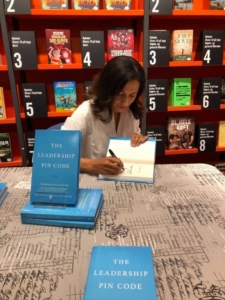 With the book in hand, it was time to market its ideas and attract readers from across the globe. There was only one problem: Nashater had no idea how to market a book. She had marketed herself, her services, and her website, but she knew a book was entirely different.

Nashater began to search for partners who could help her market the book, but the more she explored, the more she saw the same issues popping up that gave her pause.

“The marketers I use for my normal business purposes had very little experience marketing books. What reach they did have was local and national, and I wanted to use my limited marketing budget to reach a wider, international audience.”

To optimize and maximize her investment, she needed a competent and professional marketing service with the type of international reach necessary to achieve her goals for the book.

One of the marketing partners Nashater considered was Scribe, with whom she’d worked to write and publish the book. Even with that history, she wanted to do her due diligence rather than assuming Scribe would be the right choice to address her marketing needs.

Her search ended with a clear conclusion: Scribe’s Book Launch package was the best choice.

“I felt like you needed to know the book to market it. Scribe didn’t just know the book—they knew me. I saw that with how the book was such a personal reflection of me. Having been with me on this journey, they knew how I wanted to market the book.”

Just as important as familiarity was the transparent value proposition. Nashater wanted to know what she would get from Scribe, and from the very first agreement, the return on her investment was spelled out in plain English, not incomprehensible legal jargon. She saw the deliverables she would receive and knew she could stop or extend the agreement at any point.

“I knew what I was getting. It was well described, planned out, and followed up. I had confidence in the milestones of the marketing as it went along. It never felt like it was going to run out of control, or I was going to find myself with surprises, or I would get in over my head, or I wouldn’t understand where the investment was going.”

Before the book was even released, results started rolling in.

The Leadership PIN Code was set to be published on March 3, 2020. Scribe’s goal was to generate a wave of momentum and buzz heading into that launch date through reviews, podcast appearances, and article placements with high-profile publications.

Nashater had high hopes, but she admits she wasn’t prepared for what happened next.

On February 4, Kirkus reviewed the book, saying, “In this solid debut, Solheim distinguishes up front between ‘entitled’ and ‘engaged’ leaders. This simple yet meaningful distinction underlies a guide that delivers useful counsel on how to become a more engaged leader.”

Nine days later, the Scribe team made one of Nashater’s dream goals for the book launch a reality: Harvard Business Review reached out to interview her on its podcast, Dear HBR.

“To have that kind of endorsement that your ideas and advice are credible from an organization that you hold in such esteem, I’ll never forget that. It blew my mind.”

If there was one other publication whose radar Nashater hoped to land on, it was Forbes. As Scribe continued working in the background to make that happen, Nashater prepared for launch day. When the big day arrived, her book quickly achieved Amazon bestseller status. Still basking in the glow of that achievement, she received a second mind-blowing email a little over a week after the launch: The Leadership PIN Code had been recommended by Forbes.

“I’ll never forget the headline. It’s seared into my brain: ‘8 Books That Will Make You Reconsider How You Manage Relationships.’ It’s one of the greatest achievements of publishing a book with Scribe. That and the HBR podcast. I would never have achieved those results publishing a book myself or publishing it with anybody else.”

Within six months, Nashater landed on a TEDx stage. 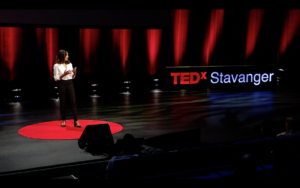 One of the goals Nashater discussed with her Scribe marketing team was landing speaking engagements. Prior to the book, Nashater had been on plenty of stages, but it was usually to facilitate workshops or teach content. She’d never done anything like TEDx before—until the TED organizing committee in her hometown of Stavanger, Norway, came calling.

The committee wanted Nashater to present, not something from her book, but rather something inspirational. She knew from the outset she would do the talk “naked,” as she described it, meaning no PowerPoints or notecards. Just herself and the microphone.

Once again, the challenge became distilling her story down into a short, inspiring presentation. But the journey she’d been on since writing the book had prepared her for this challenge.

“Through this process of writing the book, launching it, and reflecting and talking about it, the essence of my TED Talk became very clear. It was my story of being a psychologist, working with psychopaths, and having to take care of myself. Being authentic but not being naked and vulnerable in every aspect because that could have put me at risk.”

Like every author, Nashater worried about how her book would be received once readers got their hands on it. She feared being called incompentent and receiving negative reviews.

But as she walked out onto the iconic TEDx stage, something amazing happened.

“I remember going into my talk and thinking, I no longer care actually. It’s not that I don’t care in the sense that I don’t give a damn. I give a damn, but I no longer worry about whether people think what I’m saying is credible or if they agree with it because it’s just my view. It can’t be wrong. That was a turning point for my relationship with the book.” 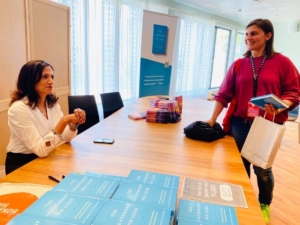 The exposure Nashater has gained from the book and the attention surrounding it has raised her profile faster than working with clients ever did. As a result, there’s been a noticeable change in the inbound requests she’s getting: they’re higher quality engagements.

The COVID-19 pandemic canceled many of the gigs Nashater had booked for 2020, but she’s confident that once the world begins to resemble its former self, new clients will come.

In the meantime, she’s enjoying two things worth just as much as new business.

After her TED Talk, standing backstage with her adrenaline pumping, Nashater had the hope that she reached just one person with the words she said. So that’s why the message she received on LinkedIn from a woman she’d never met meant so much to her.

“She told me my talk had moved her to tears. This woman had left her job because she felt so disconnected to the people she was working with and the culture of the organization. She found herself unemployed and quite depressed because she thought there was something wrong with her. Listening to my talk, she realized it wasn’t her—it was the leader and the team she was part of. The feelings she’d carried for months now that have made her feel so bad slipped away and she finally felt relief.”

Messages like these prove that Nashater’s ideas are making an impact on readers. The process of sharing those ideas with the world has left an impact on her, too. Originally she planned to pack her days with client coaching sessions. Now, Nashater has a new goal in mind.

“I want to change the way the world thinks about leadership. This experience has shown me that I’m passionate about getting the message out as wide and as far as possible so that it meets the right people—those who will take it and do something with it.”