On average, people spend over 13 years of their life working (and that number goes up if you include unpaid overtime). Even if you’re satisfied with your job, that’s a lot of time. And, if you hate your work, or find it unfulfilling, it can feel like an eternity.

That’s why it’s so important to love what you do—a fact that Kris Holmes knows all too well. As an executive recruiter, Kris has seen it all: people struggling to find a job that adds value to their lives in a meaningful way. People who are desperate to find meaning and purpose in their work And, of course, people who want to make money and have fun doing it.

Over the last 28 years, Kris has worked with hundreds of people, and she’s seen what happens when they choose the wrong job or take the wrong career path. She’s witnessed the consequences—the stress, frustration, and heartache—that come when people take jobs that don’t feed their souls.

But Kris has also helped many of those people fix their mistakes. Because she gets to know people early on in their career, she becomes a trusted resource and mentor; she is someone who is always willing to compassionately help people focus on figuring the right move (short- and long-term).

“I love helping people build their careers—helping them get out of the weeds to the 30,000-foot view.”

By getting her clients to take a step back, disengage from their ego, and really consider what they want, Kris helps people find their perfect career, and as a result, she helps them actively improve their own lives. For her, nothing could be more important or more rewarding.

Kris knew there was a huge need for a book that could act as a career bible. 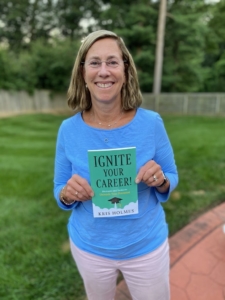 Several years ago, Kris got a chance to help a different population: college students. She was invited to speak at Washington University’s business school and decided to talk about resume writing and interview preparation. During her presentation, she was blown away at how hungry they were for the information she was sharing.

It was a top-tier business school, but the kids she spoke with were spellbound and deeply appreciative. And when her own children started going to college—and she went and spoke at their universities—she experienced the same thing: every student was eager to hear her advice.

“These were all schools with great career centers, but the kids were still so hungry for this information. It got my brain going, because there was definitely a need for this.”

Kris knew the schools she was speaking at were among the best in the nation. If students at the highest-rated schools needed this information so badly, how much more desperately did students at lower-tiered schools—schools that might not even have career centers—need it? Was anyone out there sharing this all-important information with them?

That’s when it hit her: she could share this knowledge with them. No, she couldn’t go and speak at every school in the nation, but she could write a book students could use as a career bible.

The more she thought about it, the more excited she got. With a book, she could help people she’d never otherwise be able to reach. But there was more: she’d been doing this work for more than 25 years, and she wanted to leave a legacy. A book was the perfect way to do that.

On top of all that, becoming a published author would elevate her credibility in the field. Realizing that it was a win-win—a win for her personally and professionally, and a win for all the people it could help—she made up her mind. She was going to write a book.

The obstacles facing Kris threatened to end her dream before she’d written a single word.

As excited as she was to get started, there was a major problem: she had no idea how to bring a book to life.

She just couldn’t see herself going into a room, isolating herself, and writing. Kris had made a living out of identifying strengths and weaknesses, and she was acutely aware that her strength was talking with people, not writing an entire manuscript.

The other obstacle she faced? Lack of time.

“I have a full-time job as an executive recruiter and partner at the O’Connell Group, and I wasn’t going to take time off work to write the book.”

The more she thought about them, the more overwhelming these obstacles seemed. She knew the book was important, but how was she going to find the time for it? How was she going to write an entire book, let alone cover everything she wanted to say in a way that was engaging and compelling?

Kris wasn’t willing to compromise on quality. This was her legacy. Done right, this book would change people’s lives. If she couldn’t figure out how to do it, she wasn’t going to write a single word. Period.

Kris knew she wasn’t equipped to write the book herself—and she certainly wasn’t interested in giving up control to a traditional publisher—so she turned to her personal coach (who was also a close friend) to see if he had any advice.

“He had several clients who had written books, and they had all used Scribe. He put me in contact with them, and I talked to them about the company. Every single person told me they had a great experience.”

After talking with several of Scribe’s former clients, Kris was confident she had found the perfect solution: Scribe’s Professional Package. Because she could talk her book out to a scribe, it would let her play to her strengths. Just as importantly, she would retain control over everything throughout the entire process.

Everything was unknown, but the people she had talked to raved about Scribe. Kris decided to take a leap of faith, and sign up. 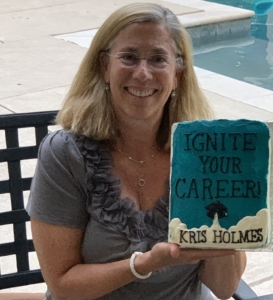 As soon as she started working with her scribe, Tim, Kris knew she had made the right decision.

“Tim was wonderful. He got my voice and my tone, and he made sure it was engaging and drew people in. He always made sure to do what worked for me.”

It wasn’t just Tim who exceeded her expectations, either. Maggie Rains, Kris’ publishing manager, was there anytime Kris had a problem. For example, Kris hit a little bump in the road with the book’s spine. She jumped on the phone with Maggie, who listened to her concerns and got everything straightened out in about 10 minutes.

Kris knew going in that the project would hit some snags. That was just reality. What was important to her was how her team handled any issues that arose. Every single time, they were responsive, professional, encouraging, and enthusiastic. She didn’t have to reach out often, but when she did, they always came through for her.

As Kris moved through writing, editing, and publishing, she was delighted with how flexible her team was. They worked around her busy schedule while keeping everything moving forward. Seven months after starting, with COVID in full swing, the book was ready to launch.

Kris had high expectations—and her book exceeded them in every way.

Kris knew all along the information she had included in Ignite Your Career! was exactly what college students around the country needed.

But the benefits the book brought didn’t end there. Along with increasing her credibility and reach among college students, it’s also given her a platform to share her knowledge and insight with people outside of her typical Marketing industry, ranging from college students to VP level clients with the launch of a new business.

After people read her book, when they found themselves struggling and needing more help, they went to her website and tapped into the expertise of Kris and her partners for everything from Resume Writing, Interview Prep and Negotiations to Complete Coaching.

Kris was thrilled to have the opportunity to help more people. Also, because she is able to send copies of the book to high-level executives whose kids are in college, she can build relationships with those executives and help their children. It’s the win-win Kris dreamed about when she first decided to write the book.

The book has also raised Kris’ profile immensely. She was on over 40 podcasts, including Working Media with Rafael Bracero, Ash Said It Daily, and Successful Nonprofits Podcast. She was also featured in CEOWORLD Magazine, Thrive Global, and Entrepreneur Magazine, among others.

Kris always believed the book would do well, but its success has exceeded her expectations in every way. Add on that it’s saved the O’Connell Group over $100,000 in placement fees since it launched (because it’s helped people get crystal clear on what they want to do) and it’s clear the book’s impact on her life can’t be overstated.

Kris’ book gives people a way to find and land their dream job.

As happy as these successes make her, Kris counts helping people as her greatest achievement. That’s why, when people contact her to tell her how much the book changed their lives—which happens frequently—she gets giddy.

“Someone contacted me to say they were about to pull the trigger on a job because of the money and the title, but my book made them stop and think. They realized it was the wrong path, and they thanked me for stopping them from screwing up.”

Knowing she helped someone avoid making a bad decision makes her day. And the people who return to her book again and again as they move through the entire job-seeking process? They really touch her heart, because she wrote the book to be a complete reference people could use and return to as they sought to discover and land the job of their dreams.

For Kris, all the feedback she gets warms her heart, because it proves that she accomplished what she set out to do: elevate her credibility and establish her legacy—but most of all, give people the tools they need to make sure all the time they spend working is time that they truly enjoy.

Here are a few more people whose lives have been impacted by Ignite Your Career!.