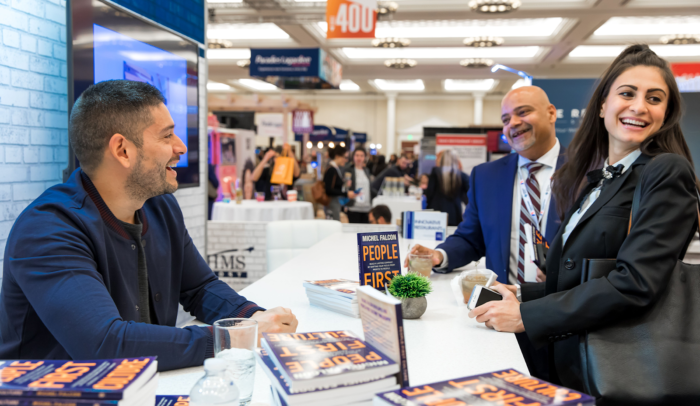 If one of Michel Falcon’s employees has a dream to open a competing business across the street from one of his restaurants, bars, or nightclubs, conventional wisdom says he should shut them down to avoid the competition. But Michel isn’t a conventional business owner.

He would work with that employee to turn their dream into a reality.

His businesses earns tens of millions annually and employs more than 150 people, but that’s not what excites Michel as he’s driving into work on a Monday morning.

He’s looking forward to “breakfast and jam,” a time he sets aside every week to meet with employees—from dishwashers to general managers—so he can learn their stories.

It’s part of Michel’s People-First Culture, and it’s the secret to his success.

“The economics of my business are very important, but building relationships with my employees, my customers, and the community matters more to me.”

The strategies Michel uses to build a People-First Culture have been honed over decades in the unforgiving hospitality industry. Michel has become adept at what drives many business owners crazy: hiring, onboarding, and designing unique customer experiences.

Michel knew his battle-tested strategies could help entrepreneurs regardless of their industry, so he began teaching them to a few of his peers. To his delight, their businesses improved.

Those peers encouraged Michel to share his knowledge with a wider audience.

In Michel’s mind, that meant writing a book. It would allow him to build his personal brand outside of his businesses and reach an audience beyond his direct network.

“There aren’t a lot of resources that show entrepreneurs how to build winning cultures. I wanted to write a step-by-step guide that also inspired the reader to take action.”

Early attempts at writing the book were derailed by bad advice.

Wanting to write the book himself, Michel sought advice on how to best craft his manuscript.

One author told him to take his top dozen blog posts, expand each one, and mash them into a book. Michel tried that approach, but the result was a disjointed mess.

The next piece of advice he got was to replicate the book of an author he admired.

With Simon Sinek’s Start with Why in mind, Michel began writing, but it was impossible to gain momentum. He’d write a chapter or two, then walk away from the project for months.

With each chapter, Michel felt his dream of writing a book getting further away.

With Scribe’s help, Michel was confident he could finish the book.

For the next two years, Michel looked for an expert that could help him write his book. Only this time, he stayed away from asking those who’d given him bad advice years earlier.

This time, he sought recommendations from his peers. People Michel respected—including Scribe author Cameron Herold—suggested that he hire Scribe immediately.

Michel researched Scribe to see if they could offer him the peace of mind that his book-writing journey had lacked. The more he learned about their process, the more confident he felt.

“I did not expect Scribe to do all the work for me. I needed guidance and leadership from them so I could focus on what I needed to do to bring the book to life. I knew my part—I just needed help from true experts.”

As much as he liked Scribe’s process, Michel worried he didn’t have time to write the book. He had 150 employees, thousands of customers, and keynote presentations to prepare.

He also carried the scars from his aborted attempts to write the book himself and worried this attempt would end the same way those had. Nevertheless, Michel took the plunge.

Despite being someone who rarely answers his phone, Michel looked forward to the content calls with his scribe, John, because of the instant connection they formed.

Not only that, Michel got to see the fruits of their labor right away. After their calls were finished, John sent Michel submissions that perfectly captured his words in his voice.

After six years writing thousands of words and getting nowhere, it was a sweet victory.

Scribe also worked around Michel’s schedule so he could run his businesses and write a book. The entire time, Michel kept waiting for the other shoe to drop, but it never did.

“I was critiquing the process the entire way, but none of my fears were validated. I’m a customer service expert, but it was hard for me to find things wrong with how they operated.” 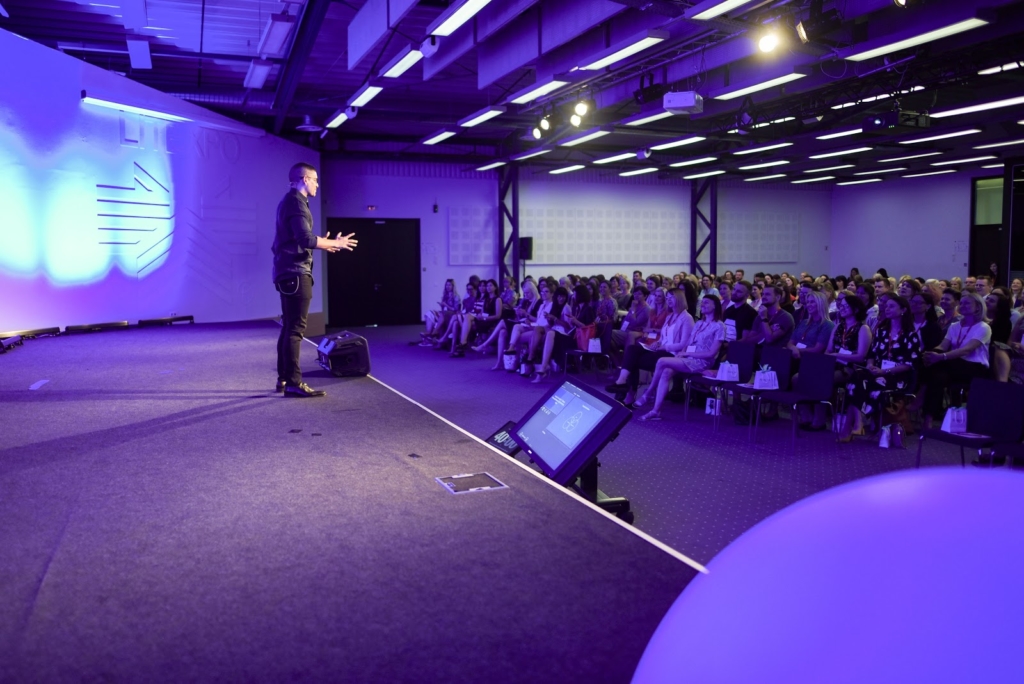 People-First Culture has become an invaluable tool in Michel’s arsenal since it launched in October 2018. It’s improved his thought leadership, landing him in Forbes and on CNBC.

Opportunities to speak are coming at a faster clip, like the $15,000 gig with Planned Companies after one of their executives typed “company culture” into Amazon and found Michel’s book.

Michel will give one his biggest talks yet this month as the keynote speaker at the national convention for sandwich giant Subway. While executives knew of Michel before he was an author, the book helped him close the deal, which includes a book signing of 400 books.

The book also serves as a lead magnet and source material for a $3,000 online course Michel created to fill the content void between his $15 book and $15,000 keynotes.

All told, Michel estimates the book has generated $250,000 for him since its release.

“When the opportunity came to write the book, it was an expense I hadn’t budgeted for, but I had the liquidity to make it happen. I knew it would be ROI positive if I was willing to be patient, and I was right. It’s been a 5x return on my investment, and it hasn’t even been a year yet.”

Organizations are being transformed by Michel’s strategies. 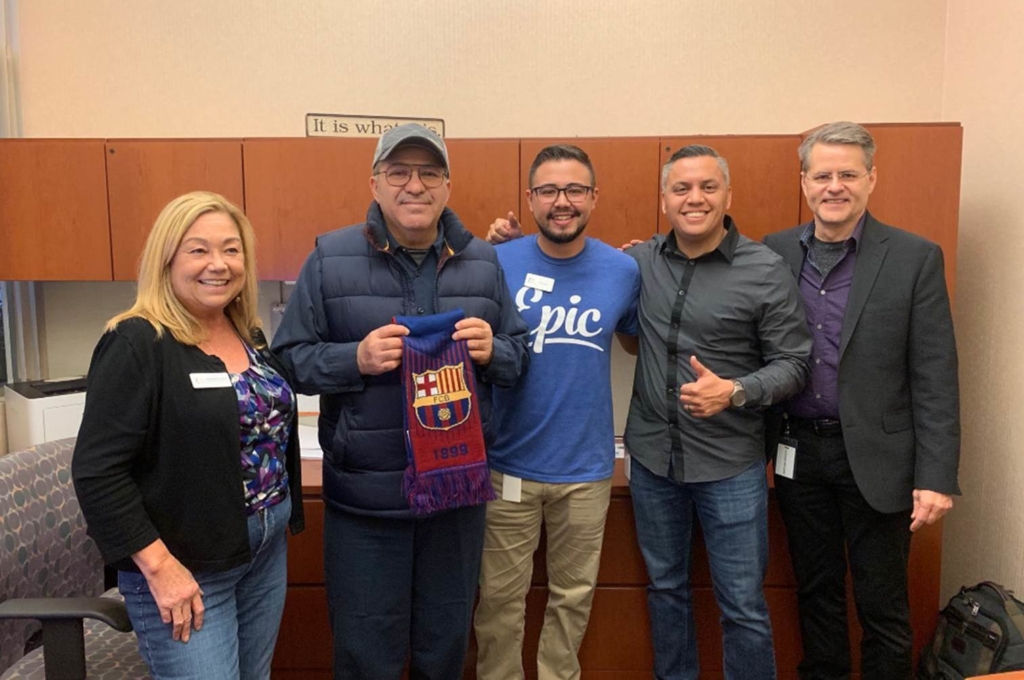 While speaking gigs and new revenue are nice, Michel’s favorite part of being an author is receiving messages from people who’ve seen big results by using his strategies.

One reader worked at a plastics manufacturing company in Pennsylvania. Sharing Michel’s interviewing strategy with her boss was the final win she needed to get promoted.

The CBC Federal Credit Union is using Michel’s Micro Customer Experience strategy to make a trip to the bank something customers look forward to, as evidenced by the photo above.

Without a doubt, the organizational change Michel wanted to inspire is happening.

“In businesses where ‘this is how we’ve always done things’ is a mantra, my book is inspiring people to try a new approach to managing relationships with customers and employees. By changing their processes, they’re strengthening their business.”

Here are a few other readers whose lives and work have been transformed by Michel’s book: