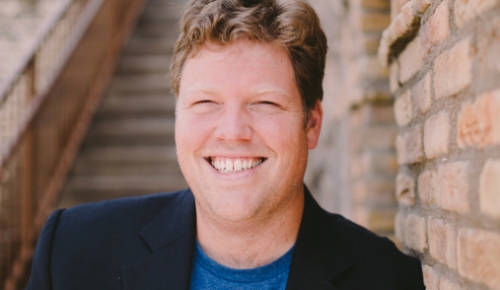 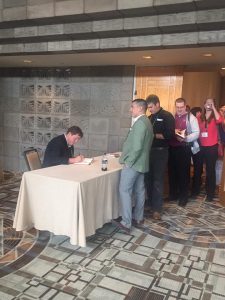 From the time he was a kid, Kirk Drake was determined to work in the banking industry. That’s not hyperbole: at sixteen years old, he established a bank for his high school.

At twenty-one, his college’s credit union hired him as the IT manager. They even paid for his tuition (despite his taking six years to graduate). When he finished school, the credit union took another chance on Kirk, promoting him to CTO.

“Credit unions are more likely to give you your first credit card or your first auto loan than big banks like Bank of America. It’s an industry full of salt of the earth people who want the best for you, so they take risks on people like me. Everything is relationship-driven.”

Kirk fell further in love with credit unions during the financial crisis. He didn’t see a single credit union dealing in mortgage-backed securities or taking advantage of consumers for an extra buck. And he’s never heard of a credit union creating fake accounts to reach a sales goal.

So when he started his own company, Ongoing Operations, which helps financial institutions find IT solutions, he chose to work primarily with credit unions.

Kirk’s decision to shun the big banks was reinforced during the financial crisis, when his biggest non-credit union client walked on a contract, taking $3.5 million with them.

During the same crisis, every single credit union paid their contract with Kirk.

“I did a lot of soul searching after that. I realized that I may not make as much money working exclusively with credit unions, but I knew I’d never have any ethical challenges with them. I could wake up every morning and be proud of my work.”

One of credit unions’ greatest assets, their traditional values, had also led to their technological stagnation.

Kirk knew from experience that credit unions were loyal to their members, employees, and business partners. They built their businesses around small-town American values.

But most credit unions didn’t have the digital marketing or technological services to stay relevant to their customers. As a result, financial technology services such as Apple Pay, Venmo, and PayPal challenged the credit unions.

Kirk decided to use his technological expertise to help credit unions reinvent themselves, but he quickly realized that his task was too big for his current platform. He needed a way to get through to an audience that resisted change.

“Most consumers in the US don’t know what the hell a credit union is compared to a bank, but credit unions didn’t seem to mind. After speaking with hundreds of credit unions, trying to help them solve their technological problems, I asked myself: ‘Does this industry even know it’s on fire?’”

Kirk needed a platform to get his urgent message to credit union boards and management teams. He had to write a book, and he had to write it fast.

Kirk could use his book to educate credit unions on modern website design and digital marketing, which would help the industry he loved (and have the added benefit of helping his business).

Yet, even with his goals solidified, he still had fears related to writing a book.

“Would a book about credit unions be a total flop? What makes me think I have something important to say? Can I actually make a difference? If I was going to write a book, I’d have to put 100 percent of my heart and soul into it. I just didn’t know if my 100 percent would be good enough.”

In order to spread his message across the industry, Kirk needed to spend more time marketing and selling his book than writing it.

“The idea of going on my own and grinding out a book sounded awful. I knew what I had to say, and I can write, I just needed someone to help me say it.”

And because his goal was to write a niche business book, Kirk had no use for a traditional publisher. He saw it as unnecessary validation from a random third party.

Instead, he wanted marketplace validation. The only thing that mattered to Kirk was that credit unions learned from his book—before it was too late.

“The more I thought about it, the more I realized: if my book sucked, the only thing I had to lose was authority on a subject I didn’t think I deserved to be an authority on anyway. Credit unions had been taking risks on me my whole life. It was time for me to take a risk on them.”

Now Kirk needed a guide to help turn his ideas into a book.

Hoping to find clues to solving his problem, Kirk participated in multiple conferences and workshops. He learned useful information at every event, but none of them touched on his most urgent commitment: his book.

Dispirited and running out of options, Kirk attended one final conference, MastermindTalks, where he heard Scribe cofounder Tucker Max speak.

“He said that by writing a book and being open and authentic in it, your audience will give you credit for being vulnerable, and listen to you more. Something clicked when he said that. I realized I was framing this thing the wrong way. I was an underdog—just like credit unions—and people love a good underdog story.”

Kirk also learned that Scribe could get his ideas out of his head and onto the page in a professionally edited book in six months. It was exactly the short timeframe he needed. 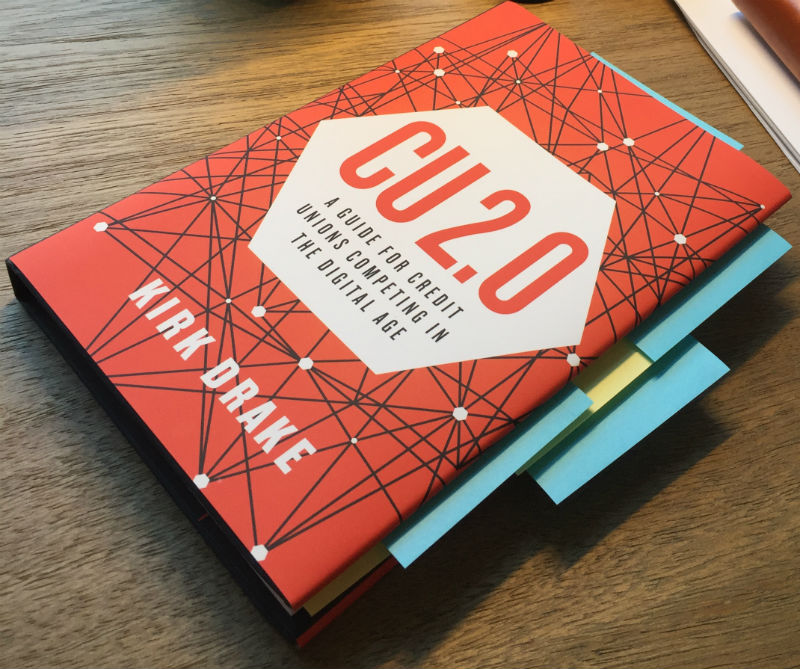 Likewise, their process would allow him to speak through his ideas, which required a fraction of the time it would take to type them out himself.

“The idea of spending 100 hours writing a book instead of 1,000 made me wonder why the hell I’d ever try doing it on my own. The ROI on my time alone made the process worth it.”

Kirk’s choice to use Scribe saved him time, but didn’t completely absolve him of responsibility.

The editing process, especially, proved difficult for Kirk. He’d already elucidated his ideas through a series of phone calls with his editor, making sure to simultaneously weave his impactful personal narrative throughout. That was difficult enough.

Now, after his editor had translated his spoken words into a book manuscript, Kirk had a new obligation: to ensure that his ideas could withstand scrutiny from credit union board members with decades of experience.

“I tend to get lazy in editing. I didn’t want to revise or do extra research or cross every t and dot every i. But I knew I had to do that in order to get the results I wanted. I must have reread my book twenty times.”

Despite his misgivings, Kirk’s focus during the revision process proved invaluable. He even recognized a new way to structure his book.

“I’d been trying to write this really theoretical book, but credit unions didn’t need theory—they needed actionable advice. Suddenly, I saw everything through a different lens.”

With his newfound emphasis, Kirk winnowed multiple chapters and refocused the language throughout.

After a lot of hard work and multiple revisions with his editor, Kirk finally found the right structure for his book to meet his goals.

Now, less than a year after release, Kirk’s book has given him the platform to transform the industry.

Kirk did write and publish his book, CU 2.0: A Guide for Credit Unions Competing in the Digital Age, in time to help save the credit union industry.

He’s also signed contracts to give fifteen keynotes. At each event, he’s selling hundreds of books, so far totaling more than 5,000 unit sales in his incredibly niche market.

As a direct result of his book, Kirk is bringing in $50,000 per month in speaking and consulting revenue.

“By July, I’d be surprised if I’m not doing $100,000 a month. I’m one year removed from my release, and I’ve got a million-dollar-a-year business built entirely around my book launch and building a platform from it. Pretty amazing.”

Most importantly, credit unions have rallied around the book and its precepts. Kirk is now working with twelve new credit unions to help revise their internal processes and member-facing technological services.

“People who read the book and don’t engage with me personally will still avoid a lot of missteps. For the people who do work with me directly, I can see first-hand how they’ve fundamentally changed the way they do business.”

When he set out to write CU 2.0, Kirk never expected to gain notoriety. However, given the close-knit nature of the credit union industry, Kirk’s book has made him a celebrity. 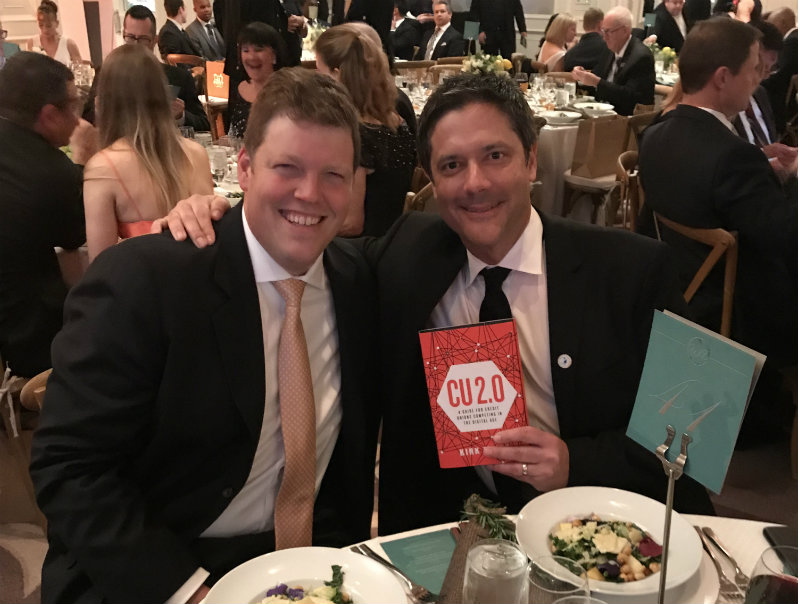 Though he enjoys the reputation, Kirk derives greater satisfaction from the transformations he’s seen in credit unions.

“When people introduce me as an author, there’s an immediate respect that I’d never get without my book. It’s cool, but I don’t care much about the status. I just wanted to make a difference in the industry—maybe help a few credit unions the same way they helped me growing up. And I’ve done exactly that.”