Many people say they want to make a positive impact on the world. For Jawad Ahsan, though, it’s far more than just words.

Jawad’s parents came to the United States from Pakistan in the late ‘70s. As a first-generation American, he had to figure out how to achieve his leadership dreams on his own. He didn’t have a map for how to do it. Yet he still found tremendous success—he’s now the CFO of Axon Enterprise.

To get there, though, Jawad had to go through a lot of trial-and-error and overcome many obstacles. That’s why he’s now driven by a desire to help those leaders coming along behind him. He wants to show them an easier path to the C-Suite, no matter who they are, what they look like, or where they come from. It’s a mission that’s close to his heart because growing up, the idea that he could reach the C-Suite seemed impossible.

“Some people are fortunate enough to be born with a blueprint for exactly how to achieve success. I want to let people know that even if you don’t have that kind of support, you can still get to the C-Suite. It’s not reserved for a select group of people.”

People kept telling Jawad he should write a book.

Initially, Jawad shared his advice with up-and-coming leaders through presentations and seminars. But it wasn’t enough: he knew he could reach more people.

The solution for how to do that quickly became apparent: a book. After his presentations, Jawad kept hearing the same comment: “You should write a book.” The more he thought about it, the more Jawad liked the idea of compiling all his ideas into a vehicle that could travel far and wide.

A book would be part of his legacy, but more importantly, it would help him achieve his North Star: showing people who might not otherwise see a path to the C-Suite that those types of executive positions are within their reach.

“I kept thinking about the people who would read the book and how it could completely transform their life. I wanted to reach everyone, of course, but I was really targeting the young, mid-career professional—maybe a young Black woman—who sees people being promoted around her and doesn’t know how to break out of the mold.”

Jawad wanted to show people the sky’s the limit for them. With a book, he could share the wisdom he’d gained on his own journey, prove that he was a leadership expert, and—most importantly—inspire other people to become leaders in their own right.

Even before he decided to write a book, Jawad had been taking notes and creating outlines for several years. He just wasn’t sure how to assemble those pieces into a book. Axon’s CEO, Rick Smith, shared that he had cobbled together a team of people to help him with his own book: a ghostwriter, a project manager, a marketing professional, and a publisher.

“When Rick was describing to me all the different people he worked with, the first thought I had was, ‘Wow, that sounds like a lot of work!’ Plus, Rick has connections and a fascinating story. I didn’t have anything like that. I was worried I wasn’t going to find a publisher that would find my story all that interesting or be willing to take me on.”

Jawad had a decision to make: should he write the book himself and hope to find a publisher willing to work with him? Or should he commit the time needed to put a team together?

As it turns out, neither option was the right fit. Jawad realized he needed a pre-packaged, comprehensive service that would help him through the whole process, from writing the book to publishing, launching, and marketing it. Every other option was just too overwhelming.

With Scribe, Jawad found the support he needed.

While searching for a service that could help him bring his book to life, Jawad came across a blog post by Scribe co-founder Tucker Max that talked about how most nonfiction books don’t sell well. The post didn’t sugarcoat how tough it is for most nonfiction authors to sell their books, especially if they don’t have the right kind of support from the publisher. It caught his attention.

“This blog post that Tucker wrote was incredibly eye-opening. In it, he talked about the fact that a really good nonfiction book will sell between 2,000 and 2,500 copies. I was floored when I read that. The post caught my interest, and I started researching more into the company. The more I looked into it, the more impressed I was.”

Jawad jumped on the phone with Scribe, and by the end of that call, there was no doubt in his mind that he’d found exactly the right company to guide him through the process. Scribe had the expertise to help him turn his message into a cohesive book, they could get it published, and they would provide him with a dedicated team to help him launch and market his book.

That’s not to say Jawad didn’t have some anxiety around the whole undertaking. How much time would it take? Would Scribe stay true to his vision?

And the biggest fear of all: Would anyone actually want to read the book?

It wasn’t long before Jawad realized he was in capable hands.

In one of Jawad’s first conversations with his publishing manager, Kacy Wren, he shared his concerns. Kacy was clear they would move at whatever pace he was comfortable with. She kept her word, too: at no point in the process did Jawad feel rushed.

Once he met his scribe, John Vercher, Jawad realized he didn’t need to worry about whether Scribe would stay true to his vision, either. John listened to Jawad’s vision and helped him figure out how to package it in a cohesive, impactful way.

But there was still one anxiety lurking: would anyone even find the book interesting?

“Pretty late in the game, I read a copy of the transcript, and I thought, ‘Oh my God, this is just not interesting.’ I remember calling Kacy in a panic—I wanted to hit pause or pivot and write a completely different book.”

Kacy, though, was there to talk him off the ledge. She told him it was a common fear and kept reminding him that he had a good book that was worthy of his confidence.

The skeptic in him still clung to those lingering doubts, but Jawad’s team hadn’t steered him wrong yet. He’d come this far and invested time and money into the process. So, after giving it more thought, he came to a final decision: there was no way he wasn’t publishing his book.

The book positioned Jawad as a leadership expert.

Good thing he did. People loved What They Didn’t Tell Me. Within two months, the book sold 1,000 copies, well ahead of the 250-300 copies most nonfiction books sell in their first year.

The book also enhanced Jawad’s credibility as an expert on leadership. Entrepreneur magazine included his book in their list of essential books for success in 2021, and the NASDAQ featured his book on their four-story marquee in Times Square for an entire week. 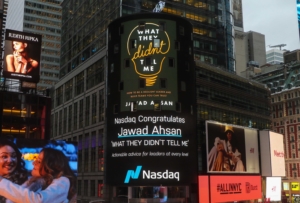 It didn’t take long after the book was out for all sorts of opportunities to start opening up.

“There was an instance at Axon where we needed to provide another company with guidance and leadership. Pretty much as a result of the book, Rick told everyone he wanted me in that role because that’s my expertise.”

People outside of Axon are recognizing him as a leadership expert as well. The founder and CEO of Aira—a company featured on Shark Tank that recently raised a $12 million seed round—read Jawad’s book and was so impressed by his thoughts on leadership that Jawad ended up joining the company’s board of directors. He’s also been invited on podcasts like The Business Builder’s Show and Everyday MBA to talk about leadership and team-building—two areas he’s now become synonymous with.

The roadmap to the C-Suite is already changing lives.

In addition to driving new opportunities, Jawad’s book has helped him create his legacy. Dozens of people have contacted Jawad to tell him his book has changed their lives.

“One young woman said that she had more confidence after reading it to speak her mind and share insights and advice. On an all-hands call, she spoke up to share her thoughts. She told me she never would have done that before reading my book, and she told me the people around her were starting to see her as a leader.”

For Jawad, nothing could be more exciting than getting messages like this because it means he’s doing exactly what he set out to do: to give people the tools and confidence they need to become leaders who are going to drive change. With every person his book reaches—and that number climbs higher every day—he’s doing exactly that.

Here are just a few examples of more people who have been inspired by Jawad’s book: