How Dr. Valerie Rein’s Book Helped Her Create the Thriving 7-Figure Business She Always Dreamed Of 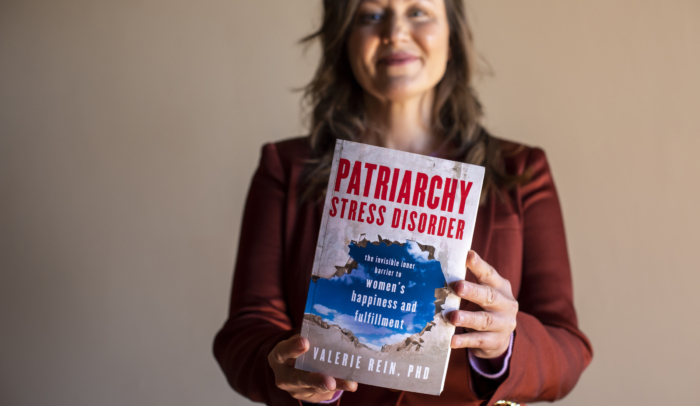 From the outside, Dr. Valerie Rein’s life looked perfect. She had a thriving psychology practice, a beautiful family, and a home in the suburbs. She spent her days helping her clients—most of them high-achieving women struggling with anxiety or depression—live more fulfilling lives. Her evenings were spent enjoying time with her family, especially her young daughter.

Life seemed good, until one day, while on the phone with a client, she noticed she couldn’t move the left side of her face or body. She ended up in the ER, where they treated her for symptoms of a stroke. It was terrifying—and bewildering.

“The official diagnosis was stress, which was extremely puzzling to me. I didn’t feel stressed! I felt the same way I always did.”

That’s not to say Valerie had never felt stress or anxiety. As a young girl, adults constantly scolded her for laughing too loudly, reprimanded her for being “too smart,” and policed her weight and overall appearance. It made her feel like something was wrong with her, which was deeply traumatizing. But she thought she had overcome all that.

When she experienced these symptoms, though, she realized stress and trauma were still lurking, still affecting her. And she knew, if she wanted to survive, she had to heal those old, deep wounds.

Valerie knew it was possible to overcome trauma—she helped her clients do it every single day! As she worked with the women who came to her for help, she witnessed them becoming truly relaxed, happy, and fully alive, often for the first time ever. And, as she started to use the same strategies for herself that she did for them, she experienced the same outcomes.

Valerie knew most women didn’t know how to heal their trauma alone. 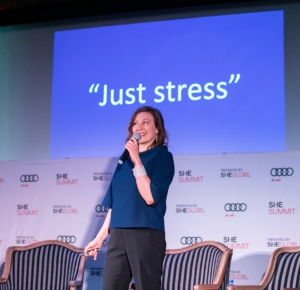 Even as Valerie healed herself, she wondered why every single one of her female clients (even those without traumatic childhood experiences) demonstrated symptoms of trauma. Eventually, she turned to the field of epigenetics for the answer. And that’s when she had her first light-bulb moment: she realized that traumatic experiences are genetically transmitted.

Valerie discovered that, after being oppressed for thousands of years, women have intergenerational collective trauma—what she calls Patriarchy Stress Disorder (PSD). She developed a methodology to heal PSD, and as she began to implement it, she was amazed at how effective it was.

There was just one problem, though. Valerie was never going to be able to reach all the women who needed her through her private practice alone. And that’s when she had her second light-bulb moment: she had to write a book.

“I knew with a book I could share my whole method and express it in simple terms so that every woman could embark on their healing journey.”

Along with helping more women, a book would also establish her as the expert who discovered PSD and the means to heal it, which would allow her to share her message through speaking engagements, retreats, and group trainings. Plus, she’d no longer be tied to seeing clients one-on-one, which would free her up to be more involved in her daughter’s life, while at the same time enabling her to earn more money.

Valerie knew a book was the perfect vehicle for her message, but she was overwhelmed with how to begin.

Valerie knew that, to help as many women as possible, she needed to write a book. And she knew that a book was the key to achieving everything she wanted from her career and her life. But the topic was so big, and so important, that she felt too overwhelmed to start. She kept pushing the idea aside.

“I had no idea how to include the right stories and make it scientifically sound and inspirational. How could I speak to the right person in the right way? It was overwhelming.”

For almost six months, Valerie sat on the idea. She felt paralyzed, with no idea where or how to begin. She was almost ready to give up completely when one of her closest friends reached out to her. They talked about how overwhelmed Valerie felt, and how close she was to giving up before she had written a single word.

They discussed Valerie’s options, but Valerie was adamant that she didn’t want to hire a ghostwriter or self-publish her book. She didn’t want to go through the hassle of trying to find a traditional publisher, either. She wanted something in-between: a company that would help her publish and market her book while letting her stay true to her message and her voice.

Valerie’s friend told her she had the perfect solution, and then connected her with Scribe. The moment her friend told Valerie about the company, Valerie intuitively knew it was exactly what she was looking for. With Scribe, she would get a full team of people to support her every step of the way. Scribe felt like a village that would help her share her message with the world. It was the perfect fit.

Valerie knew Scribe could help her write a book, but she questioned whether becoming a published author was worth the investment. 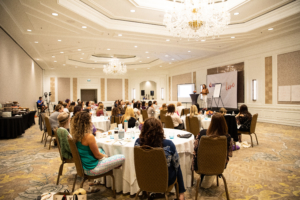 After talking with her friend and exploring Scribe’s website, Valerie knew she’d be in good hands. She could see that Scribe had a proven method for creating and launching great books. She knew they would help her with every part of the process, from organizing her thoughts to design and marketing. She trusted them completely, but just as she was getting ready to sign up, doubt set in.

“It was a significant investment. I wasn’t sure I could trust we would produce a solid product.”

Valerie decided to do more research: she looked at other authors who had worked with Scribe, and saw the success they achieved. She talked with the team at Scribe about her fears too. They reassured her that, no matter what, they would not let her produce a bad book.

When they said that, her intuition told her they were serious. They weren’t blowing smoke, and they weren’t sugarcoating things just to get her money. Right then and there, Valerie signed on to write and launch her book with Scribe.

Valerie’s team guided her every step of the way—especially when things got tough.

Valerie and her team got to work. But PSD wasn’t an easy topic to write about, and there were times when the scope of what she was trying to do paralyzed her.

But Valerie’s team recognized that, and all of them rallied around her and offered her their complete support. That enabled her to keep moving the project forward when her doubts threatened to overwhelm her.

To Valerie, it felt like her team were collaborators. They listened to her fears, they championed her, and, perhaps most important of all, they helped her stay true to her voice while guiding her in making her book accessible to the women who needed it.

And, when Valerie felt triggered and emotionally drained by the material, they were there for her, holding her up and gently guiding her forward.

“There were times when I didn’t trust myself, but I knew my team had complete trust in me and the project, and that kept me going.”

When Valerie’s book launched, she hit every goal she had been dreaming of. 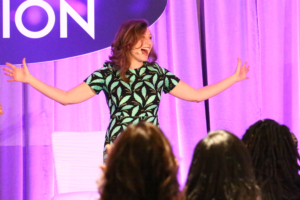 When Valerie held Patriarchy Stress Disorder in her hands for the first time, it felt completely right. She felt utterly joyful: the book was everything she had dreamed of. And when the book launched, with help from her team at Scribe, it was an unbridled success in every single way.

As a result of her book, Valerie was invited to appear on over 100 podcasts, including The Worthiness Lab, Defending Lady Macbeth, and The Entrepreneur Way. She appeared on NBC and ABC television networks. She was also invited to be the featured speaker at the SHE Summit, and she was interviewed for articles about PSD in Good Housekeeping, Psychology Today, and SWAAY, among others.

It wasn’t just media outlets and other psychologists embracing her message, though. Ordinary women—the very people Valerie wanted to help—embraced her book and her message, and continue to do so to this day. In fact, when she hosts her 3-day training, The Thriving Experience, she always asks who is there because another woman mentioned the book to them. When she does that, every single hand goes up.

Valerie knows the book was what enabled her to reach all the goals she had originally set for herself. Between her speaking engagements, large group trainings, and retreats, she’s no longer tied to her private practice.

“In the course of a few months, my business went from six figures to seven figures. And best of all, I have the privilege of reaching women from all over the world with this work, which I never could have accomplished in my one-on-one psychology practice.”

Valerie’s book is helping thousands of women reclaim their power and their lives. 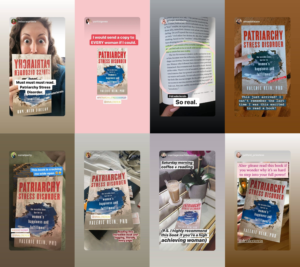 Valerie is still amazed at the success the book brought her. But what truly makes her heart sing is hearing about how the book has impacted the women she is so committed to healing.

Not long after Valerie’s book launched, a woman contacted her to tell her the profound impact the book had on her life. She told Valerie that, before reading Patriarchy Stress Disorder, she never would have thought she was living in survival mode. She had a seven-figure business and beautiful daughters. She thought she was happy and thriving.

Once she read the book, though, she realized that she still had wounds she’d never addressed around self-esteem and romantic relationships. As she read the book and started working to heal herself, though, something amazing happened—something that Valerie herself experienced firsthand.

“She began to feel safer, to open her heart to bigger possibilities. In life, in love, in her business, she started embracing opportunities, and soon she was thriving, not just surviving.”

Valerie hears stories like this every single day. And for her, seeing so many women learn to step into their power and live their authentic lives is even more amazing than she could have imagined. To know that she is helping to heal the trauma of thousands of years is an honor and a privilege. 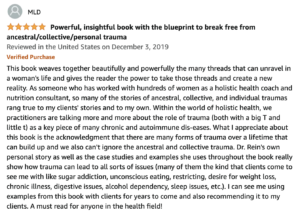 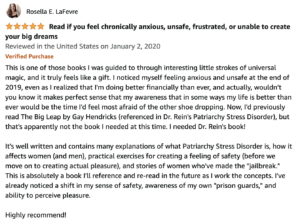 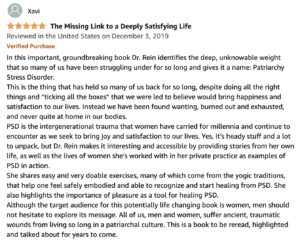