How Will Leach Used Monthly Content to Land a $200k Client, Launch a New Business, and Speak in Front of Thousands Across North America

During his time spearheading innovation research in the consumer packaged goods (CPG) industry, there was one mantra that Will Leach kept at the forefront of his mind:

To get customers to adopt a new product or service, the first step is a trial, which is achieved through repeated exposure to that offering. When Will launched his book, Marketing to Mindstates, he approached marketing that book like he would a business.

“The trial was my book launch. From there, I had to start thinking about ongoing marketing that would not only keep re-introducing the book to new buyers, but also get my current buyers to talk about the book to their friends.”

With the metaphorical snowball rolling downhill, Will’s focus became maintaining momentum while getting the book’s ideas in front of the people who could impact his business. 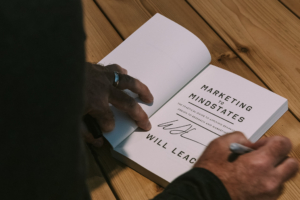 Will didn’t want to haphazardly publish content—he wanted a content strategy driven by a clear and achievable goal.

The first hurdle Will faced was organizing his ideas into a coherent plan of attack. The idea of ongoing marketing sounded great, but several questions loomed large:

Answers to these questions became more elusive the more Will considered them. The nebulous cloud of ideas swirling in his mind seemed impossible to fit into any kind of shape.

Then there was the time commitment. Will was running TriggerPoint Design, his behavioral research and design consultancy, and had just launched his second venture, the Mindstate Group, a few months before the book’s release. Even with the best intentions and a rock solid strategy, he knew that consistently producing content would be a huge challenge for him.

Will focused on what he did best and leveraged the strengths of Scribe to develop a marketing plan that worked for him.

An unclear strategy and tight schedule weren’t enough to dissuade Will, though. For help, he turned to Scribe, which had been his companion throughout the book creation process.

When Will met with his Scribe marketing team, the first question he always asked was one that no other agency had been able to answer: “What’s working for other authors?”

He also appreciated that Scribe was willing to try new things, including launching a Content Studio to meet his needs for ongoing marketing. With the goal of establishing thought leadership with business professionals, the Scribe team put together a plan for Will to work with a writer on crafting two monthly articles: one for Forbes and one for his LinkedIn page.

This approach would keep a steady stream of content in front of different audiences and help Will establish authority with those most likely to reach out for help with their marketing.

Along with a regular output, Will wanted to take a unique approach with his articles. With Scribe’s help, he decided his Forbes column would focus on applying concepts from the book to the business challenges that marketers face. On LinkedIn, he’d go a slightly different direction and apply mindstates to pop culture phenomena like Game of Thrones and The Bachelorette.

It was a bold strategy that quickly paid off… just not in the way Will expected.

The three-article series explaining the Mindstates of Game of Thrones characters caught the attention of organizers for the IIeX Behavior US conference, who asked Will to present on the topic to a room filled with marketers—one of the audiences he’d hoped to reach. Sitting in the audience was a representative from the pharmaceutical giant Merck. Shortly after that talk, Will was invited by Merck to give a 60-minute presentation as part of a marketing training meeting.

His presentation opened the eyes of Merck’s leadership.

“I showed them how speaking to the mindstate of their audience, doctors, could help the company predict whether their newest offering would be accepted. Then bam! They bring me in to start doing branding for an internal research consultancy and to create an internal behavioral economics think tank called BEAM: Behavioral Economics at Merck.”

Will estimates those two talks generated, at a minimum, $200,000 worth of new projects. 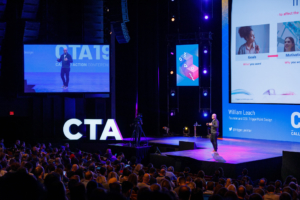 Will’s content was landing him on stages, but as he tried out new ideas each month, something else was happening: his confidence in his expertise and his abilities was growing. Like many authors, he experienced imposter syndrome while writing his book and in the early days of publishing content post-launch. But with every article, the internal doubts were quieted.

Seeing his ideas validated by conference organizers and large companies gave Will the courage to stretch himself in terms of the opportunities he was pursuing. He applied to be a speaker at the Unbounce Call to Action Conference, which hosts over 3,000 attendees.

Will had never spoken to that large of an audience before, and CTAConf was known for bringing in professional speakers with lengthy highlight reels. But Will’s application was more than just a shot in the dark—it was a flag plant. When the organizers came back and asked why they should consider Will, he sent them what gave him the confidence to apply: his content.

“The whole point of this conference is action. It’s not about ideas that work in theory. They want to see how your ideas can be applied to real-world situations, and that’s all we’d been doing with my content. I sent them what I had and landed the gig.”

A member of the British Columbia chapter of the American Marketing Association (BCAMA) saw Will’s presentation at CTAConf and asked if he’d do a webinar for their group.

At the same time, an article on experience design that referenced Disney caught the attention of a Disney Parks researcher who contacted Will to offer her thoughts. Another article evaluating the behavioral psychology used in the design of Amazon’s 4-Star store in Dallas led to an email from one of Amazon’s researchers inviting Will to work together.

“Do you know how many thousands of vendors are trying to get into Amazon every day as a researcher or as a marketing company? All I did was post my article to LinkedIn with the right hashtags and someone from Amazon reached out to me!”

Repurposed content is fueling the growth of Will’s new company. 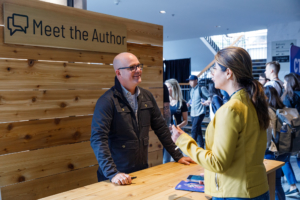 The importance of repetition hasn’t just steered Will’s strategy with his book post-launch. It’s also helped dictate what happens with his content after it’s published.

Growing a new company is no easy feat, but using the content he’s already created, Will has a pipeline of great ideas to share with those interested in the Mindstate Group, turning their blog, email list, and social media accounts into viable channels for attracting new business.

His articles have also given birth to new forms of content Will hadn’t considered previously.

“We have a new series we’re doing on YouTube where I discuss a topic for an hour. All I do is send our producer one of my articles to use as the basis for our discussion.”

Beyond just lead generation and new content creation, the articles Will created with the intention of promoting his book have helped make this new venture possible. It’s opened the door for people asking Will to share his expertise in a new context: training and development.

The Mindstate Group was created in anticipation of what the book could do for Will’s career, but he acknowledges that his ongoing content has been the fire powering the locomotive.

“Two years ago, there was no such thing as the Mindstate Group. It didn’t exist. It’s here today because this content created markets where people are asking me to share my ideas to a different group of people and train them on how to apply these insights.”

Did Will anticipate that two monthly articles would power the success of his new company and open doors he never thought to knock on? Not quite, but he’s not surprised.