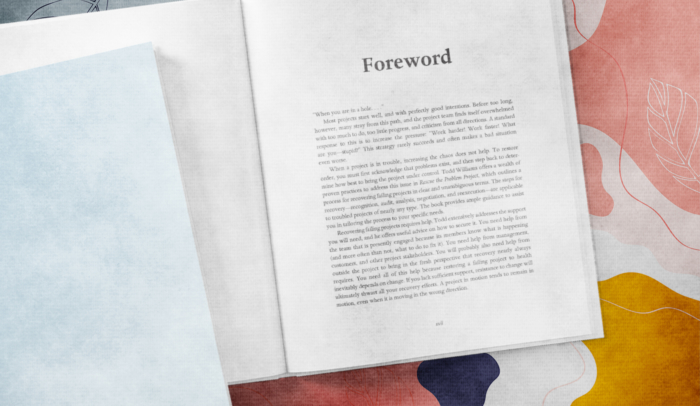 Before you read this, let me emphasize this point:

Most books do not need a foreword.

If you are unsure if your book needs a foreword, then it does not.

However, if you think it might, this guide is designed to help you think through whether it does, and if so, how to get one written.

What is a Book Foreword?

A foreword is basically an introduction that’s written by someone other than the author. The reasons for it are two-fold:

1. Confer status and credibility on the author

A foreword is often written by someone who is a credible authority or expert. Having this person write a foreword is a great way to show that a first-time author should be taken seriously.

For example, when James Altucher released Choose Yourself, he asked Dick Costolo, CEO of Twitter at the time, to write the foreword. Many readers did not know who James Altucher was at the time, but they knew that the CEO of one of the largest tech companies in the world was willing to vouch for him and his book, which was a strong signal of credibility.

2. Provide context and background for the reader

For some nonfiction books, a foreword explains why readers need this book, and says things about the book that the author cannot.

This context could also say nice things about the author that the author cannot say about themself. It’s much more powerful when someone else calls you a “thought leader,” but (like blurbs) it has to be the right someone.

For example, we did a book with a man who was well known in real estate, but not known outside that space. He was friends with Kevin Harrington, who wrote the foreword. Kevin is well known in many business areas, and not only conferred status on the author, but also said some great things about him that he could not say about himself, or they would have come off as bragging.

Note again that great forewords do both—they confer status and provide context. If the foreword won’t accomplish one of these two things, then it shouldn’t be written. As long as it’s doing at least one, then the foreword is doing its job.

Who Writes the Foreword?

If you want a foreword for your book, the first question is “Who do you know that could write one?”

If you have a good relationship with someone who makes sense, great. Move down to the “how” section.

If you do not know someone that makes sense, then you have two options:

For many reasons, #2 is the best option.

While it may be possible to get a foreword from someone you don’t know, it will be very hard. It’s easier to get a blurb than a foreword, and the best people to ask are those who you have a personal connection to.

A foreword tends to be a “personal vouch,” and that sort of thing is much easier to get from someone with whom you already have a relationship.

It’s also a lot of work. Unlike a blurb that is only a few sentences, this person has to be willing to write a substantial piece of work for you. Also, their name in your book reflects on them, either positively or negatively. If you reach out to someone you don’t know, it is hard to ask for both of those things.

If you are unsure about asking someone to do a foreword, you are better off asking for a blurb instead.

A rule of thumb we like to use with our authors is that if we won’t put the “Foreword by [NAME]” on the cover of the book, then you are better off asking the person for a blurb.

How Do They Write the Foreword?

Writing a foreword seems pretty obvious: ask someone to write a foreword, and they do it, right?

Some people do exactly that. And in a perfect world, they would all do that, but they don’t, for two reasons:

1. People don’t have time to sit down and write.
2. They’re not a good writer, so they get intimidated.

For these reasons, we recommend that authors give their foreword writers two options if they do not have the time or desire to sit down and write it the conventional way.

This is a really simple framework that helps someone get started. You can send these exact instructions to your foreword author:

“Thank you so much for agreeing to do this. Here is all I need:

For this option, make sure that, if you need to make any edits to the foreword (aside from obvious misspellings), you get the approval of the author.

You can also “record” their foreword and then have that written (we do this for our authors if they ask).

This is the basic list of questions we use for a foreword interview:

How Long Should the Foreword Be?

Only rarely should a foreword exceed 500 words. If it’s over that, it needs to be exceptionally good.

The mention of the foreword author on the cover is enough to confer status and credibility, and any more than 500 words may detract or distract from the book itself.

The foreword is like a movie trailer—tell the audience what they need to know in a short amount of time, then get out of the way for the main event.

Does the Foreword Author Need to Read the Book First?

The two reasons for a foreword (confer credibility or provide context) don’t necessarily require any commentary on the content.

The foreword should really be focused on the author: who are they, what is their work, and what are they aiming to do with this book?

They don’t always need to have read the book to understand the background and context of what’s going on in the industry or space that the author is writing about. They can—but it’s not crucial.

Now, of course if the foreword author wants to read it, then let them, obviously. But generally speaking, you should know them so well and have such a good relationship with them that they have plenty to say about you without knowing the specific contents of the book.

Understand that most people take forever to write their foreword, so start this process early. If you do not, if you try to do this last minute, it will cause a delay with your book.