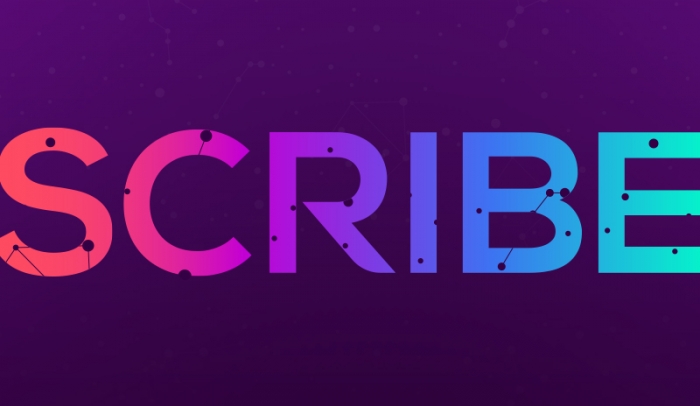 When Michael Cronin from the Austin Business Journal met Zach at an event, he didn’t really believe our culture was what we said it was. He didn’t outright call Zach a liar, but he also didn’t believe it. So we offered him the same thing we offer anyone who sincerely wants to see how it works:

“Interview anyone you want in the crew. Ask them anything. You can even interview people who’ve left. Come to a meeting. Hang out at lunch. Whatever you want to see, you can see.”

Michael came from the world of investigative journalism, so I think his first instinct was to look for the trick. He cautiously accepted our invite, and slowly over about 2-3 months, he got to know us. He interviewed several people in the crew. He sat in meetings. He talked to freelancers. He dove deep.

As he got to know us, he pitched a story about us to his editors. They loved the idea. Then he wrote it. This is what he said:

“I wanted to let you know that my fellow reporters and our editors read the piece for the first time earlier this morning. They flipped out once they learned who you are and how you do what you do.

I wish you guys could have seen my editors talking about Scribe Media this morning. I walked into the conversation several minutes after it started and realized some of my colleagues thought the editors were making things up about your company.”

Here is the entire article.

Yes, it is gated. Yes, I hate that too. There’s nothing I can do about them gating their own content.

What I have done is–with the permission of the ABJ–excerpt the story heavily to give you an idea of what Michael saw and wrote about our culture.

I also intersperse his article with video interviews we’ve done about our culture, you can both read an outsiders view, and see what our people say: 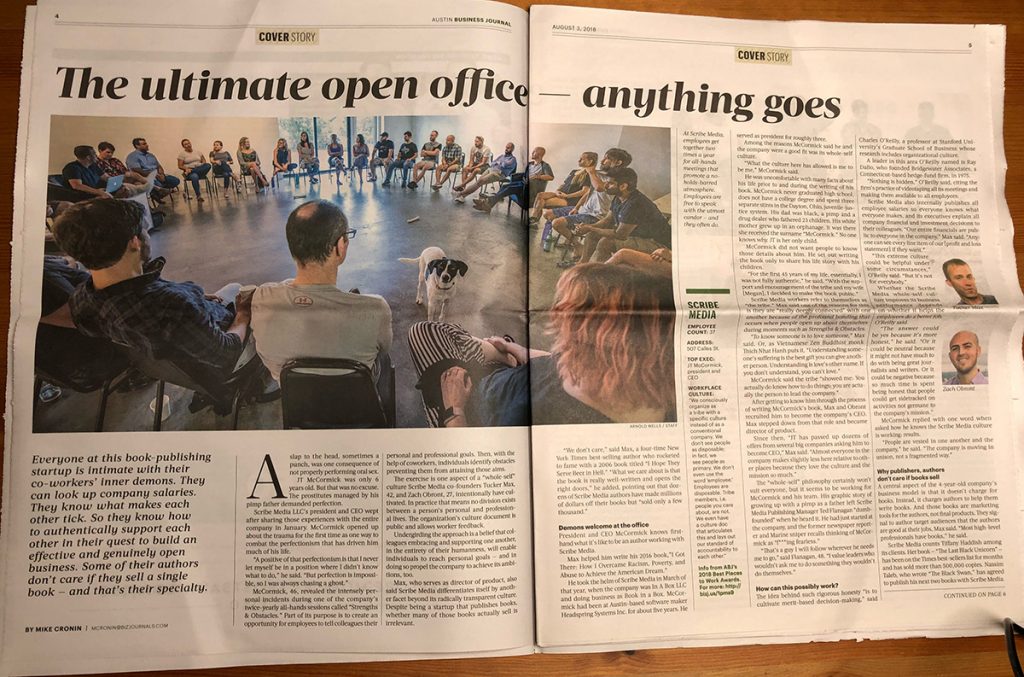 “A slap to the head, sometimes a punch, was one consequence of not properly performing oral sex.

JT McCormick was only 6 years old. But that was no excuse. The prostitute managed by his pimp father demanded perfection.

Scribe Media LLC’s president and CEO wept after sharing those experiences with the entire company in January. McCormick opened up about the trauma for the first time as one way to combat the perfectionism that has driven him much of his life.

“A positive of that perfectionism is that I never let myself be in a position where I didn’t know what to do,” he said. “But perfection is impossible, so I was always chasing a ghost.”

McCormick, 46, revealed the intensely personal incidents during one of the company’s twice-yearly all-hands sessions called “Strengths & Obstacles.” Part of its purpose is to create an opportunity for employees to tell colleagues their personal and professional goals. Then, with the help of coworkers, individuals identify obstacles preventing them from attaining those aims.

The exercise is one aspect of a “whole-self” culture Scribe Media co-founders Tucker Max, 42, and Zach Obront, 27, intentionally have cultivated. In practice that means no division exists between a person’s personal and professional lives. The organization’s culture document is public and allows worker feedback.

Undergirding the approach is a belief that colleagues embracing and supporting one another, in the entirety of their humanness, will enable individuals to reach personal goals — and in doing so propel the company to achieve its ambitions, too.”

Here is the public Scribe Culture doc he is referring to.

This is a semantic difference, but I would not quite say that we advocate “no division” between private and work life. It’s more that we all want to be able to bring our whole self to work.

Here’s Erin Tyler, our Creative Director talking about the realness of the culture:

“President and CEO McCormick knows firsthand what it’s like to be an author working with Scribe Media.

Max helped him write his 2016 book,“I Got There: How I Overcame Racism, Poverty, and Abuse to Achieve the American Dream.”

He took the helm of Scribe Media in March of that year, when the company was In A Box LLC and doing business as Scribe Writing. McCormick had been at Austin-based software maker Headspring Systems Inc. for about five years. He served as president for roughly three.

Among the reasons McCormick said he and the company were a good fit was its whole-self culture.

“What the culture here has allowed is me to be me,” McCormick said.

He was uncomfortable with many facts about his life prior to and during the writing of his book. McCormick never graduated high school, does not have a college degree and spent three separate stints in the Dayton, Ohio, juvenile-justice system.His dad was black, a pimp and a drug dealer who fathered 23 children. His white mother grew up in an orphanage. It was there she received the surname “McCormick.” No one knows why. JT is her only child.

McCormick did not want people to know those details about him. He set out writing the book only to share his life story with his children.

“For the first 45 years of my life, essentially, I was not fully authentic,” he said. “With the support and encouragement of the crew and my wife [Megan], I decided to make the book public.” 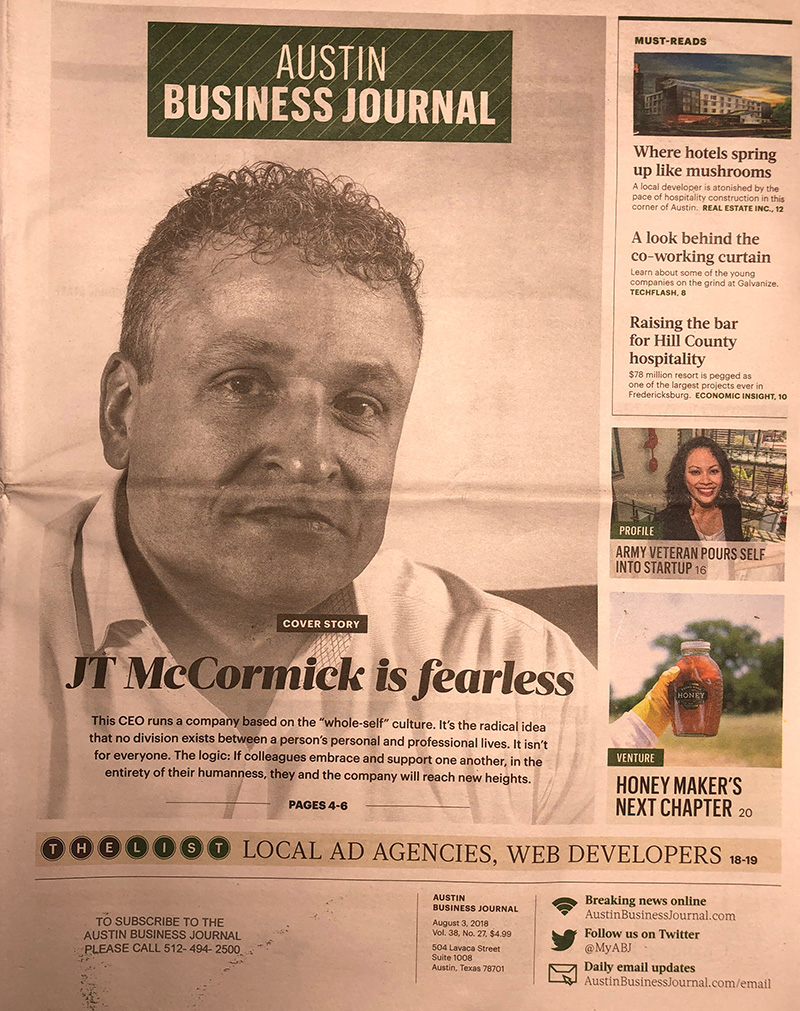 Here is JT talking about what the Crew has done for him:

and about his book and Scribe:

“Scribe Media workers refer to themselves as “the crew.” Max said one of the reasons for this is they are “really deeply connected” with one another because of the profound bonding that occurs when people open up about themselves during moments such as Strengths & Obstacles.

“To know someone is to love someone,” Max said. Or, as Vietnamese Zen Buddhist monk Thich Nhat Hanh puts it, “Understanding someone’s suffering is the best gift you can give another person. Understanding is love’s other name. If you don’t understand, you can’t love.”

McCormick said the crew “showed me: You actually do know how to do things; you are actually the person to lead the company.”

After getting to know him through the process of writing McCormick’s book, Max and Obront recruited him to become the company’s CEO. Max stepped down from that role and became director of product.”

Meghan McCracken, our Head of Manuscript talks about her favorite part of the culture:

“Since then, “JT has passed up dozens of offers from several big companies asking him to become CEO,” Max said. “Almost everyone in the company makes slightly less here relative to other places because they love the culture and the mission so much.”

The “whole-self” philosophy certainly won’t suit everyone, but it seems to be working for McCormick and his team. His graphic story of growing up with a pimp as a father left Scribe Media Publishing Manager Ted Flanagan “dumbfounded” when he heard it. He had just started at the company, and the former newspaper reporter and Marine sniper recalls thinking of McCormick as “f***ing fearless.”

“That’s a guy I will follow wherever he needs me to go,” said Flanagan, 48. “I value leaders who wouldn’t ask me to do something they wouldn’t do themselves.”

Here is Charlie Hoehn, Head of Video, describing how the Scribe culture has impacted his life:

“Scribe Media also internally publishes all employee salaries so everyone knows what everyone makes, and its executives explain all company financial and investment decisions to their colleagues. “Our entire financials are public to everyone in the company,” Max said. “Anyone can see every line item of our [profit and loss statement] if they want.”

“McCormick replied with one word when asked how he knows the Scribe Media culture is working: results.

“People are vested in one another and the company,” he said. “The company is moving in unison, not a fragmented way.”

Scribe Media counts Tiffany Haddish among its clients. Her book — “The Last Black Unicorn” — has been on the Times best-sellers list for months and has sold more than 500,000 copies. Nassim Taleb, who wrote “The Black Swan,” has agreed to publish his next two books with Scribe Media. And Times best-selling financial writer David Bach is working with the company to publish a book later this year.

Max calls Scribe Media a 21st-century publishing company — one he predicts ultimately will generate annual revenue in the hundreds of millions. Falling short of that would mean Max and his colleagues “did something wrong,” he said.

“We’re in it to win it,” he said. “This company is about our people and our profit and our service.”

Here’s how I describe the long term vision for Scribe Media:

McCormick said the company culture “can be very hard for some people to acclimate to,” particularly those who are accustomed to the norm in “corporate America where you have to be two different people,” one at work and one at home. Some even “have self-selected out,” McCormick said.

“Thousands of people apply for every job opening,” Max said.

“That blew me away,” McCormick said. “Even $10 billion companies don’t get that when they put out a career description [for an open position]. It shows how many people want to be a part of our culture.”

It’s what attracted Brittany Walters to Scribe Media more than two years ago. The director of operations believes she was employee No. 11.

“I found the company by doing lots of research on culture,” said Walters, 30. “I was looking for companies that were intentional in making decisions.”

Walters said the whole self is something that she and her colleagues “actually talk about every single day,” crediting the culture for the gentleness and grace with which Scribe Media employees treat each other.

She recounted what happened after she chose to reveal that her beloved grandfather passed away recently.

“Historically, I would never have brought that up at work,” Walters said. But she did at Scribe Media and Walters said the love and support she received from “the crew” helped better equip her to process the feelings of grief and mourning. She asked for one day off. McCormick gave her two.

Then, he sent an all-staff email “mandating that no one contact me for at least 48 hours,” Walters said. “That was astounding — and much needed.”

Another story about how the normal operations of our culture deeply impacted someone:

Total payroll accounts for 37 employees, but Max said he anticipated that number to mushroom to between 40 and 45 by the end of the year.

Key positions the executive team is looking to fill now are an experienced account manager and an experienced salesperson, Max said. “And, of course, we are always looking for great writers.”

The company occupies Suite 107 at 507 Calles St. and is expanding into an adjacent space to make room for the extra people.

About 70 percent of the workforce is based in Austin. The rest are remote. One full-time person is based in Australia and another is in Jamaica. Scribe Media also boasts more than 100 contractors and freelancers.

“Finding great people will always be our biggest challenge,” Max said. “It’s not just finding skilled people, though. For us, great people are those who not only have the skills, but who fit in our culture. For the right people, our company and its culture is a dream.”

How to make my application stand out

Book in a Box Rebrands as Scribe Media