8 Lessons For Launching Your Book With A Kickstarter (And Raising $25,000+) 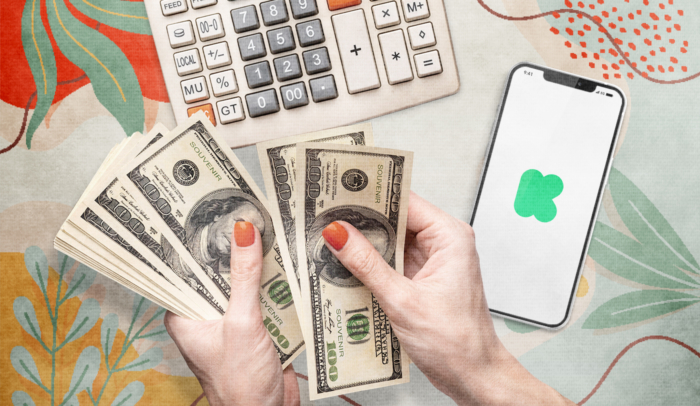 Writing a book is a financial commitment.

Even if you aren’t financing the costs yourself—as you would if you were self-publishing—you’re spending thousands of hours creating something that might not sell. That time is not free—you could be spending it doing any number of other things that will be making you money.

That’s why Kickstarter is such an appealing option to authors. You can get paid for your book while you’re still writing it, removing some uncertainty from the process.

Our very own Head of Author Marketing, Charlie Hoehn, recently ran a Kickstarter for his book Play for a Living: A Coffee-Table Book for Your Inner Genius that generated $35,936—over 3.5x his $10,000 goal.

After watching him and other authors successfully execute profitable Kickstarter campaigns, and after seeing even more authors crash and burn with their Kickstarters, we decided to put together this guide.

If you want to launch a Kickstarter to sell copies of your book—whether you’ve finished writing it or not—this is the place to start.

We’re going to go through the most important lessons we’ve learned, the things that separate successes from failures, but first, we’re going to break down exactly what a Kickstarter is.

What a Kickstarter Is and Isn’t Good For

First, let’s start with a list of things a Kickstarter isn’t.

A Kickstarter is not:

A lot of authors have the misguided notion that Kickstarter is a place where you collect funds for a project before you start it. When it comes to books, this is wrong.

If you start a Kickstarter for your book, and you do not finish or publish your book, you have to refund all the money you raised.

Every person who “backs” your Kickstarter is buying a copy of your book. Just like any other retail experience, if you can’t give them what they paid for, you have to give their money back.

Also, if you want to run a successful Kickstarter, you’re going to have to hustle super hard. Even if your idea is brilliant, raising $1,000,000 is incredibly difficult—no book has ever done it.

So, what is a Kickstarter good for?

A book Kickstarter is good for two things:

Each backer becomes more than a person who bought your book. They’re a person who funded your project—and if they bought a higher package, they’re someone who owns something you made exclusively for a small group of people.

If you already have a book that you’re writing or have finished writing, a Kickstarter can be a great way to quickly monetize your writing prior and build a fanbase.

If you want to do it well, you need to know these key lessons.

One of the first things Charlie did when he decided to run a Kickstarter was he sat down and spent hours living in an Excel spreadsheet.

Why’d he done that?

Because launching a “successful” Kickstarter without knowing your number can actually lose you money—like this man who raised over $70,000 for a board game and then lost his house trying to cover shipping costs.

So Charlie broke down every expense he would have to deal with:

Before Charlie even began, he had an exact quote from his printer, Bang Printing:

Knowing exactly how much this campaign was going to cost him allowed him to set his prices at a margin that made him money.

If you don’t get these numbers ahead of time and assume everything will work out, you might end up losing money just to afford shipping out your book.

Good Night Stories For Rebel Girls, one of the most successful book Kickstarter crowdfunding campaigns in history, raised $675,614—but their initial goal was only $40,000. 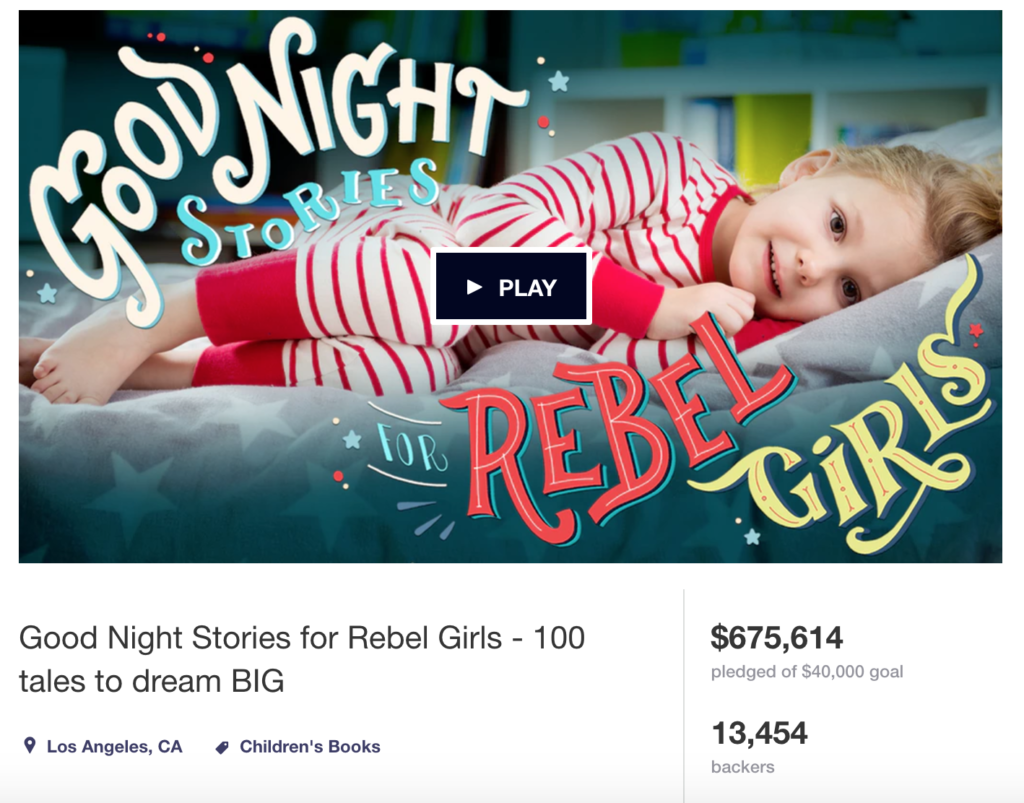 The reasoning for this is really simple.

On Kickstarter (unlike competitors like IndieGoGo), if you raise less than your goal, you don’t get any of the money. It all goes back to the supporters.

You also need to be confident you can raise half of your goal in the first few days of your launch.

Every Kickstarter has two periods where funding spikes:

It’s basic buyer psychology. Some people want to be the first in line, some people scramble at the last second because they’re scared of missing out.

It’s remarkable how profound this effect is when you look at the numbers. For example, here’s a graph of Charlie’s fundraising over the course of his campaign: 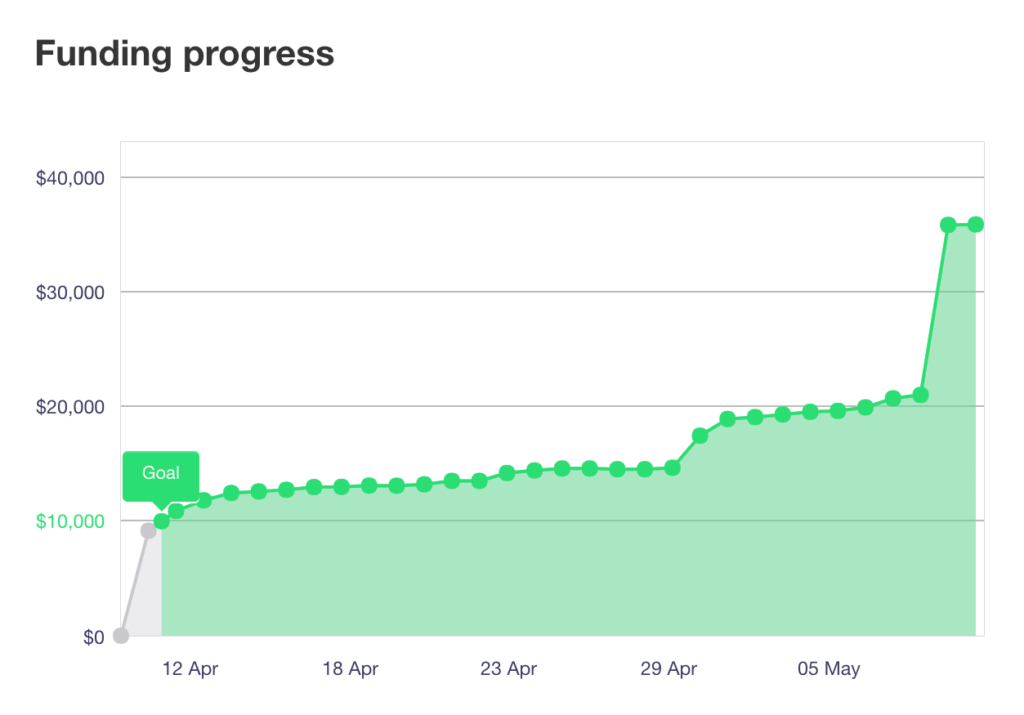 Almost all of the funding came either on the first day or on the last day. The people who bought it between those dates—so-called “casual buyers”—are very rare.

3. Choose Packages That Make Sense For You

A major mistake you’ll see Kickstarters make is offer something that seems cheap and noncommittal in their lower packages—only to lose all their money trying to fulfill it.

Offering a t-shirt in your cheaper packages is a classic example.

Let’s say your second lowest package covers the cost of production and shipping your book, plus $20 extra. If you promise a t-shirt in that order, just the cost of shipping it internationally can eat your entire margin and lose your money.

In Charlie’s Kickstarter, he didn’t offer any physical bonuses beyond his book for packages that were under $250.

This doesn’t mean his packages weren’t awesome—they were loaded with high-value add-ons—but he didn’t have to pay to physically ship them.

Get creative and think of high value, low-cost additions you can offer to backers for lower packages.

4. Invest In Professional Media and Design

If your Kickstarter product is something no one has seen before but everyone wants—like a hoverboard—then you don’t have to show the greatest prototype in the world.

If you’re trying to sell a book, something people have seen millions of before, you better make it pretty damn appealing. And nothing is more appealing than a great video.

John Lee Dumas raised $453,803 for his book, The Freedom Journal, which promises to help you achieve whatever the #1 goal in your life is in 100 days. A big part of his success can be chalked up to a great video: 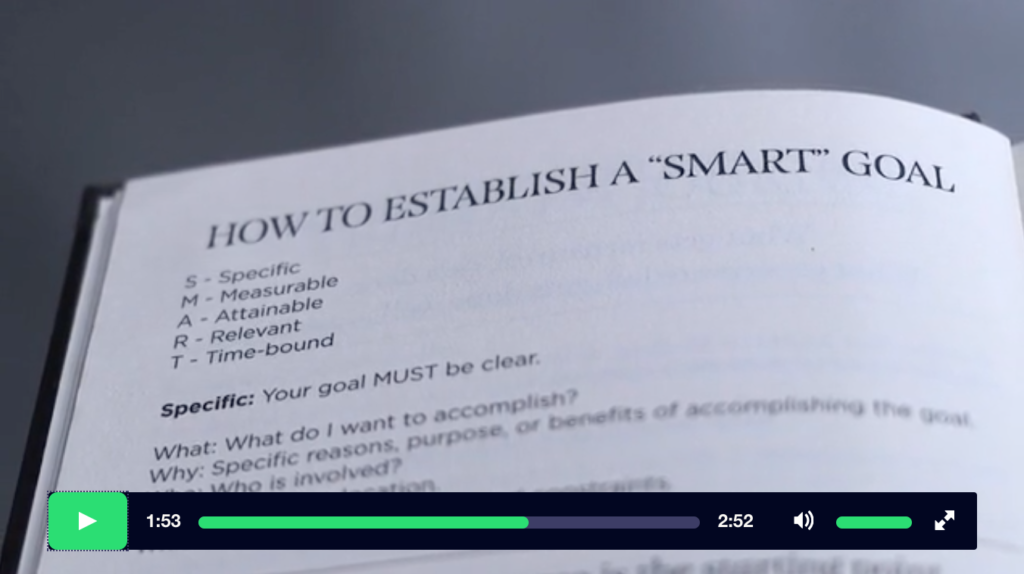 The video does several things well:

This is nothing new in the book world. Authors have always benefitted from high-quality book trailers. One of the most famous examples is Tim Ferriss’ trailer for The 4 Hour Chef, which is the most viewed trailer for a nonfiction book of all time and helped propel the book to bestseller status:

But it’s more than just video.

Unless you have a design background, working with a professional is the best way to do this.

5. Teach Your Audience How To Buy Your Book

You need to walk people through the Kickstarter process, either in your video or in your copy—ideally, both.

Most people have never backed a Kickstarter before. They don’t know what it really means to back a project or how Kickstarter works. In your video, you need to explain:

It sounds pedantic, but it’s not. You need to remove every possible point of friction from the process, ensuring that everyone who wants to back your project does.

The last point is especially important.

Often times, you’ll have to limit shipping to certain countries. If you have readers in those countries who want to buy your book, but can’t do it through Kickstarter, you have to give them an option. 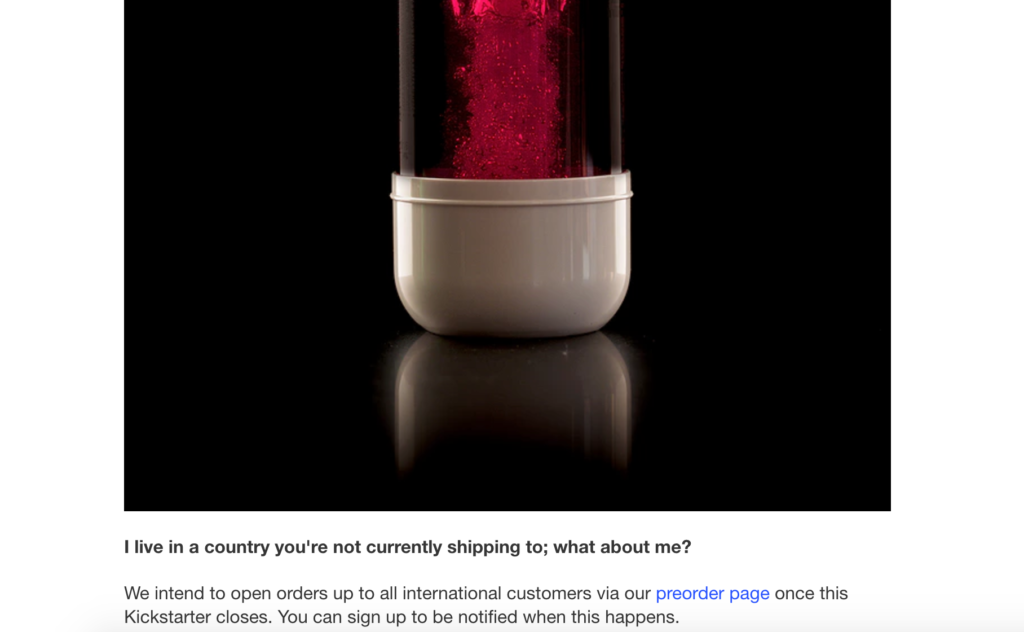 This image is taken from The Aviary Cocktail Book’s Kickstarter, which is already one of the most well-funded book Kickstarter’s ever (and is—as of this publication—still growing).

Because they cannot offer their book to most countries through Kickstarter due to shipping costs, they give international customers an easy way to preorder their book.

There’s this myth that in order for your crowdfunding project to succeed, it needs to go viral. You need to amass a big social media following and get them all to share it.

Generally speaking, email is over three times as likely to convince someone to spend money compared to social media.

On top of this, it’s really rare that a book Kickstarter goes viral.

People tend to share physical products—especially tabletop games, for some reason—on social media far more than any other Kickstarters. Tabletop games like Conan, for example, are 9.6 times more likely to go viral.

People with millions of followers shared Charlie’s Kickstarter, which generated some funding for him, but around 90% of his funds were raised through emailing his network.

Not through major media placements, Facebook advertising, or some crazy PR stunt—basic email to people he already knew.

One month before Charlie’s Kickstarter launched, he reached out to his network. His message was simple:

Below are screenshots from the email Charlie sent: 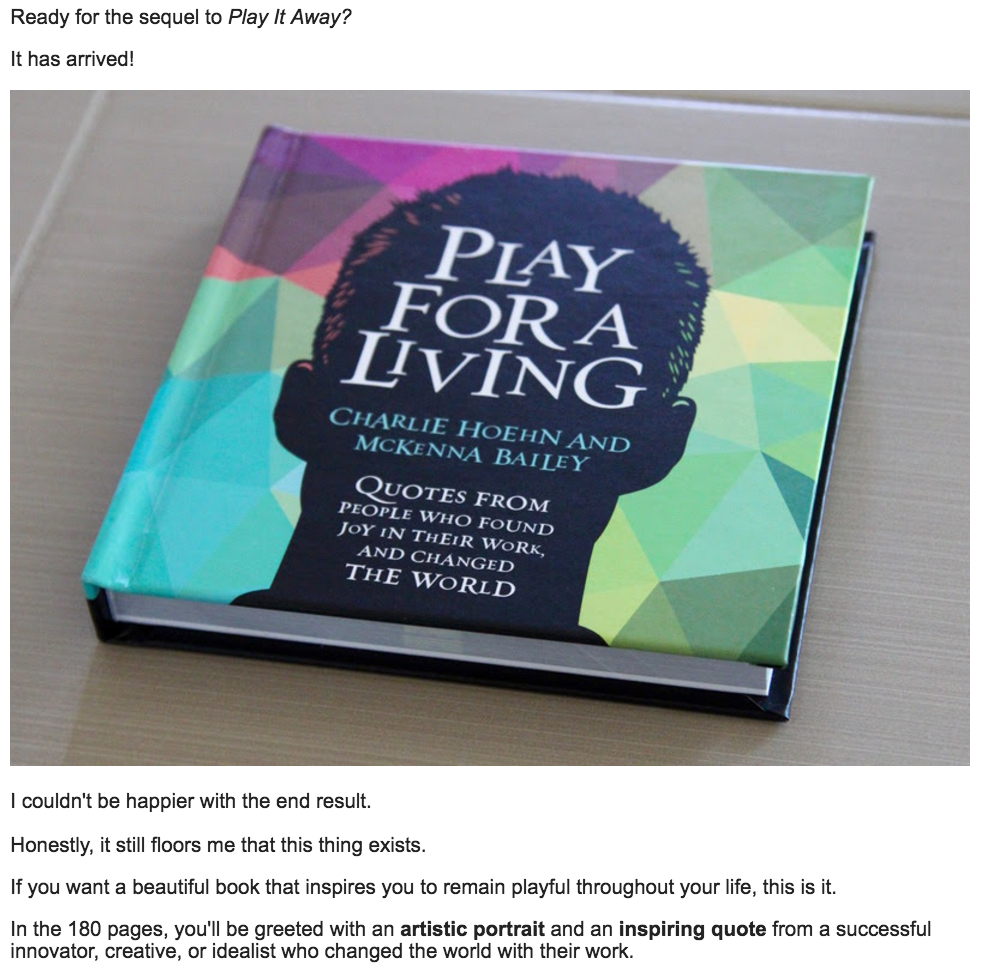 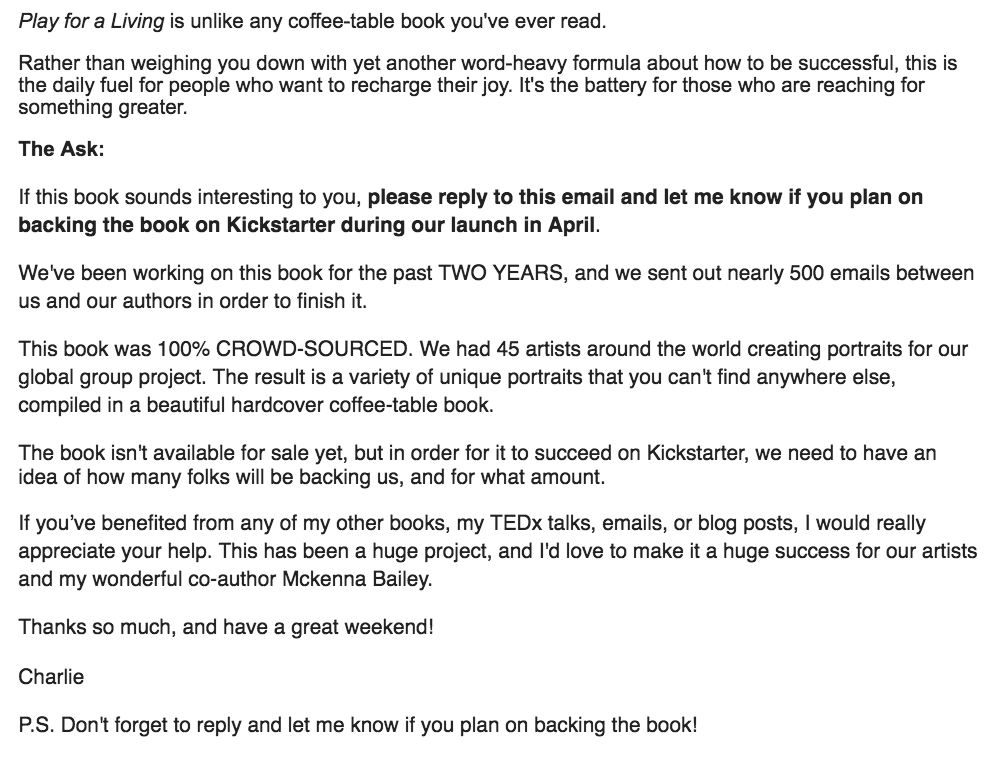 Once someone has openly stated intent, they are far more likely to actually convert. The bulk of Charlie’s initial traction came from this one email blast.

What if you don’t have a big email list?

In our guide to launching an Amazon bestseller, we broke down step-by-step how you can export the email addresses of every LinkedIn connection you have, and then email them in bulk.

There are thousands of projects on Kickstarter, many of which will appeal to the same people as your book.

For example, Charlie’s book was specifically for people dealing with anxiety. While his campaign was running, another campaign aimed at helping people with anxiety was also running.

The Gravity blanket is an incredible success—it’s raised over 4 million dollars—and its audience is exactly the same as Charlie’s book.

So Charlie reached out to John Florentino, inventor of Gravity, with this pitch: 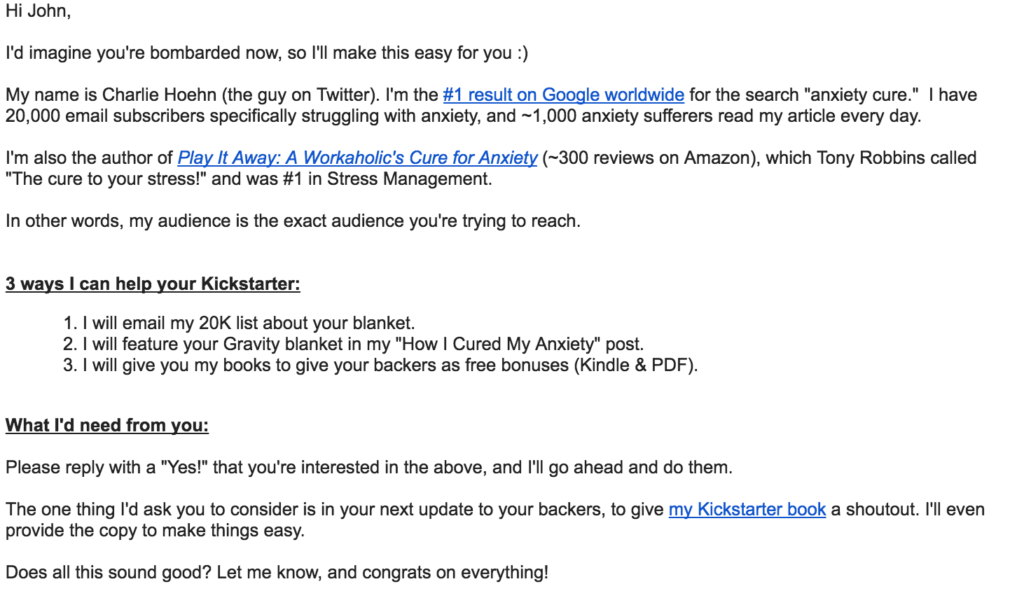 Obviously, Charlie was offering a ton of value. John took him up on it, and as a result, they were both able to benefit each other by promoting their non-competitive, but overlapping products to their respective audiences.

Who on Kickstarter is running a project that dovetails with yours? Figure out who those people are, and how you can collaborate with them to reach more backers.

8. Make It Easy To Buy Your Book After Your Campaign Ends

If you sell thousands of books through your Kickstarter but don’t have directions for how to buy your book in the future, you Kickstarter becomes a memorial page.

People can see how successful you were, but can’t engage with you now.

That’s not ideal. You want the momentum from your successful Kickstarter to carry over into book sales for years.

The easiest way to do this is to change your page after the campaign ends, like Rafael Araujo:

As soon as you land on this Kickstarter page—one of the most successful book Kickstarters ever—you see that this book was so good 8,297 people ordered it just through Kickstarter.

You’re also able to pre-order through Amazon by simply clicking the button that Rafael added to the center of his page when his campaign ended.

His book’s Amazon listing currently has over 275 reviews, almost all of which are 5-star, meaning his Kickstarter page is still driving book sales today.

No matter what your goals for your book are—if you want to be a bestseller, use your book to generate leads, or become the expert in your space—your marketing has to go above and beyond a Kickstarter campaign.

You should be going on podcasts, writing articles that speak to your audience, being featured in major publications, possibly even doing speaking gigs.

If you’re ready to start charting your book marketing course, click here to contact us. Even if we don’t work together, we love helping authors in any way we can.

How to Measure Book Launch Success

How to Create a Winning Media Pitch (Step-by-Step Guide)