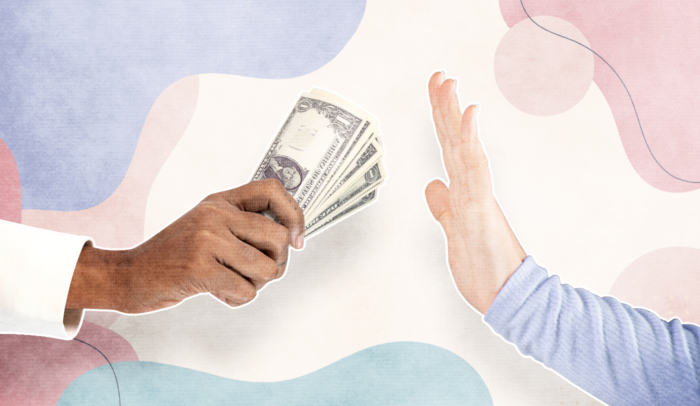 We often get this question from authors:

“Can I reduce the cost of my book by splitting the profits with you? Won’t that align our incentives, if you get a royalty on my book sales?”

No, we won’t do this, and no, it won’t align our incentives. We don’t take royalties precisely because that creates perverse incentives that actually hurt both our authors and us.

In a service model, the author pays a set fee and then the publisher works to serve the interests of the author by publishing a book that will help them accomplish their goals.

A royalty-based business model forces publishers to, in many ways, work against the interests of the author. This is because when a publisher makes their money on royalties, they are caught in this trap:

Quite simply: the royalty model forces publishers to focus all of their attention on BOOK SALES and nothing else.

This hurts authors. When a traditional publisher agrees to a book deal, what they are buying is the “print license” to the book. In exchange for paying the author an advance, the publisher has the right to make all the money that comes from the sales of the book (minus the royalty, of course).

Those sales are the ONLY way they make money. They get nothing from anything else the book does for the author, like driving sales to a business or generating speaking fees. If the author makes 100k that year from speaking about the book, the publisher sees none of that.

Because of this, the publisher’s goal is to sell as many copies of the book as possible, and nothing else. That’s the only way they make money on the deal, after all, so it makes sense that this would be their goal. That means they only want books they think will sell, and they want to position those books so that they appeal to biggest, widest audience possible, and promote them in a way that only focuses on sales.

This is usually not in the interest of most authors, because book sales alone are not the main goal or benefit most authors get from books. Of course, every author wants to sell as many books as possible, but that’s rarely the PRIMARY goal for the book.

What is the primary goal? It varies per author, but here are most of the common author goals:

You might be thinking, “Tucker, that’s fine, but all of those things come from more sales. It’s all the same.”

In fact, focusing so much on sales can be an OBSTACLE to getting attention for a book or reaching an author’s goals.

How could that be? There are many examples:

Let’s look at a specific example of this in action:

Melissa Gonzalez, our first client at Scribe, is an expert in pop-up retail. She’s done retail pop-ups for some of the biggest brands in the world, and there’s almost nobody on earth more qualified to teach about this topic than her. And, fortunately enough, pop-ups are a growing trend and many people in the retail business are interested in them.

For Melissa, the decision to write a book is obvious. But if she sticks to her niche (pop-up retail), the chance for her to generate a lot of book sales is small. There just aren’t a lot of people who care about that subject. In fact, the only people who really care are those who work in the retail business.

So, as a result, at the very EARLIEST stages of the book process, a traditional publisher would want her to expand the topic of her book, and make it applicable to a large audience. This would not only dilute her message, it would force her to write a book that is NOT in her personal best interest.

The best bet for her is to be VERY niche and focus her book exclusively on the pop-up retail niche. She can dominate that niche because not only is she an expert in it, she’ll write the FIRST book about it. If she does that, then she will be seen as THE expert in pop-up retail, and the odds that her book will land in the hands of the decision-makers in retail are very high.

Which is exactly what happened.

Melissa’s book was so niche—its title is The Pop-up Paradigm—that it sold only 1,000 copies in the first year. But, because it’s the best book by far on pop-up retail—in fact, it’s the ONLY book on that subject—it got covered by all the media outlets that cover retail, and has been read or at least heard about by almost all the major decision makers in retail.

As a result, she got a ton of media exposure, tripled incoming leads to her consulting business, and even signed a major seven-figure contract with one of the largest mall companies in the world.

That’s fantastic for her, and in fact, that’s exactly the type of success we try to help our clients get.

But note—even though the book has led to her making millions, she did NOT make it from selling a lot of copies. She made her money indirectly, through her business.

But if we are a royalty business, we only care about selling books, because we wouldn’t own any portion of her consulting business.

In Melissa’s case, had we taken royalties, we would have made almost no money as the publisher. But the book was a HUGE success for Melissa; she estimates that she’s gotten a 100x return on the price of the book.

This is the definition of misaligned incentives.

Let’s give another example of an author that really wanted to sell a lot of books so he could hit a bestseller list. He was still better served by our service model than a traditional publisher’s royalty model: Josh Turner.

Josh had a pretty big email list, about 40k people, and knew he could drive the necessary pre-orders (about 5k) to secure a spot on the Wall Street Journal Bestseller List.

But he also wanted his book to push people to his consulting company and his video course, and he wanted to be able to discount and print hardcover copies of his book to give away for marketing.

We helped him design his release strategy so that he sold over 6k books to his audience prior to his release by heavily discounting them, and this led to him launching at #7 on the Wall Street Journal Best Seller List.

A traditional publisher would have tried to maximize the revenue from those sales, so they would have priced the books higher, and the appearance on the list likely wouldn’t have been possible.

That’s why we charge a flat fee and use the service business model. It enables us to make sure our incentives can be aligned directly with creating the best possible outcome for you, the author.

Make no mistake about it: this model benefits us as well.

Think about it: how do service businesses grow and excel? By doing a GREAT job serving the needs of their clients, so their clients will talk about them and spread the word about their service. This is especially true for books.

Because our incentives were aligned with our clients, in our first year of business, 40% of our clients came from word of mouth or direct introduction.

By doing the best book possible with our authors—regardless of whether book sales are a primary goal—we create a win/win scenario with our authors, which are the most aligned incentives there are.

How to make my application stand out