Britt East wouldn’t trade places with anyone. He’s married to a wonderful, supportive man. He has a great job. He’s secure in himself. But it wasn’t always that way. As a gay man in America, Britt knows firsthand how painful it is to be isolated and ostracized.

The prejudice Britt has encountered hasn’t only come from members of the straight community, either. Like so many other gay men, he has experienced the painful, hostile judgement of other men in the queer community. It hurts, and, along with the messages that come from mainstream culture, it’s made him question himself and whether he’s good enough.

After catching himself turning those same prejudices and judgements on other gay men—judgements about their weight, their age, their ethnicity, their race—Britt had an epiphany. The intolerance that was rampant in the queer community was causing gay men to cut entire swaths of people out of their lives. The result was an epidemic of loneliness, anguish, and pain.

Hard on the heels of that realization came another one. The old saying was right—life is a buffet, and most of us are starving to death. Britt was tired of starving. And he was tired of other members of his community feeling the same pain.

“I wanted to raise our attunement to all of the harm that we experience, and empower all of us in the queer community to experience our full agency as we moved through the world.”

With some help, Britt realized a book was the perfect platform to build credibility around his message. 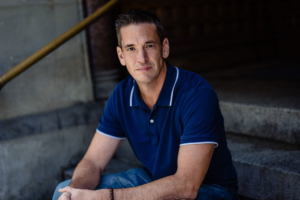 Britt started writing articles to share his message, but it wasn’t enough. There were so many queer people out there who needed to hear his message of empowerment and healing. He needed a bigger platform. A book seemed like a viable option, but one that Britt was conflicted about. On the one hand, people had been saying for years he should write a book.

But he didn’t view a memoir that focused on his journey and his pain as the best way to help heal the fractures he saw in the gay community. So, he shrugged off suggestions that he should publish a book… that is, until his life coach said something that changed his perspective:

“He said I could flip the script by making the reader the hero of the story.”

Suddenly, Britt had an answer to how to create a bigger platform for his message: he could write a book that was about the reader, not him. Rather than splashing his pain all over the page, he could give specific, actionable advice borne from his own experiences.

Everything shifted for Britt in that moment. He knew many gay men were denied access to familial knowledge about how to live their best lives in this day and age; a book would give him the chance to provide that missing link. It was an incredible way to be of service to the world, especially to other members of the queer community.

That wasn’t all. A book would also establish him as a thought leader, and lay the foundation for a personal brand focused around healing the fractures within the queer community. That was the work that made him feel most alive, and a book would open the door to engaging in that work more fully.

When it came time to publish the book, Britt found himself at a complete standstill.

Britt has always been a writer. So, once he made up his mind that he was going to write a book, that’s exactly what he did. Eventually, he had a rough draft of a manuscript. He hired a queer editor to go over it, and he loved the final result.

Then, he hit a major roadblock: he didn’t have the faintest idea how to get the book published.

Britt knew he didn’t want to go the traditional publishing route. It took too long, and he wanted to maintain control over everything. But if he self-published, he worried his book would look cheap—like something someone did in their spare time.

“I was so apprehensive; this was a bucket list project for me, so it had to be as wonderful and beautiful as I could make it.”

He had written a book that would help people throughout the course of their life. But he decided that unless he could find a company that could help him do justice to the finished product, his book would never see the light of day.

Britt set out to find a company that would help him create a book that lived up to the vision he had in his mind. 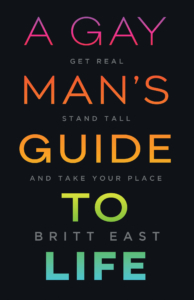 Determined to find a company that would help him make his dreams for his book come true, Britt started researching companies online. He stumbled across Scribe’s blog and was immediately impressed. When he read a Scribe post about the pros and cons of traditional versus self-publishing, he was amazed at how clear and cohesive it was.

The more Britt read from Scribe, the more comfortable he felt. He loved the advice they freely shared about every aspect of the book publishing process, especially the information about how to design a great book cover.

Along with Scribe, Britt researched several other self-publishing companies. However, he quickly discounted them.

“I was struggling to find anybody even close to what Scribe offered.”

All the other companies focused primarily on ghost writing and coaching. It felt like they were all built around hand-holding, but Britt didn’t need his hand held; he already had a manuscript. He needed someone who would guide him in turning that manuscript into a tangible, beautiful book, then help him get it in front of the people who would resonate with its message.

The more Britt thought about it, the more obvious it became to him that Scribe was the company for the job. It wasn’t long before Britt signed up for the Publishing package, along with some additional editing services, production of an audiobook, and an end-to-end marketing strategy for launching his book.

Britt’s team exceeded his expectations every step of the way.

Once Britt signed up, though, doubts started to creep in. Foremost among them: would he get lost among all the other authors? Scribe felt like a big agency, and he worried that his publishing manager wouldn’t keep him informed or keep things moving.

And that wasn’t all. His doubts about the quality of the finished product came flooding back, too.

Soon, though, Britt realized he had nothing to worry about. His publishing manager made him feel like a top priority. She kept him up to date on everything that was happening and made sure everything happened on time.

And the cover? Britt was absolutely elated with the very first one they sent him. It didn’t need a single change! In fact, there wasn’t a single part of the publishing process that felt arduous or tedious. Every step, from start to finish, was incredible.

When Britt and his husband, Scott, first saw the finished book, they were overwhelmed with joy. Scott had been with Britt every step of the way, from providing emotional support to helping to proofread the many drafts. Sharing the experience of holding the book for the first time—and seeing how beautiful it was—was absolutely magical.

“It was shocking how satisfying and emotional it was. To actually hold it in our hands felt like a dream.”

Britt’s book quickly established him as a thought leader in the queer community. 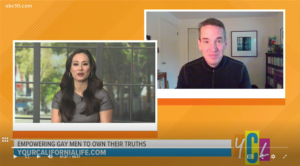 When Britt published A Gay Man’s Guide to Life, he was overwhelmed with the response it received. His website—which he started just before launching the book—quickly garnered tens of thousands of visitors. His Facebook business page (which he also launched when the book came out) grew to 11,000 followers.

As impressive as those numbers are, the book’s impact goes far beyond that. People everywhere wanted to hear more from Britt about how the fractures he saw in the queer community could be healed, both individually and collectively. Since the book launched, he has been invited to appear on over three dozen podcasts, including Queer Words, the Breakfast Leadership Show, and the Wrote Podcast.

Britt knows all of these opportunities are because of his book.

“There’s something magical about the way a book carries weight and builds authority.”

Further cementing his status as a thought leader are the numerous awards his book has won. For example, the American Book Fest named A Gay Man’s Guide to Life the winner of the 2021 Best Book Awards in the LGBTQ: Non-Fiction category.

The book also won a gold medal in the Independent Author Network Book of the Year Awards, was a Distinguished Favorite for the LGBTQ Non-Fiction category of the NYC Big Book Awards, and took home another gold medal in the Living Now Book Awards’ Personal Growth Category.

For Britt, receiving this kind of recognition not only validates his message, but also gives him a way to advocate for his work and spread his message to as many people as possible.

The book showed people they could move through their pain and start to heal.

As soon as A Gay Man’s Guide to Life launched, Britt started getting letters from people all over the world telling him how much the book impacted them. In many instances, their letters are heartrending reminders of how deeply members of the queer community are impacted by prejudice, intolerance, and pain.

Take the letter from a man in his 70s, for example. He had spent a lifetime hiding who he was from his family, and was only just now coming out to them. He wanted Britt to know how much he appreciated the support and advice his book offered.

That letter touched Britt deeply, as did the letter from a person who said he was estranged from his family. In Britt’s book, he found the support and advice he had always craved. Finally, he could find a way to move forward, accept himself and others, and let go of the judgemental mindset that was holding him back from a life of fulfillment.

“People tell me the book makes them feel seen, often for the first time, not just in their orientation and who they are, but also in their anger and their anguish.”

That’s exactly what Britt had set out to achieve, because he knew that if he could make people feel seen in everything they’ve had to endure, he could help them shift. He could show them how to stop dwelling in the pain and the loss and the heartache, and start healing the wounds in themselves and the fractures in the queer community.

Britt knows, from all the letters he’s received, that the book has sparked a fire in queer people: a fire to heal, and a fire to help others heal. And he couldn’t be happier, because for him, that’s what it’s always been about.

Here are a few more people who have been touched by Britt’s message.