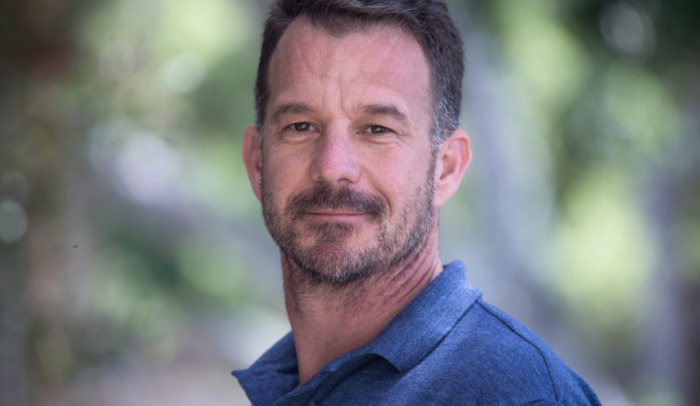 For a long time, Doug Brackmann thought he was broken.

Doug grew up with the diagnosis of ADHD and was told his whole life that he wasn’t good enough. He dropped out of high school at seventeen and became homeless shortly after, living out of his car. Doug spiraled into addiction and quickly reached rock bottom.

Fed up with his life, Doug set out to find out what was wrong with him so he could fix it and hopefully live a normal life.

After years of psychological work, Doug finally realized that there was nothing inherently wrong with him—and that a lot of what he hated in himself and had been criticized for throughout his life were simply untreated ADHD-related behaviors.

With this knowledge, Doug learned multiple new skills to compensate for his ADHD and regained control of his life. He went to recovery for his addictions, went back to graduate high school, worked tirelessly to support himself through a bachelor’s degree at USC, and eventually earned dual PhDs in psychology from UCSD.

Over the last fifteen years Doug has found unique ways to help teach top performers with ADHD how to focus, be present in their lives, and positively channel their inner restlessness.

Doug is now a licensed psychologist, and he’s devoted his life to helping others face the same issues that plagued him for so long. Doug now spends all of his time training the highest performers—entrepreneurs, CEOs, pro athletes, inventors, and Navy SEALs—to learn how to perform even better using the techniques he had to learn to compensate for his ADHD.

For Doug, the idea of writing a book served three major purposes. First, the book would be a natural extension of his life’s work, putting everything he has learned into one place and giving him the credibility to help grow his business as a psychologist.

Second, Doug thought a book would be a great way to educate potential clients. He noticed himself regularly teaching and repeating the same basic concepts, and felt the book could serve as a vehicle to educate his target audience, minimize repetitive conversations, and make his work with clients more enjoyable.

Third, and most important, it could help others solve the issues and deal with internal struggle that plagued him for so long. He trains high performers, but there are so many others who need his help who can’t afford him—why deny them this knowledge? Why not put it out in the world to help them as well?

Doug tried to write the book himself for ten years, spending thousands of hours (and dollars).

For ten years, Doug failed to write his book.

Doug is very knowledgeable about helping top performers with ADHD—but in this case, his knowledge was paralyzing him.

Doug kept trying to write his book, but he would constantly sit down to write it, get overwhelmed, and retreat. He would occasionally write a solid chunk, but then the same cycle would repeat itself, leaving Doug frustrated and his book unwritten.

The ironic part: one of the main subjects of Doug’s work is self-sabotage. He knew exactly how the process worked on paper. In fact, he could tell you exactly why he wasn’t writing his book.

But even that insight didn’t help Doug—and it actually made everything worse.

While it was valuable to know why he wasn’t writing his book, that information was only half the battle. Knowing why something isn’t working isn’t the same as knowing what will.

On the quest to find what would help him write his book, Doug first thought it was an information problem. He listened to podcasts, signed up for online courses, and read books about how to write books.

But none of it worked.

Doug spent thousands of dollars and wasted thousands of hours trying to write his book himself, and was no closer to publishing the book he wanted to share with the world.

He didn’t need to be an expert in the process of writing a book to share his life’s work, he just needed help translating the expertise and experience he already had into book form.

“Scribe gave me the confidence that where I was heading was where I wanted to go, and helped me get there in ways I couldn’t have done on my own. For me, trying to write a book on my own didn’t work, but with Scribe I finally wasn’t alone—experts were there to support me, and it was clear that if I just kept showing up and doing my part, I was going to end up with the book I always wanted.”

Doug’s favorite part of Scribe’s process was the built-in accountability. He no longer had to worry about the process of writing a book, or if it would ever get done all.

Instead, throughout the entire process, Doug was given specific actions to complete in manageable and clearly defined timeframes.

Working with Scribe also meant that Doug was no longer only accountable to himself. For someone prone to self-sabotage, that extra layer of external accountability was crucial in ensuring Doug stayed on track from start-to-finish.

Even though the writing process was collaborative, it was still daunting and required a lot of uncomfortable introspection for Doug.

Even though Scribe helped Doug write his book, the process was much more personal than Doug was expecting.

To get clear on exactly what he wanted to say, Doug needed to closely examine his past, confront deepest fears, and be honest with himself in what needed to be shared with the world. Those weren’t always the most comfortable conversations.

That level of unbridled honesty was scary for Doug, and while examining those moments was deeply uncomfortable, Doug felt a moral obligation to relieve his reader of the same pain he felt at his lowest, which helped him power through.

Ultimately that transparency and courage has been rewarding for Doug, and the most vulnerable parts of the book are some of the pieces that most connect with readers. 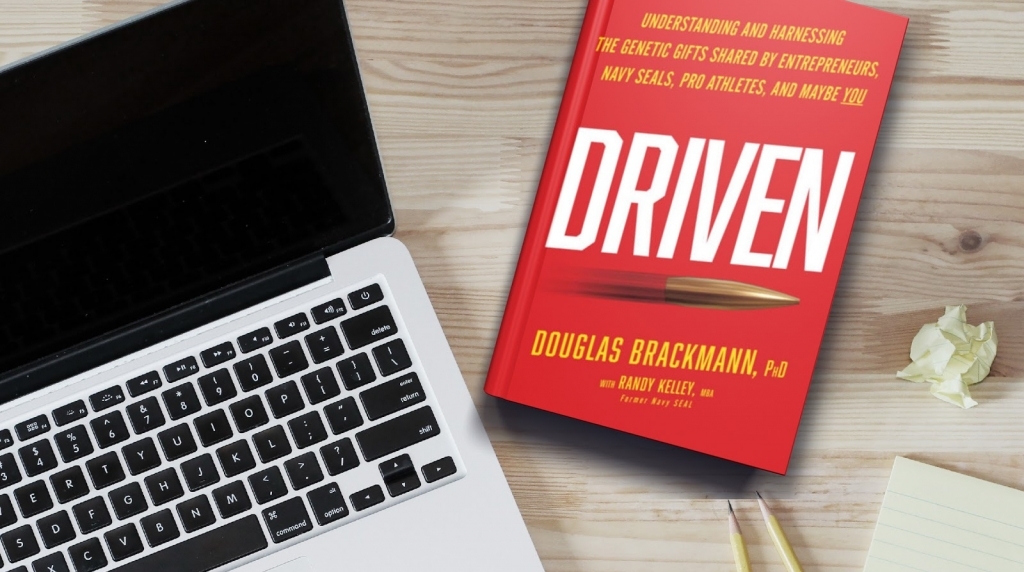 After publishing his book, Doug has grown his business, tripled his income, and has his choice of top tier clients to work with.

Though Doug primarily wrote this book to help people with ADHD, it’s been a great benefit to him as well.

In the year-and-a-half since the book came out, Doug’s tripled his income, and the book has already brought in a 10x return on the cost of working with Scribe.

“Since publishing, my world has become a lot bigger really quickly. I’m reaching people who I didn’t think I could reach, and that’s allowed me to be much more selective about who I work with.”

The positive response to the book has even been overwhelming at times. Doug’s book resonated with so many readers that now want to work with him, but Doug wasn’t expecting a rush of business to flood in so quickly after the book’s release.

As a result, Doug has faced growing pains in his business—he’s had to hire new employees and figure out how to scale his business to accommodate the new demand, which hasn’t been easy (but those are the problems he likes having).

Since publishing, Doug has also been flooded with media and speaking requests: he’s spoken at six high-profile mastermind groups and appeared on dozens of podcasts.

“It’s an incredible feeling to be able to send a book to one of your favorite podcast hosts and have them read it and go, ‘Oh my God, I gotta get this guy on.’ Before, I didn’t have that. Lately I’ve actually slowed down on the speaking and media because I can’t handle all the business—I don’t know what to do with all the phone calls.”

“The book has helped turn a lot more people into peers. The book gives a lot of context into who I am and what I do, and now the conversations start at a much more interesting level. I don’t have to educate people on any of that, because if they’re interested, they’ve already read the book.”

Doug regularly gets emails from readers that say the book has changed their lives, relationships, and their own self-understanding.

Doug’s book, Driven, teaches people who are highly driven to master their gifts and get what they want from life. Driven currently has dozens of five-star reviews on Amazon, and the reviews echo the same feedback Doug most often hears from readers:

“I feel like I’ve been freed from a thousand prisons after just a few chapters.”

“This book opened my eyes, and I felt relief that someone understands me.”

“It helps you mute the internal voice that tells you that you aren’t good enough and that something is wrong with you.”

“This book helped show me that I’m not alone.”

One reader emailed Doug and told him that the book relieved fifty years of confusion and suffering.

Another reader observed a profound difference in her husband after reading the book, and it helped her finally understand her husband’s needs instead of undermining them out of frustration.

Doug’s also had a few high-profile clients, that found him through the book, buy stacks of ten copies to give away to their friends and family.

“In many ways, the book is more impactful than anything else I could have done. The response has been overwhelming, and it’s been an amazing ride. The book has reached more people than I was anticipating, and it’s truly a gift to see them respond and be encouraged for their own futures after feeling the opposite for so long.”

And perhaps most impactful for Doug is how his father reacted to the book: 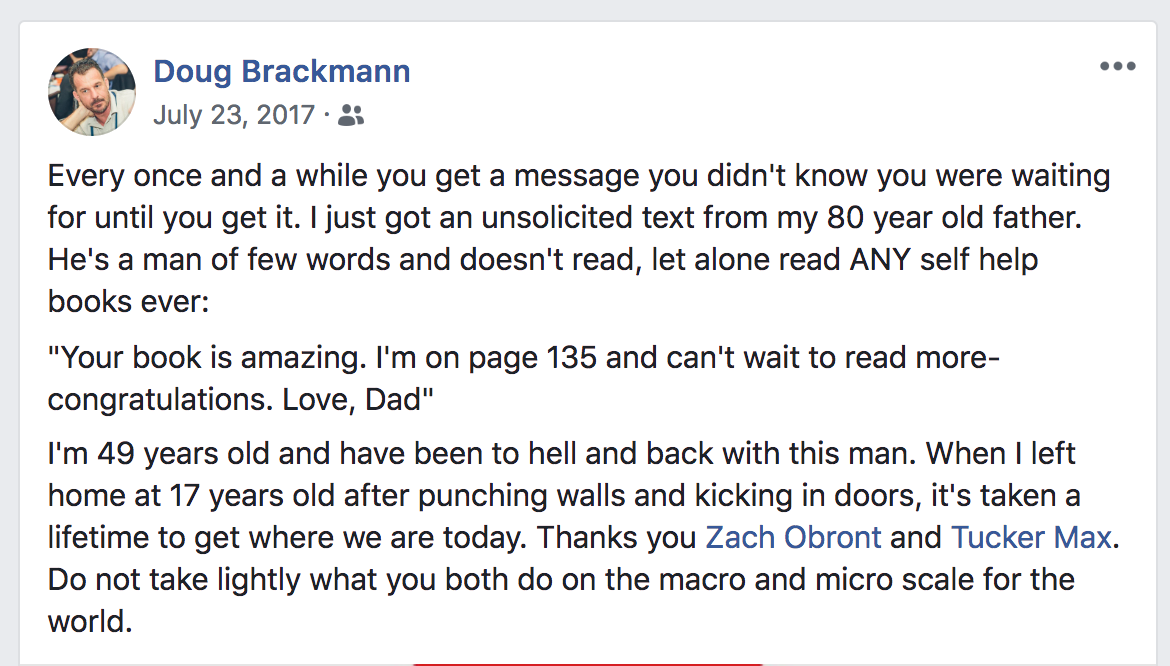