How to Write a Perfect Synopsis for Your Book (Complete Guide) 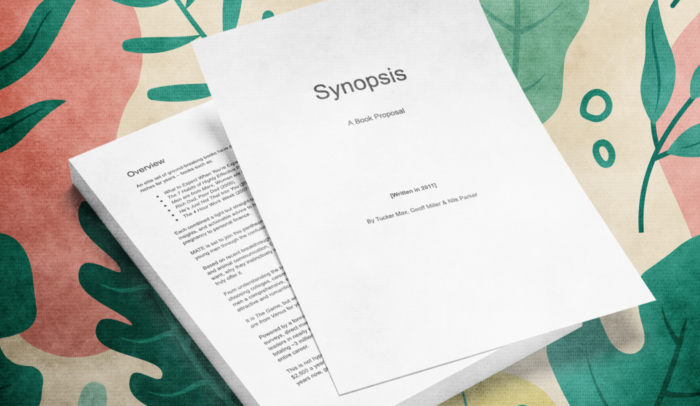 Unless you’re writing a book proposal, there’s no reason you need a book synopsis.

And the only reason you need a book proposal is if you want to get your book picked up by a traditional publisher.

For most Authors, it’s better to skip traditional publishing and self-publish instead.

There are many good reasons for that:

That said, there are some Authors whose books and goals are a better fit for a traditional publisher. If you’re one of those select few, you’ll need to write a good synopsis in order to sell your book.

This post will teach you how to write the overview section of the proposal, which gives potential agents and acquisitions editors a short synopsis of your book.

What Is a Synopsis?

A synopsis is a brief summary of the content of your book, its target audience, and its major selling points.

People are more familiar with synopses when it comes to creative writing or movie synopses. Those kinds of summaries introduce you to the main characters, major plot points, subplots, and character motivations of a story.

With a nonfiction book, the overview works differently. It’s not primarily about the content or the “main plot” of the book. Instead, it’s designed to show a potential agent or acquisitions editor at a publishing house what your book will cover, what audience will want to read it, and why it’s appealing to that audience.

Think of the overview of your book proposal as a sales letter. You want to show the reader that there are a lot of people with an urgent problem and that the content of your book is going to help them solve it.

As I said above, not all Authors need a synopsis. But I should clarify: a synopsis is not the same as a book description.

The purpose of a book description is to hook readers’ attention and convince them to keep reading. It’s what goes on the back cover of your book. Every Author needs one of those.

A synopsis is designed to walk an editor through your argument and convince them that your book is worth writing and, ultimately, worth selling.

In other words, a synopsis doesn’t focus on your idea. It’s about your book’s commercial potential.

The biggest mistake Authors make in writing synopses is talking too much about the following:

All those things sound logical, right?

But publishers don’t want to know what you—the Author—cares about or wants.

They want to know what readers care about, and more importantly, what will make a reader buy the book.

The synopsis should focus on the content just enough for the editor to understand what your book will say. It’s more important to show how that content relates to the needs, problems, and desires of your target audience.

A book proposal includes many elements, including an Author bio, marketing plan, chapter outline, and writing sample. But out of the entire proposal, the two things that will sell it are the overview (a.k.a., synopsis) and the marketing plan.

It’s critical to get those right.

How to Write a Compelling Synopsis

The goal of a synopsis is to convince an agent (and later, an acquisitions editor) that:

It’s not enough to say, “I’m writing on such-and-such subject” (even if you have data that people are interested in that subject).

For example, just because people like ice cream, it doesn’t mean they will want to buy your book on ice cream.

Your synopsis should make a clear case for why people will buy your specific book.

A compelling synopsis doesn’t only provide information; it convinces. It has to answer all the questions in an editor’s mind, including:

Acquisitions editors at traditional publishing houses like to think of their job as cultivating and curating the national conversation.

So, synopsis writing is all about persuading editors that your book is going to be the next big thing. It has to make an editor feel like they’re ahead of the curve by discovering you and your idea.

Here’s the ideal situation: an acquisition editor reads your overview and thinks, “Wow, this is really obvious, but no one sees it yet—except for me. I’ll be the one who gets to unveil this book to the world!”

If your overview does that, potential agents will be interested in it because they know that acquisition editors will want it.

Here are 2 examples of great proposals:

Those links will take you to the complete proposal, not just the overview. If you’re writing a book proposal, I recommend checking them out in their entirety.

But below, I’m only going to focus on the synopses. I’ll explain how each of them addresses the main questions in an editor’s mind.

1. Why Are People Going to Care About What You Have to Say?

In the proposal for Mate, Geoffrey and I didn’t just outline our credentials. We also explained how Mate would build on our pre-existing professional platforms.

Collectively, we had over 3 million subscribers to our email lists. We also had a clear, statistically supported breakdown of the audience who would benefit from the book: romantically frustrated young men.

We focused briefly on the origins of the idea, but when we talked about ourselves, it was mainly to show why our respective followings would care about this new collaboration.

An editor reading this would immediately know:

2. Why Is Anyone Going to Care About the Book?

He not only had access to the outrageous, impossible adventures of billionaires — he also understood the deeper psychological motivations behind them.

In other words, the book wasn’t just a riveting tell-all about journeys to the bottom of the sea or dining at the feet of Michelangelo’s David.

It was also a guide to happiness for the average person.

Steve explained how his book tapped into people’s desires for fantasy fulfillment and recognized the desire for personal growth and fulfillment.

He addressed this unique perspective with the line, “You don’t have to be a billionaire. All you need is this book.”

That’s what set his book apart and made his audience take notice.

3. What Need Is It Filling?

Geoffrey and I realized something strange was going on when a lot of my fans were looking to my drunk hook-up stories for advice.

Instead of writing these readers off, we wondered why that was happening.

What was the need they were trying to fill by reading my books? And how could we write a book that would fill that need better?

Here’s how we positioned that need in the proposal:

For Tucker, however, it was a revelation: for years he had struggled with the fact that many of his biggest fans were, to be kind, raging douchebags. At book signings, speaking engagements, parties, on the street, they would come up to him to take a picture or shake his hand and invariably their favorite parts of his books would be the parts they should be most ashamed of; the parts Tucker had included to make himself the butt of the joke.

It was no wonder so many of his male fans were such maladjusted idiots–they weren’t using those moments as cautionary tales, they were using them as a guide. But why??

The short answer: that’s all there was.

That was a turning point. It helped us understand what problem we needed to solve and what was at stake in writing Mate.

It was also crystal clear evidence for editors. It showed them how the book would fulfill an audience’s specific needs.

4. What Problem Does It Solve?

Who doesn’t want to hear about getting married by the Pope or getting chased by spies in a James Bond simulation?

That’s a great hook, but it’s not enough to sell a book. A good synopsis shows how the book will actually solve a problem.

As the proposal continued, readers learned that the real problem at the heart of the book was how to tap into the “pure joy that so many of us bury as we become successful grownups with jobs and families and responsibilities.”

Steve went on to show how those attention-grabbing stories could help solve that problem:

“Moreover, he uses these wild, colorful stories as a springboard for a deep dive into the whole concept of the bucket list, and the bigger theme of what truly matters in life. It may sound strange coming from a guy who hobnobs with the rich and famous, but if there’s one thing Steve has learned, it’s that money can’t buy you happiness.”

And here’s the solution: “Throughout the chapters, he shares his secrets for achieving the impossible and making your own bucket-list dreams come true.”

Steve’s synopsis was successful because he guided the reader through a clear story arc: hook, problem, and solution.

5. What Transformation Will It Create?

The proposal for Mate tackled the question of reader transformation head-on:

This book will help young men understand how almost everything they do in life – school, work, earning, spending, learning, socializing, sports, leisure – can help build their sexual attractiveness and mating success when they fit it together with what women really want. This will revolutionize how young men think about their whole lives, not just their dating – their whole week, not just their Friday nights.

This brief passage explained the “who,” “how,” and “why,” while also including the pain point and benefits. In just a few sentences, we showed why readers would be interested in this material.

In the first paragraph, we also compared the book to ground-breaking books that created analogous transformations. That made it immediately evident to editors what kind of market space the book could fill.

6. What Hole in People’s Lives Does It Fill?

He explained, “The words have a light, frivolous ring to them, but they hint at something deeper.”

That “something deeper” was the hole his book filled.

Steve showed the reader that his book wasn’t just about rich people looking for thrills. It was about tapping into a near-universal longing for childlike joy.

The stories in the book were about the rich and famous, but the psychological drive behind them was something his target audience would relate to.

This showed editors that the book had broader commercial potential. It wasn’t just “inside baseball” for an elite audience.