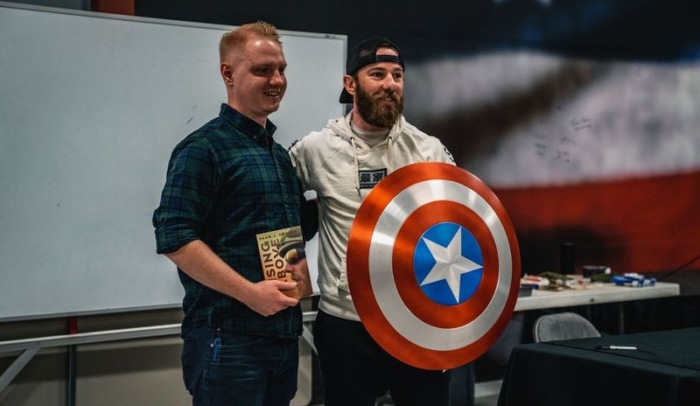 Sean Rogers is no stranger to adversity. His father walked out when he was only 1, and his mom struggled with alcoholism and an opioid addiction. The traumas he experienced as a result of having a drug addict mother and an absentee father led to deep insecurities—insecurities he tried to overcome by joining the military and entering the Special Forces.

After joining the Special Forces, though, Sean had a shocking revelation: while becoming a Green Beret empowered him, it didn’t heal him the way he hoped it would. He still felt insecure, still struggled with doubt and anger and feelings of unworthiness. And he soon realized he wasn’t the only one. Everywhere he looked, Sean saw recruits just like him—people with deep insecurities who didn’t think they were good enough.

The more he talked to other military members, the more Sean realized how widespread the problem was. Maybe, he thought, he could do something to help. After all, he knew firsthand how terrible trauma—and the insecurity it engenders—can be. Perhaps by being open and vulnerable about his own experiences, he could help other people overcome their own demons.

“My goal was to let people know it’s OK to have doubt and to struggle and to make mistakes. We don’t have to be superhumans.”

He started a YouTube channel called FNG Academy to share his struggles and how he got through them. He was determined to show other servicemen and servicewomen they weren’t alone in how they felt. They weren’t alone in wanting to quit when things got really difficult. Most of all, their struggles didn’t make them weak.

Sean dreamed of gaining the credibility that comes with being a published author. 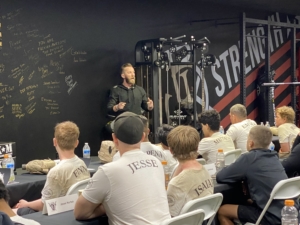 Within the first year, FNG Academy gained 85,000 subscribers. Sean’s message—that you can overcome your insecurities and achieve your dreams—resonated with people. But, despite helping so many other people to start the journey to heal their own insecurities, Sean was still struggling.

After the military, Sean had joined the Denver Police Department. While there, he struggled with PTSD and social anxiety. Things were falling apart. Sean knew something had to give.

He started writing about his past as a way to finally address those deep childhood wounds. And, as he journaled, something amazing happened: he started to experience true healing.

After journaling for months, he had an epiphany. The stories and insights he was writing down could help other people too, on an even deeper and more profound level than his YouTube channel did.

“I kept thinking about how amazing it would be to hand the book to somebody who needed it and tell them, ‘This is my journey of healing. Maybe it can help you on your own journey.’”

Sean also knew that being a published author would lend his YouTube channel credibility. By writing a book, he would establish himself as a thought leader for his audience, the same way two of his personal heroes, David Goggins and Jocko Willink, had done.

Sean was ready to become an author—except he had no idea how to navigate the publishing process.

The more Sean thought about everything he could achieve with a book, the more determined he was to make it happen. There was just one problem: all he had was a journal. He had no idea how to turn what he had written into a cohesive book.

Where would he start? Was he even capable of becoming an author?

As terrifying as the prospect of failure was, Sean has always made it a point to chase tough goals. He decided that, come hell or high water, he would experience what it was like to hold a book he had written in his hands. Sean was determined to make authorship a reality.

It wasn’t long before Sean realized that self-publishing made the most sense.

“I’m a no-name author. Nobody’s going to come knocking my door down to publish my book.”

Given his lack of publishing knowledge, though, going it completely alone was out of the question. He needed to find a company that could guide him through the entire publishing process, from cover design and layout to getting the book into the right outlets.

Sean was ready to sign up with Scribe, until he saw how much their publishing package cost.

As Sean started researching who to work with to publish his book, he realized there was one company he knew would be perfect: Scribe.

“Scribe did David Goggins’ book. I absolutely loved that book, and I knew if they had the people there with the talent to do a book like that, they could turn my book into something amazing.”

He reached out to Scribe and told them he needed help with the entire publishing process. After talking with them, he felt confident that not only could they make his book a reality, they could also help him make it exceptional. He was set to sign up.

And then he saw how much it would cost.

At first, his wife was adamantly against him spending the money to get his book published. But he explained to her that he was completely stuck. He couldn’t find any traditional publishing companies that would pick up a first-time author like him. He didn’t know how to do cover art. He didn’t have editing experience. If he didn’t sign up, he knew what would happen.

His book would never see the light of day.

Scribe, he told her, would do everything for him. After they talked some more, his wife agreed that he should sign up for Scribe’s publishing package. The only thing she asked? That some way, somehow, he make back the money he invested.

Sean’s team at Scribe quickly proved he made the right choice.

Sean sent his manuscript over to Scribe. Almost immediately, he knew he had made exactly the right decision.

“I loved the entire process, especially working with my Publishing Manager. I never had to ask where we were or what was happening. I like things rolling, so it was awesome that I always knew what to expect next.”

He felt instantly comfortable with the rest of his team, too. His editor picked up on places in his story that didn’t make sense or didn’t fit, and gave him clear, constructive, yet gentle feedback about how to make it better.

And his cover designer? She gave him three great cover options, then listened to his feedback about combining two of them together. With just a few quick back-and-forth discussions, she created a final cover that was above and beyond anything he could have envisioned.

Despite the initial shock of the price, Sean knew he made the right decision. When Scribe sent him a framed plaque of his book’s cover art, he was ecstatic. It was the perfect way to symbolize his achievement. Holding that plaque in his hands, knowing his book was out in the world, made him feel amazing.

Sean’s book was a #1 bestseller and sold thousands of copies. 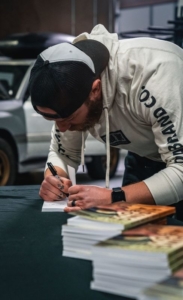 Sean published Rising Above on February 23, 2021. His main goals? To help people see that it is possible to heal trauma and insecurity, to lend credibility to his YouTube channel, and to make back what he had invested in publishing the book. On all counts, he was wildly successful.

Rising Above was a #1 bestseller on Amazon in multiple categories. Big-box stores, including Barnes and Noble, Target, and Walmart, also picked it up—a fact that surprised and delighted Sean, who never expected his book to have such a wide reach.

Really, though, it’s not all that surprising. People love the book: since being published 8 months ago, it’s sold over 6,000 copies, far more than the 250–300 copies most nonfiction books sell in the first year. And, with all those sales, Sean has made his investment back almost twice over.

The book has also succeeded at giving Sean legitimacy as a thought leader. He’s been invited to do book signings and motivational speaking events, like the one he did with Mike Glover, a well-known survivalist who is highly respected in the military community.

Just as exciting is the impact the book has had on his YouTube channel. After Rising Above’s release, Sean noticed that not only did he gain new subscribers, people were also far more engaged with the channel.

“The book connected me to my audience in a way I wouldn’t have been able to do through videos alone.”

With this newfound loyalty and engagement, Sean has even been able to conduct fundraisers for organizations like the Green Beret Foundation and the Warrior Dog Foundation. Collectively, his fundraisers have raised thousands of dollars for various organizations—and he credits their successes to the connection the book helped him foster with his audience.

Sean’s book has inspired people to embark on their own healing journeys. 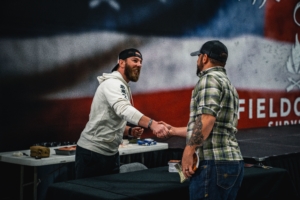 As exciting as the monetary success of the book has been, Sean’s ultimate goal was always to use his book to help people who were dealing with their own traumas. He wanted to show them that they weren’t alone… that healing was possible. For him, that is the true measure of success—and in that, too, the book exceeded his expectations.

Take the retired professional football player who reached out to him soon after the book came out. He told Sean he was molested as a child and had never dealt with it. Instead, he had tried to bury his pain through achievements. However, after reading about Sean’s journey, he was inspired to do the work to heal his childhood wounds.

He is far from the only one whom Sean has inspired in this way. Recently, someone reached out to Sean to tell him that because of the book, he has started journaling about his past. He wants to deal with the traumas that are still impacting him, and at the same time figure out how the negative experiences he’s had might be connected to good things in his life.

Sean gets lots of messages like these, and each time he does, he knows he made the right choice to write a book about his own struggles, his own healing journey.

“Getting messages from people about how much my story has helped them has been hugely impactful. Knowing I’m actually helping people is the best feeling in the world.”

Here are a few more people who have been inspired by Rising Above.