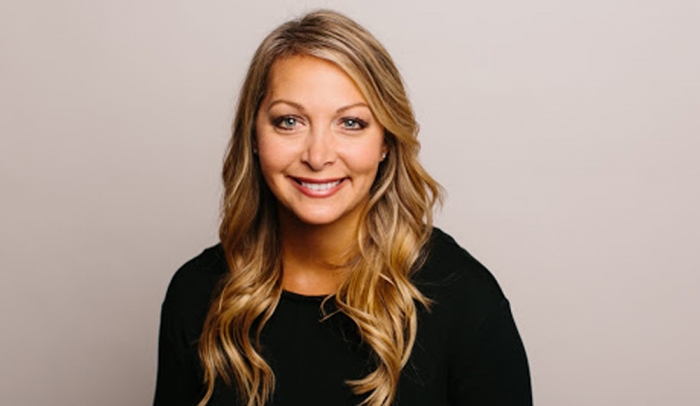 With her first child on the way, Shannon Miles faced an unfair choice: she could work full-time or not at all.

She knew a third option existed—to work part-time from home—but her idea was shot down by her boss, leaving her with the same two choices countless women are given when they decide to start a family.

For Shannon, those two choices weren’t good enough. She was going to find another way.

She went above her boss’ head and got the idea approved. What Shannon envisioned as a short-term bridge became her preferred way to work and inspired her to start a company, Belay Inc., a virtual work company built on the idea that people should have more than two choices when it comes to work.

After her life drastically improved when she began working from home, Shannon felt compelled to give other women and men the opportunity she created for herself.

Belay, which matches remote workers with companies needing virtual assistants, bookkeepers, and webmasters, gives its contractors the ability to prioritize their own lives.

“Right now, women are trapped in the choice of either working full-time outside of the house or not working at all. The reality is there’s a lot of space in between that can change the trajectory of your life and your family.”

Shannon dreamed of documenting her journey with a book 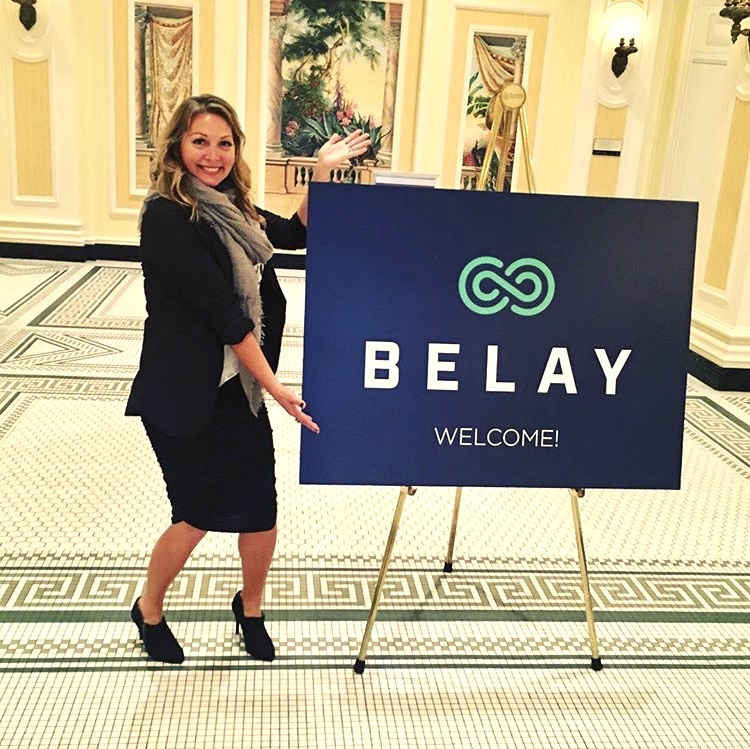 For four years, Shannon had a yearning to write a book chronicling her journey. She knew her story could inspire others who were ready to make a change.

She also wanted to reach a larger audience and recruit more women to come work at Belay, so they could benefit from control of their work schedules and their lives.

For Shannon, the switch flipped at a women’s conference in October 2016. Although the conference wasn’t about writing books, Shannon was inspired to share her story with the world. After kicking around the idea for four years, writing a book became a priority in her life.

Even so, Shannon wasn’t sure the marketplace had room for her book. She got the confidence she needed when someone at the conference opened her eyes to the truth.

“She told me the world hasn’t heard your story, in your voice, and that’s what is needed. It was a ‘get over yourself, Shannon’ type of moment for me. I realized I’m actually not writing this book for me. I’m writing it for people who need to be inspired to make a change. Once that mind shift happened, I knew I had to write it.”

She discovered writing a book was not a DIY project

Shannon tried utilizing her team at Belay to produce her book, but without a roadmap, they found themselves lost. Lacking past experience, they had no way to keep the project moving, to pull together Shannon’s many ideas, or monitor chapter completion. It was also difficult for Shannon’s staff to give their boss honest feedback when her ideas weren’t working.

Shannon craved a process with more structure. She needed someone to lay out a defined plan for outlining, writing the manuscript, and going through revisions. If she had that, she knew she would be successful, but her team wasn’t equipped to deliver her that kind of plan.

“Somebody on my team helped me outline and structure the book, but usually I would come across ideas and jot them down. I had this running Word doc of randomness. That was as far as I got because it was just really hard for me to get going.”

Without a process in place, Shannon struggled to hone the audience for her book. In trying to reach everyone, it became increasingly apparent she wouldn’t effectively reach anyone.

The longer she tried to write the book, the more doubt crept into Shannon’s mind. Would this be just another in a long line of books about work-life balance without a unique angle?

Then there was her schedule. Between being a CEO, wife, and parent, Shannon rarely had time to write, and when she did, her lack of focus, clarity, and creeping doubt stopped her book in its tracks. After four years, all she had was a mile-long Word doc filled with jumbled, disconnected thoughts. The more she stared at that document, the more she felt like a failure.

“Every time I started to gain some momentum, I would talk myself out of it.”

And so Shannon did what so many would-be authors do when faced with the overwhelming task of creating her manuscript. She put it on the back burner. Luckily, it didn’t stay there.

When noted author Michael Hyatt recommended Scribe as a way Shannon could write and launch her book, she finally saw the piece of the puzzle she’d been missing: execution.

Unlike her previous attempts to write a book, Shannon had confidence working with Scribe because they had a proven process that had produced hundreds of successful books.

Still, old doubts kept popping up as she started to work with Scribe.

“I was afraid I’d suck at writing a book, that I’d be too indecisive, take too long, that I’d get through the outline and go back to that old mindset of ‘who cares about this?’”

There was also the fear of letting down the people who supported her decision to write a book.

“I didn’t have a goal for number of books sold. I wanted my team to be proud of what I created and I think the fear of disappointing them was the biggest insecurity I had.”

These doubts and fears reared their head during the outline phase, which had previously caused Shannon so much anxiety. When the first outline she created with Scribe fell short of what she wanted for her book, her old instincts told her to shut down and check out.

But Shannon didn’t give up. Once Scribe assigned her a new outliner, she created an outline that kept the same ideas from the previous one, but improved the flow and added some much needed heart.

With the new outline, Shannon was able to hone her audience and structure her ideas in a way she’d never done before. Finally, she saw a book that would make sense to her readers.

With her fears and doubts behind her, Shannon rolled through the rest of the process with confidence. She appreciated how everyone at Scribe kept her on track and gave her a clear idea of what steps came next and what she was expected to do at each step. 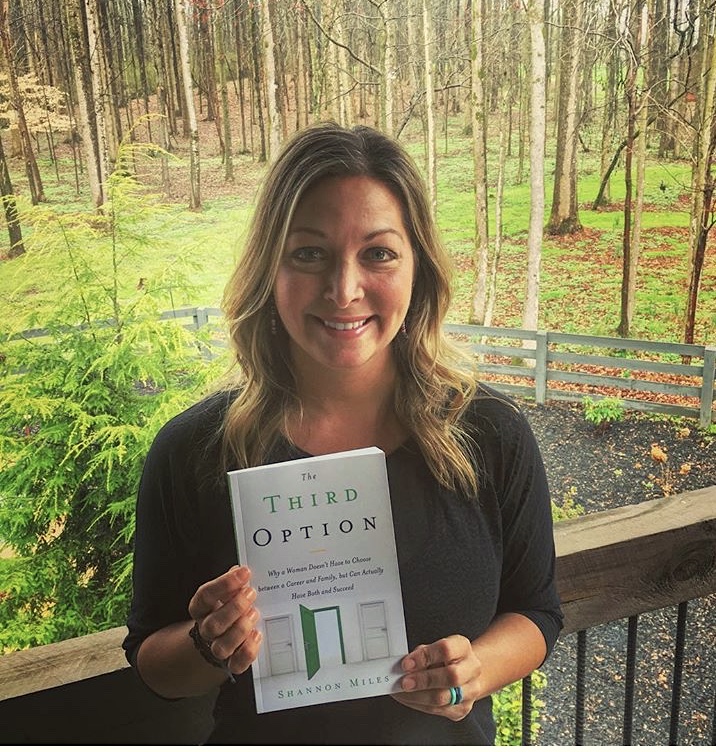 The Third Option helped elevate Shannon and her business in ways she never imagined.

It gave Belay better visibility, which resulted in the number of contractor applications per month doubling to 2,400 shortly after publication.

The book also increased Shannon’s personal authority and opened up the door to interviews and podcasts she wouldn’t have gotten otherwise.

As a CEO, having a book out made Shannon more accessible to people who didn’t know her personally and weren’t present to witness her long road to build Belay.

“There’s years of hard work and failure in my story. The book humanized me in a lot of ways, which was the scary part, but it’s also been so rewarding.”

Shannon’s book allowed her to leave a legacy, not just for her own kids, but for all women seeking control over their professional lives and stability in their personal lives.

Thousands of people have shared their triumphs with her, both corporate customers who found freedom through delegating, and contractors who left jobs that were holding them back.

One such story came out during the book launch. Shannon’s team sent her book to a screener for a podcast who later admitted to Shannon that she reads about 30 percent of a book for the interview. She was inspired by Shannon’s book, however, that she read every page of it.

“She told me she was raised by a stay-at-home mom, so she thought when she was ready to have kids, she’d have to leave her job. She felt trapped. After reading the book, she saw there was another way. That tells me, even people who aren’t ready to make a decision, the book is planting seeds for their future.”

Shannon’s book even influenced people who never read it. An Australian woman who heard Shannon telling her story on a podcast that came about because of her book was so inspired by what she heard that she decided to start her own business.

“I think that’s the coolest part about having a book. Her story is only one that I know. There are probably so many more that I don’t know, and I love that!”

Here are even more people who’ve been inspired by Shannon’s journey: