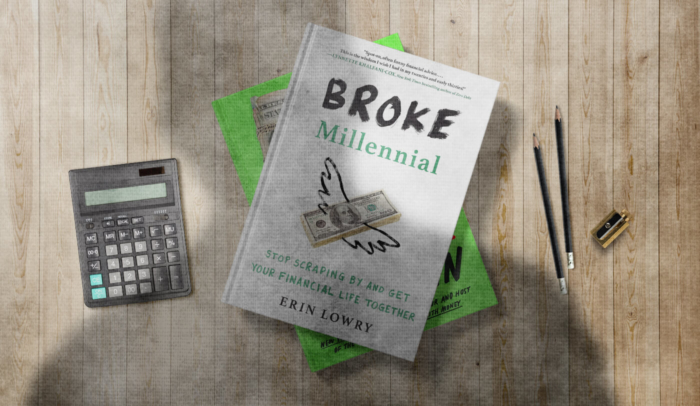 Hiring a ghostwriter for a finance book is expensive. Choosing the wrong service can lead to weeks of wasted effort and thousands of dollars on a failed ghostwriting engagement.

So how do you ensure you choose the right person to write your book? It’s simple:

Do NOT hire any freelancer or service who doesn’t have a great reputation for ghostwriting finance books.

There are a lot of scammers out there. You’ll notice that most professional ghostwriting services don’t list their pricing or any of the books they’ve done.

Any ghostwriter or company worth hiring should be transparent about the work they do and the prices they charge. If they aren’t, that’s a red flag, and you shouldn’t hire them.

Scribe has ghostwritten books for dozens of finance Authors—including financial advisors, Certified Financial Planners, and Certified Public Accountants from firms like Raymond James, Northwestern Mutual, and many other independent broker-dealers.

Their books helped them achieve various business goals, from landing more speaking gigs to doubling their AUM. They’ve also impacted their personal lives in profound ways, turning them into thought leaders and heroes in their families.

In this post, I explain why savvy finance professionals choose Scribe. Below, I cover:

Note: We’ve worked with over 2,000 nonfiction Authors, including New York Times bestsellers like David Goggins and Tiffany Haddish. Our proven process takes you from book idea to published book in less than a year. And we offer a money-back guarantee. If you’re serious about writing your book, schedule a free consultation with one of our Author Strategists.

The primary reason finance professionals hire a ghostwriting service is because they want to experience the business or personal benefits from publishing a book.

When you pay a freelancer or ghostwriting-only service to write a book for you, you’re only paying for a manuscript—not a designed, printed, marketable book ready for distribution.

Your options to publish your manuscript are managing the book publishing process on your own, at significant costs of time and money, or hiring a publishing service to do it for you.

Most finance professionals choose a publishing company like Scribe because they don’t have the time or know-how to manage the publishing process independently. This is the smart choice because:

The publishing industry has become flooded with companies who outsource all of their services, including ghostwriting, while keeping a king’s share of what you pay.

The result is a lower quality manuscript than if you’d paid a writer worth $50,000 directly.

Most publishing companies do the same thing. You’ll pay a premium, and they’ll outsource the aspects of your book to different freelancers. This includes services like:

More often than not, when a random buffet of freelancers creates your book, you end up with a low-quality book. This can be detrimental to your business as a financial professional. A poorly written or designed book hurts your credibility and does the opposite of what your book is meant to do.

In contrast to these companies, true publishing companies hire dedicated, in-house teams for everything from strategy and planning, to execution and marketing.

At Scribe, Authors are paired with a publishing manager that guides them through the entire process of ghostwriting and publishing their book.

Our teams communicate and work together to ensure you get a book that’s cohesive and consistent. As a result, the final product is significantly higher quality.

The Advantages of Choosing Scribe for Your Finance Book

After writing 4 New York Times bestsellers, I started Scribe with my cofounder Zach Obront. We designed a process to make it easier than ever for entrepreneurs, executives, and consultants to get a professional quality book ghostwritten and published—in their words and their voice.

Scribe is now the world’s #1 professional publishing company. Here are some reasons why we’re a great fit for finance professionals:

1. We Have Strict Guidelines for Hiring Ghostwriters

Becoming a ghostwriter for Scribe is more difficult than getting into Harvard. Our acceptance rate is less than 1%.

To write for us, you must have 10 years of experience and have published a minimum of 3 nonfiction books. This requirement ensures all of our writers have the same high-level pedigree.

People judge books by their covers. The difference between having a beautifully designed book and an average or poor quality design is significant.

We produce beautifully designed book covers and interior layouts for our clients because they’re more marketable and better for business.

Here are some examples of book covers we’ve created for Scribe Authors: 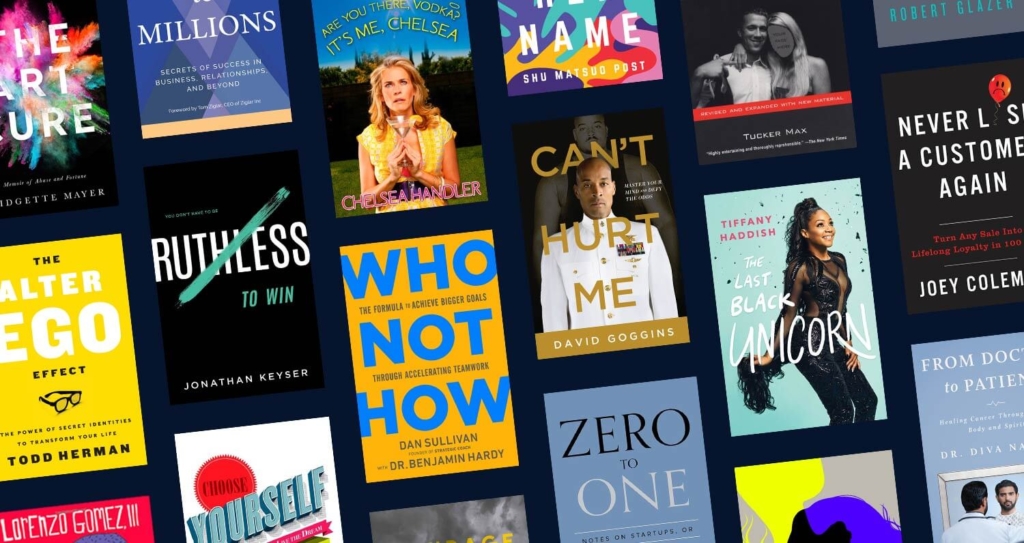 3. Marketing Strategy Is Built into Our Service

The financial planning and advisory industries are ultra competitive. Publishing a book is one of the best ways to differentiate yourself, but you have to know how to market it.

Ghostwriting-only services offer zero marketing support for your book, and most publishing companies offer a marketing consult at best (often for an additional fee).

We offer marketing support as a part of our ghostwriting package—Scribe Professional. It includes: 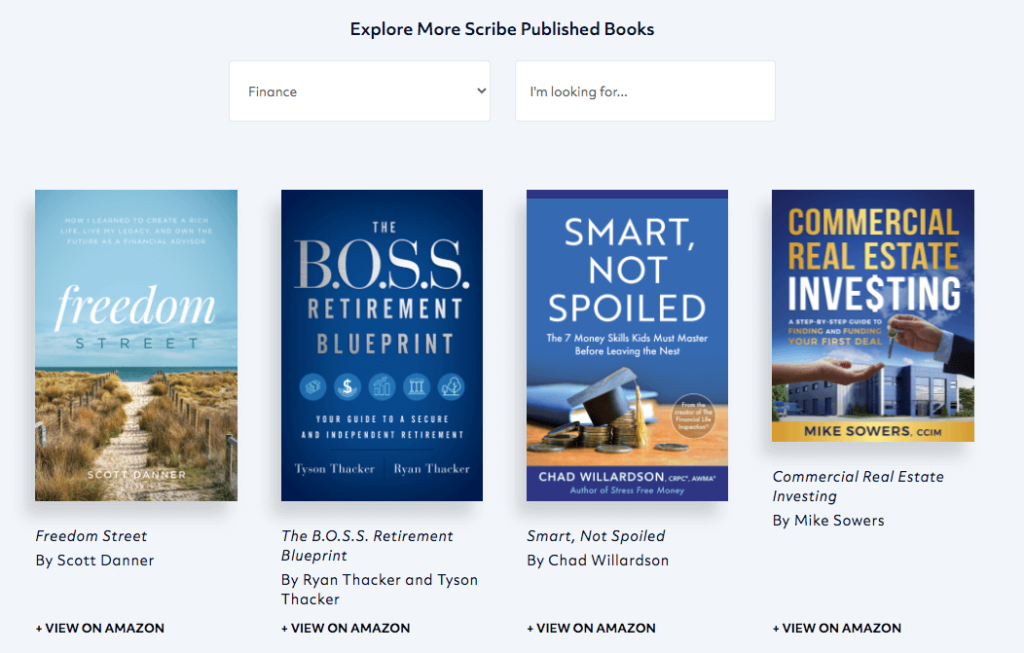 Every one of the books we’ve published is listed on our website. You can filter down to the finance category and see every finance Author we’ve helped, the books we’ve produced for them, and links to their books on Amazon.

We’ve also laid out our entire process and pricing for both of our ghostwriting services:

5. We Offer a Money Back Guarantee

We stand behind our work. If you’re unsatisfied with your experience, we’ll give you a full refund.

Financial Services Professionals Who Hired Scribe and Loved It

How One Financial Advisor’s Book Led to Speaking and Media

When Sam Marella and his brother hired a business coach to grow their financial planning business, the coach gave them 3 directives:

The brothers realized that by completing the third item, they could accomplish all 3. There was just one problem:

“I couldn’t get organized,” Sam said. “I knew what I wanted to say, but I couldn’t organize it, so I stopped even thinking about it.”

Years later, after meeting our CEO JT McCormick at a conference, he realized Scribe was exactly what he needed and gave it another shot.

After working with us, Sam found that writing a book was far easier than he thought it was going to be.

“Scribe did a phenomenal job of helping me organize my message, and put it into book form,” he said. “All I had to do was get on the phone and talk about what I already knew. It was easy.”

He had a number of new clients contact him to go over their financial situations because of it, and several retained his advisory services.

People flooded his Facebook and LinkedIn pages with comments saying how much they loved the book. 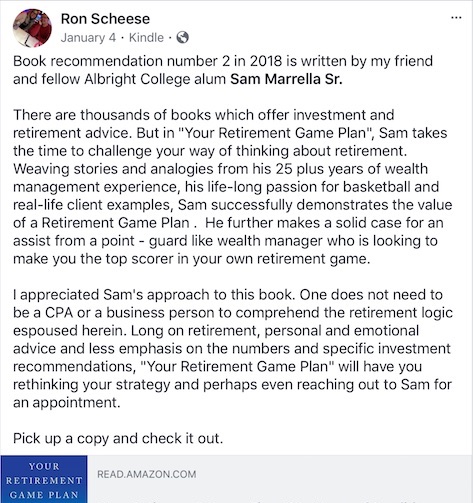 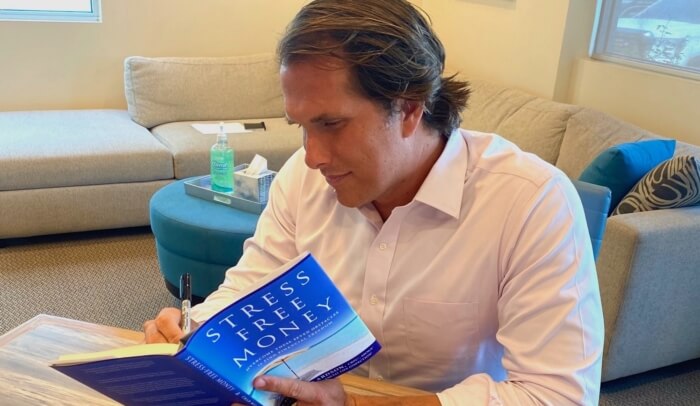 After working with hundreds of clients as a Certified Financial Fiduciary, Chad Willardson realized a book might be the best way to help busy people learn better personal finance strategies.

He had no idea where to start and realized he’d need a professional partner for his book project—which eventually led him to Scribe.

He saw we had a proven track record and was excited to work with us, but doubted whether he had enough relevant material for a book:

“I was so worried about making sure my book was worthy enough to be read,” he said. “And I was stressed about how to get it started and how to format the chapters. I was even worried about what I should call it.”

These are fears that many of our Authors face. After listening to his concerns, we gave him a framework to set up what his book would look like.

We helped him validate that he did have enough material for a book, and we went to work together making it a reality.

In just ten months, Chad’s book, Stress-Free Money, helped his firm make back 3x what they invested in the book.

“We’re based in Southern California,” he said. “As a result of the book, we got new clients from Virginia, Florida, New Jersey, Guatemala, and Switzerland, all within 6 months of the book’s release.”

How to Get Started with Scribe

Getting started with Scribe is easy. The first step to working with us is to schedule a consultation with one of our Author Strategists.

We’ll discuss your book idea and determine whether we’re a good fit to work together. If it’s a fit, we’ll pair you with a publishing manager who will guide you through the entire process.

You’ll work with an experienced ghostwriter who will perform a series of interviews with you, help you develop an outline, and then write your book. We can take you from book idea to published book in less than a year.

Are you ready to grow your financial business by becoming a published Author? Click here to schedule a consultation.

The Best Ways to Get Help with Writing a Book